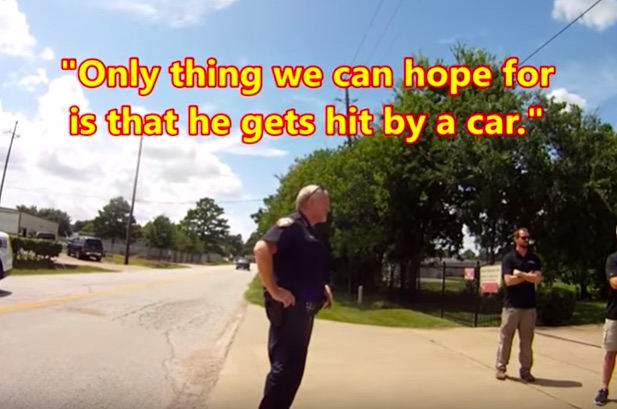 Here’s an AGW who at least admits he doesn’t care what the law says.

A man is video-recording from a public sidewalk. A super-sized AGW (your tax dollars pay double to cloth and feed this one) struts up and demands ID – which the man recording declines to provide, citing the law which doesn’t empower the AGW to demand it.

“I don’t care,” the AGW squeals. It’s a miracle the man wasn’t Hut! Hut! Hutted! for failing to just obey, regardless of “this legalistic stuff.”

The man who took the video goes on to comment about the incident and makes some sound points. Relevant points – as regards the bubbling up of what you might call I’ve had enough and I’m not going to take it anymore.

What happened the other day in Texas is a case in point. This isn’t to excuse the actions of the man who went berserk. But one can see why he went berserk. Lost his job, probably freaking out about how he’s going to pay his bills… and gets “pulled over” on the way home by an AGW over some nonsense “offense” (apparently, lane change without signaling) and loses it.

Maybe he should have signaled. But instead of a polite warning, a hand in his pocket – while the other hand holds a gun.

Give me your money.

And the guy lost his cool.

If people were left in peace, most would be peaceful. Few people are looking to hurt others and most never do – but that’s no longer enough to be left in peace.

Which is why we have this problem.

The Rump State of America