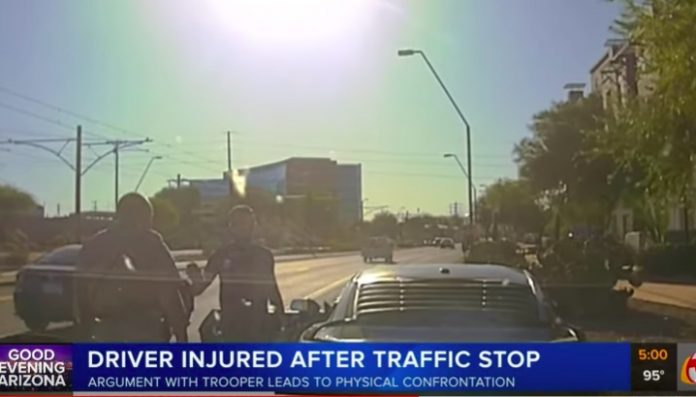 Here’s a video of a traffic stop in Tempe, AZ that neatly synopsizes the problem with what is styled “law enforcement” in this country.

Which is really: Kowtow to Our Authority.

A man is pulled over for a trivial traffic violation. The driver was on his way to the hospital t visit his mother and using the car pool lane. He explains this to the armed government worker who pulled him over – who treats the driver with contempt and derision, mocking his concern for his mother and thereby  gratuitously angering the driver, escalating the situation.

The AGW then mulcts the driver – issues him a “ticket” – rather than being a human being and issuing a warning and wishing him/his mom good luck (which would have de-escalated the situation but not been profitable).

The driver – upset now – spits at the AGW’s vehicle, which triggers a gun-drawn Hut! Hut Hutting!

The AGW curses the driver, slams him up against his car and – apparently – fractured his wrist. But the danger was greater than broken bones. The victim – unarmed – had a loaded gun pointed at him and pressed against him by an obese AGW who, at the same time, is shoving his bloated body against the driver’s. The gun could easily have discharged, even if the  angry fatty hadn’t pulled the trigger.

Mind: While spitting at an AGW’s car isn’t nice, it’s not illegal. It’s certainly not a “threat” to to the “safety” of the AGW. But it was a major affront to the AGW’s authority.

The AGW’s higher-ups issued the usual apologia – claiming the angry fatty “could not see what’s in his (he driver’s) hands…” gaslighting the unarmed victim, who was holding his insurance paperwork.

Had the AGW shot the man to death, it would have been claimed he “feared for his safety.”

All over nothing – and for nothing.

AGWs wonder why they’re despised by almost everyone – including people who’ve never committed any sort of real crime. But are sick and tired of seeing cries committed by armed government workers.