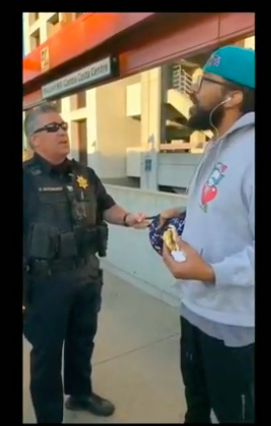 Here’s video out of California of a man being Hut! Hut! Hutted! for eating a sandwich in public. The armed government workers – a whole gang of them – accost and eventually manacle/frog-march the man into “custody” over this heinous “offense” (as distinct from a criminal act) which involved no harm to anyone.

The man hadn’t even left a wrapper on the ground.

It is apparently verboten to eat on the Bay Area Transit system (BART) and the policy is enforced with all the vigor not applied to schizophrenic squeegee men and derelicts defecating on the sidewalk.

As the country literally disintegrates, ordinary people who aren’t harming anyone or even bothering them are subjected to this kind of treatment by body-armored goons whose mission seems to be terrorizing the public rather than keeping the peace.

The utter lack of proportionality and discretion; the insolence and general turgidity of these poltroons is going to backfire on them. It already has backfired.

Why No Saaaaaaaaafety Exemption for The Little People?