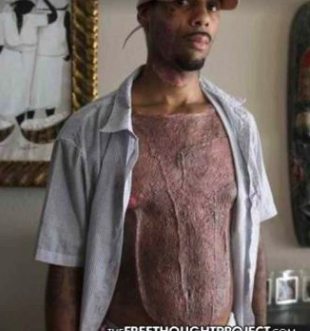 The taxpayers of Citrus Heights, CA just paid for a very expensive barbecue.

James Bradford Nelson received second and third degree burns over most of his torso, neck and face after he was thrown shirtless onto pavement heated up to 170 degrees by armed government workers   – and held down, until skin began to melt off his body.

Nelson, who apparently suffers from schizophrenia, was reported to AGWs for acting strangely in the parking lot of a fast food restaurant. He was not armed and had not committed a crime. But he attempted to get away from the AGWs, and for that received the third degree.

The lawsuit subsequently filed by Nelson’s family states: “During this time on the ground Nelson was screaming and yelling in excruciating pain . . . the officers forced his head down onto the hot pavement, leaning onto it with such force that Nelson could not move it for relief, exposing the right side of his face and neck to the scorching heat of the concrete.”

Nelson was eventually taken to the hospital where he nearly died from kidney failure and shock; he retains lifelong disfigurement – and received a six figure bill from the hospital.

“Nelson nearly died from these injuries and required months of immediate care at the UC Davis Medical Center,” according to the lawsuit.

Citrus Heights officials finally agreed to settle – using $1.2 million of other people’s money. The taxpayers who had nothing to do with this atrocity got to pay for it.

According to the SacBee:

Two weeks ago, Citrus Heights officials quietly agreed to settle the lawsuit for $1.2 million and a written promise by Nelson and his attorneys not to contact the media or discuss the settlement.

The Sacramento Bee obtained the settlement through a California Public Records Act request to the city clerk.

The settlement, which includes a stipulation that $101,603.56 go to the California Department of Health Care Services “to satisfy the lien for the reasonable value of medical services provided to Nelson,” also states that the city and the officers sued for their actions that day are not liable for any wrongdoing.

The AGWs responsible have not been charged or even fired; they continue to Hut! Hut! Hut! – whoops, “serve and protect” – the community.