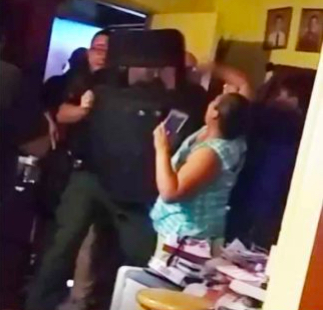 On August 20, 2018, the Yañez family of Salt Lake City, Utah was eating dinner when more than a dozen armed government workers in full Tacticool drag surrounded their home and demanded entry. The agents claimed to have a warrant but would not produce one despite repeated requests from the family.

When the family refused to let the AGWs enter without first seeing the warrant, the AGWs commended Hut! Hut! Hutting! – forcing their way in with battering rams and attacking the family. The AGWs tackled the mother, Maria, with a riot shield and pinned the father, Munir, to the ground and repeatedly shocked him with a Taser. They also pointed an assault rifle automatic rifle at a child before handcuffing him; two other children to leapt from the kitchen window to escape the Hut! Hut! Hutting!

According to the subsequent lawsuit filed against the Division of Adult Probation and Parole:

AP&P agents had approached the Yanez family several times about the location of their oldest son. That son had not lived with the family for quite some time. When agents arrived at the house again on the night of the incidents, the family refused to let them inside without a warrant and demanded that the agents leave the property. Instead, more and more agents, including some wearing body armor and carrying assault-style rifles, arrived at the home and escalated tensions by falsely telling the Yanez family they could enter their home at will. When the family refused to let them enter, the agents surrounded the home, broke down the front and back doors simultaneously using extreme force, and detained the family members, including children. The person the agents were looking for was not in the home.

The complaint also alleges that “the agents stole $7,000 in savings that the Yañez family planned to use to pay for their only daughter’s Quinceanera party”; that agents taunted Yañez, who is a U.S. citizen, on the way to jail telling him that he’d “be back in Mexico tomorrow”; that Garcia saw agents place a kitchen knife where her adult son had been tackled and handcuffed in an effort to justify his arrest; and that Garcia was told she “must know where her son is because you are a Latina.”

The Pretexts and Anti-Social Distancing

The Orange Man and the CAFE Karen