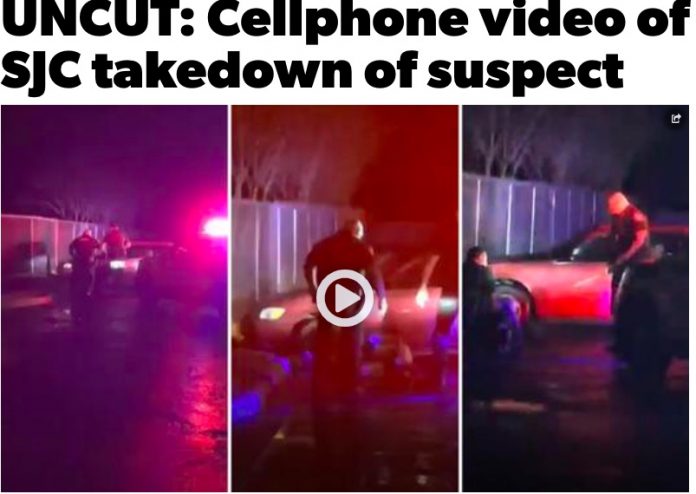 As the possibility of Coronavirus checkpoints looms larger, it’s worth considering who’ll be manning them. It’ll be armed government workers like the ones in this video, who beat a man named Christopher Butler nearly to death in the course of a penny ante traffic stop.

According to news reports, Butler  was driving below the posted speed limit, which attracted the attention of the AGWs. They pulled him over – and then pulled him out of his vehicle, applying fists, kicks and Tazers. A bystander video’d the assault.

The AGWs claim their ultraviolent Hut! Hut! Hutting! was justified because Butler was “uncooperative” and “not responding to commands.” There is no allegation that he was armed or in any way a “threat” to the “safety” of the AGWs who put him in the hospital.

And who lathered him with several charges on top of that.

Butler’s mother says “They kneed Christopher in the face and punched him in the face inside the car . . . (the) video shows once they had him on the ground they started kicking him in the face. They beat him so many times with the baton. They kept punching and my kid ended up at the hospital in critical care.”

Drug test taken at the hospital supposedly indicate that Butler was under the influence of drugs – and news coverage indicates that he had a criminal record – but nothing Butler did prior to or during the stop warranted the beatdown. Driving slow is supposed to be the apotheosis of saaaaaaaaaaaaaaaaaaaaaafe driving, isn’t it?

And regardless, Butler wasn’t violent – either to others on the road or to the AGWs. Who are now all on “paid administrative leave.”

You know – the same punishment any of us would get for beating a man half to death who hadn’t done a thing to justify it, either legally or morally.