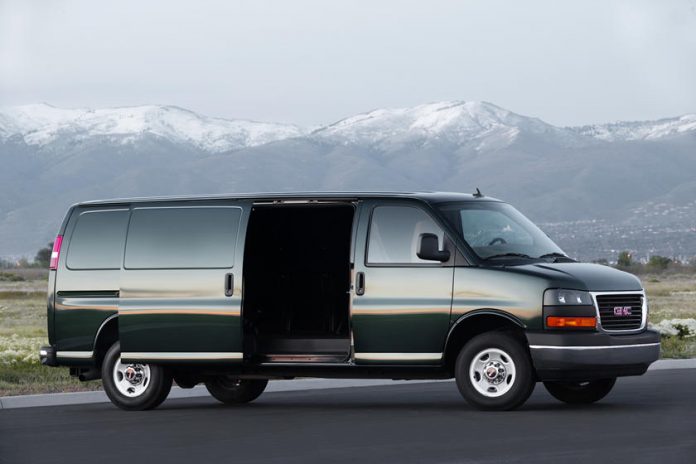 There aren’t many new vehicles that are almost 25 years old. The GMC Savana van is, in fact, the only one.

If, of course, you don’t count its Chevy-badged cousin, the Express.

Both of these super-sized (and super-duty) vans haven’t changed much since 1996 – because why would they? No one else makes vans like them anymore: Body-on-frame construction, 12-15 passenger capacity and a big V8 instead of a turbo four  . . . or a turbodiesel four  . . . or a V6, without a turbo.

Ether one offers your pick of all three.

None of the others do. 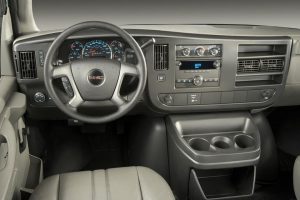 That’s not the only way they’re unlike other vans currently on the market.

Their heavy-duty rear-wheel-drive/body-on-frame layout layout enables them to pull more cargo than sort-of rivals like the Ford Transit and Ram ProMaster – while being much less pricey than the rugged but high-dollar Mercedes-Benz Sprinter van.

Though the van itself is largely the same as it was back in ’96 – in terms of how it’s built and how it looks – it offers things that weren’t available back in ’96, including the now-available Corvette-derived 6.0 liter V8 and the almost-as-powerful (but much less thirsty) 2.8 liter turbo-diesel engine.

The 2020 comes standard with things inconceivable back in ’96, such as in-vehicle WiFi. And – optionally – Lane Departure Warning and Forward Collision alert, if you want those things.

The good news is they’re still optional – if you don’t.

Rear-wheel-drive/body-on-frame construction is tough and durable.

Nothing else can carry as many – and pull as much – for as little.

What’s Not so Good 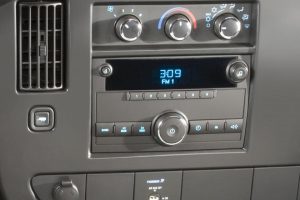 No high-roof option (Sprinter and ProMaster offer this).

The Savana comes standard with a 4.3 liter V6 that makes 276 horsepower – almost as much power as a modern V8 and much more power than comes standard in other large vans like the the Mercedes Sprinter, which don’t offer V8s. 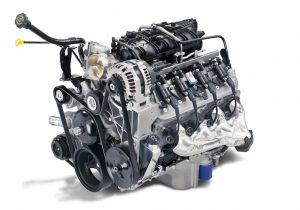 The Sprinter comes standard with a turbocharged 2.0 liter four cylinder that makes 188 horsepower – which is kind of like trying to propel an aircraft carrier with sail power.

It’s a small-bock Chevy V8, less two cylinders – but the same architecture. It’s a simple, overhead valve (and two-valve) pushrod engine, 90 degree cylinder banks and a timing chain (not belt). If you want a long-lived, low-maintenance engine, this one’s it.

You can upgrade any Savana trim to either a 6.0 liter V8 that makes 341 horsepower and 373 ft.-lbs. of torque or a 2.8 liter turbo-diesel four that makes nearly the same torque as the V8 (369 ft.-lbs.) but much at much lower engine RPM and with less appetite.

Also available – a compressed natural gas (CNG) version of the V8, which will appeal to fleet users who have access to CNG refueling facilities and to those who don’t because the CNG-powered Savana can run on gasoline, too. The CNG/gas “flex fuel” capability  adds to the buy-in cost but gives you the option of not being dependent on gasoline – or diesel. Both of which may become much more expensive down the road or much less available.

Even if not, CNG burns very cleanly. The upside there is increased maintenance intervals and – usually – even longer engine life, because CNG-fueled engines don’t crud up as much internally, over time.

This van is a hoss. It can pull as much as 7,400 lbs. – substantially more than all the other large vans except for the Mercedes Sprinter – which can pull just barely more (7,500 lbs.) but only when equipped with its optional (and also a lot extra) 3.0 liter turbodiesel V6.

The 4.3 V6 and the 2.8 liter turbodiesel both come standard with eight speed automatics; the V8 is paired with a six-speed automatic, a real plus because it’s a simpler automatic that should last as long as the engine.

Mileage ranges from 11 city, 16 highway for V8 models to about twice that for turbodiesel models. But do all the math before you pick the diesel over the V8. It uses more gas but costs about $2,500 less to buy. On the other hand, the diesel should cost less over the long haul because it should haul for longer.

It may also be the best choice for in-city/stop-and-go service because of its tremendous low-speed torque.

The V8 makes big torque as well – but not until higher speed (RPM) which means more revving.

All the vans in this class are twice as long as the typical car; the Savana (and its Chevy-badged cousin) are the only ones that are quicker than most cars.

Equipped with the optionally available 6.0 liter V8, the Savana gets a dozen people to 60 in just under seven seconds. That is quicker than several sports cars – for example, the Subaru BRZ/Toyota 86 twins, which aren’t that quick.

Which is slightly embarrassing  . . . for the twins.

Which can’t carry more than one passenger and have the advantage of weighing about 2,500 pounds less than a Savana van. 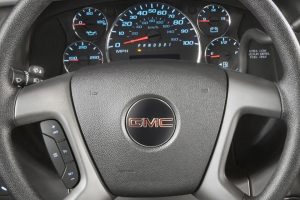 Even with the standard V6, the Savana isn’t slow – as its sort-of rivals, equipped with their standard engines, are.

There is also much to be said about the insulating effect of a body that is bolted to a frame – with a dozen rubber biscuits sandwiched in between. This layout used to be the signature. layout of luxury sedans. Nowadays, almost everything else is welded-together body-and-frame (unibody) which makes for a more rigid end product and (often) a less forgiving ride.

The Savana is, of course, a huge vehicle. But the driver sits pretty far forward relative to the hood, which makes this 244 inch-long vehicle seem not as long as it actually is. But it’s still almost four feet longer overall than a current full-sized  minivan, such as Toyota Sienna or Honda Odyssey.

So, look twice – and one more time – before you back up. 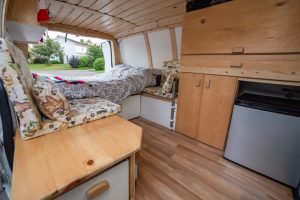 Size matters – if you want to carry all your friends (or everything) at once, without needing another van.

Those 244 inches of length translate into 252.2 cubic feet of interior space – which is almost twice the space of a current full-sized Sienna or Odyssey. Even with seats in place, the Savana’s available cargo space is almost as much as the Sienna’s or Odyssey’s without their seats in place (127.2 cubic feet).

The Savana’s more direct rivals – like the Benz Sprinter and the Ram ProMaster – are comparably roomy and offer “high roof” options that make it possible to stand upright in them, which is something the Savana doesn’t offer. 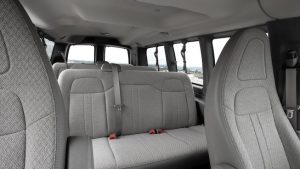 But the trade-off there is capability – and expense. The Ram can’t match the Savana’s towing capabilities – or rugged build layout.

The Benz can’t match the price – for comparable capabilities.

With that said, the Savana isn’t as nice as the Benz, which has the feel (and fit and finish) of a mutated E-Class. The steering wheel in the Sprinter looks like the same one that you’d find in the E-Class and ditto some of the switches, materials and so on.

The Savana – in base trim, at least – has the feel and general vibe of the jitney bus that takes you from the airport terminal to the rental car lot. Base trims come with 16-inch steel wheels (not a bad thing, actually), AC, power windows, locks and a two-speaker stereo. 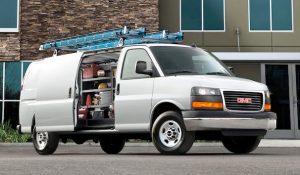 If you want more speakers – or a tilt wheel – they’re extra.

But, you can custom-conversion van the Savana into anything you want – and it’s a lot easier to add a 12 speaker upgrade audio system in place of a crappy factory stereo or captain’s chairs in place of bench seats than it is to install a V8 in place of a turbo four. 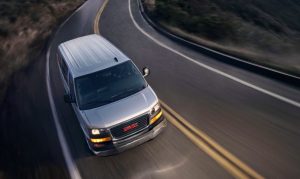 The Savana is an exception to that rule.

It costs less – and it’s better equipped as it sits.

There’s literally nothing else you can buy new that’s like the Savana – or the Express – which is probably why they have been able to get away with making the same thing for the past 25 years.