A reader has been compelled to decline a position of leadership in his church due to a Fear Masks Mandatory policy imposed by the church leadership. He wrote an Open Letter to the leadership and membership of the church explaining why he could not accept the position, given the Fear Mask Mandate. His letter is worth publishing here as well since it touches on an issue that affects all of us, everywhere:

“It is with regret, but with a sense of conviction, that I must remove myself from consideration for the Secretary position at [the church].
At the end of March, my job was cut due to lack of business from — what I consider to be — the mass hysteria surrounding COVID-19, perpetuated by the media and governments, including ours here in Ohio. This irrationality has led to record-setting unemployment, more infringement on civil liberties than I have seen in my lifetime, more corresponding government overreach and the disturbing trend of “informing” on fellow citizens.
National health adviser Dr. Anthony Fauci has publicly stated that he would favor “immunity cards” or “vaccination cards” for Americans to “prove” they are not infected by or carrying the virus. This sort of step would, in my opinion, open the door to unprecedented government restrictions on freedom of movement, financial activity and other rights. Against this backdrop, I was disheartened to see that the annual meeting would be “Masks Mandatory” for those who wished to meet at the church and that the Wednesday gathering would have the same restrictions. Masks Mandatory is a policy that I feel prolongs the COVID-19 hysteria and paves the way for the ever-increasing governmental intrusions I mentioned above.
Toward that end, I will not be attending any services, events, or meetings that are Masks Mandatory and even attending virtually, especially to be elected to a position, would to me be giving endorsement to the policy and adding to the fear and hysteria it fosters.  I also will not be contributing financially to [the church] so long as such a policy is enforced or promoted by church leadership. I do not wish to deter others from taking any protective measures they feel they should take; however, I feel this is each member’s right and responsibility to decide for themselves.
Please be assured that this is not a decision I make lightly or thoughtlessly. I have enjoyed my time at the church and would like to continue my activities with you all in the future, as well as financially contribute, but without the presumption of sickness and with the freedom to use the church facilities and to interact with other members freely, as has been the case in the past.
I chose an “open letter” format for this message because I feel it is an important enough issue for everyone to have the chance to know my views on.  I would ask that each of you consider the issue, both in terms of Masks Mandatory and the greater ramifications it portends, and decide on a course of action you wish to take.

My correspondent received the following email from his minister:

“Chris, I am sorry to hear that you’ll be leaving us, especially since I was so excited about the gifts and skills you could bring to leadership. You have the right to your opinions and I would defend your right to speak up as vociferously as I act to protect the most vulnerable people I love. I want to thank you personally and publicly for posting this as an open letter. So often people just disappear because of something they are in disagreement with and we never know why. It’s good to have clarity. For everyone’s sake. Good luck on your journey.”
(Italics added)
. . .
My correspondent’s  final thoughts as follows:
I’m not sure whether it was related, but the next day the church newsletter appeared in my email. The front page had the minister’s message, which was about masks. He wrote that he sometimes felt silly for wearing a mask against a disease that if he got, he’d very likely recover from, but he realized that Masks Mandatory wasn’t about our individual opinions, but it was about protecting our fellow humans. Therefore, that is why we all should be wearing masks, even if it made us uncomfortable.
(Italics added)

I replied to my correspondent as follows:

I applaud your decision and the caring, yet incisive way you conveyed your reasons for it.

I particularly liked that you made the point about perpetuating unwarranted fear – something which ought to be a concern to people seeking comfort at a church.

Are we to live in perpetual fear?

Because that is ultimately what this is about. An unseen “threat” that could be anywhere, might strike anyone – like “terrorism” – only even more alarming because invisible and fundamentally something that cannot be defeated. People are going to get sick – from this virus and other viruses. Some will die. Eventually, we will all die. But getting sick is part of life – and to destroy life over irrational fear of sickness is . . .  sick.

It means perpetually living in fear.

Who benefits from this? The pastor repeats the argument that Fear Masking is “about protecting our fellow humans,” which I italicized for emphasis.

This of course is false on the face of it as Fear Masking by people who aren’t sick doesn’t protect any human and in fact harms them greatly by creating the impression of ubiquitous sickness. 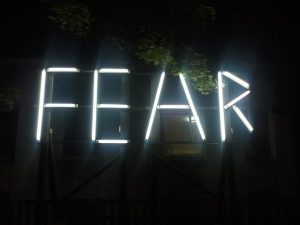 Seeing “sick” people everywhere fosters the false impression of danger everywhere. This creates mental sickness – a neurotic fear of getting sick. Which makes people miserable as they cringe in fear of “germs” and “dirty” door knobs and accepting of being treated like lepers. Or rather, leprous cattle.

Sickness Psychosis is sad enough when it afflicts a few people – e.g., the comedian Howie Mandel. But when an entire society is pressured to emulate the behavior and – inevitably – assume the bizarre routines and rituals of mentally ill people? How sad. How pathetic.

One of the horrific consequences of Fear Mask acceptance – if it is accepted – will be that normal/reasonable non-neurotic people will be first characterized as “uncaring” (as your pastor passively aggressively implies you are) and, inevitably, as criminals.

Well-meaning (but unthinking) people like your pastor do not understand this danger – despite the logic being very obvious. 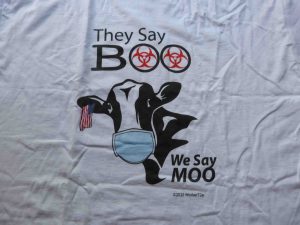 If it is accepted that Fear Masking  is “about protecting our fellow humans” then it is a threat to other humans to not wear one.

If so, that cannot be allowed – and violators must be punished. Or at least, sequestered and quarantined. Forced to submit to vaccinations. The whole population must accept limitless diminution of their (former) liberties on the basis that they might be sick and could pose a “threat” to “their fellow humans.”

There is no end to this, once the principle of presumption is accepted. This whole business is diabolically clever in the way it has weaponized fear, demoralized people and turned so many of of them into people who are not only desperate to signal their misplaced virtue by bending knee to arbitrary authority – but demand we all bend knee to it.

Solzhenitsyn wrote about this – warned about this – that most people won’t do evil things unless they can be convinced that evil things are good things. As in, it’s a good thing to deport the Kulaks. It is also worth noting that the German Nazis regarded Jews and other enemies of the regime as a biological threat to the regime; as bacilli that had to be exterminated in the name of hygiene.

Of course, most people have never read Solzhenitsyn – and the only thing they know about Nazis is the cartoonish image of goose-stepping stormtroopers and that they were “racists.”

They may soon get a refresher course in both.

It is critically important that Fear Masking be curb stomped – for reasons of mental hygiene. If this becomes the “new normal” America is over. It cannot be over-emphasized. The theater is designed to condition the populace to accept insanity – and tyranny.

It’s time to get sick, all right.