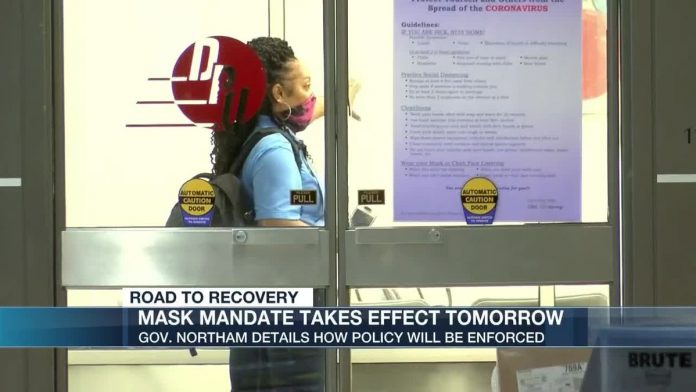 Today is the first day of the Fear Mask mandate here in Virginia – an odd thing given there’s less reason (italicized to emphasis the opposite of fear) than ever for healthy people to pretend they’re sick. We now know everyone’s not going to die – or even get sick – yet Fear Masking waxes. And has been mandated by the Coonman. Arguably, to maintain the aura of a “crisis” that serves a purpose – the perpetuation of rule by decree, the assertion of power without limit on the basis of an asserted threat that serves as a bogeyman in perpetuity – for those too addled by fear to use their brains.

Anyhow, I’m pleased to report that the first people I encountered today – at the entrance to the coffee shop where I like to go to peck at my keyboard almost every day – were not Fear Maskers. I stopped to speak with them – two younger guys – and thanked them for not giving in to the fear – and ignoring the “mandate.”

Which, as it turns out, isn’t much of one.

The Coonman himself has had to publish the exemption I wrote about the other day (more here) on the placards being posted all over the state. It says that Fear Masks must be worn inside all public accommodations – i.e., coffee shops, restaurants and so on – unless you have a  medical condition which you’re not obliged to disclose – that makes it unhealthy or unsafe for you to wear a Fear Mask.

It turns out I have a medical condition. It is Aversion to Tyranny Syndrome (ATS). It is not in the DSM but that doesn’t matter, as I am not obliged to give details; only explain that I’m not wearing a Fear Mask because of it.

Now, I fully expect the Coonman to double down on the fear by getting a law passed that requires the Fear Masks absent some recondite criteria having been met. But that will take time, which means we have time to defeat Fear Masking by refusing to.

As Nancy Reagan used to say: Just say no!

There is a motoring analog here that’s relevant. Some will remember the loathsome 55 MPH National Maximum Speed Limit – imposed by Tricky Dick Nixon back in 1974. It was among the first efforts to legislate virtue signaling and it found (and encouraged) numerous adherents, the left lane hogs and headlight flashers this writer christened Clovers – who are also today’s Fear Maskers.

But the NMSL was defeated by ridicule and refusal. There were songs made about it – including the anthem of Generation X – Sammy Hagar’s epic I Can’t Drive 55. The NMSL became unenforceable because it was made ridiculous. Everyone knew it was absurd, unjust, arbitrary and also counterproductive. Well, everyone except the Clovers – just like today’s Fear Maskers.

It was claimed that “55 Saves Lives” (after the original claim – that 55 saves gas – became a national laughingstock) but in fact, it resulted in bored/not-paying-attention drivers stultified by having to drive at speeds 10-15 MPH below the speeds that everyone was driving before the NMSL became law. These bored, inattentive drivers were more likely to not see those brake lights up ahead – or that guy walking by the side of the road.

Meanwhile, almost everyone else ignored the “new normal” – even though it meant risking a roadside mulcting, the ’70s and ’80s-era equivalents of today’s fines for not Fear Masking.

Over time, this widespread expression of contempt undermined the NMSL so severely that it could not longer be supported. And so it was repealed, in ’95.

Our task now is to make dead sure that Fear Masking – enforceable Fear Masking – is never enacted. So that we aren’t forced to spend the next 20 years working to undo the “new normal.”