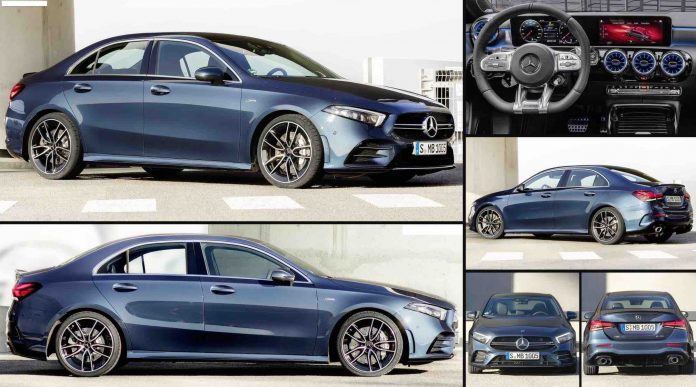 Last year, Mercedes made news by doing something Mercedes had never done before: Put the three-pointed star  . . . on a front-wheel-drive car.

Historically, up to last year, Benz cars have always been rear-drive cars – with all-wheel-drive sometimes offered. 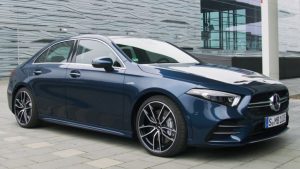 But never FWD – which for years was regarded as fundamentally an economy car layout, because almost all of them are.

Because it’s a more more practical layout in a number of ways – for the car maker and the car buyer.

FWD cars slip less, in part, because they’re pulling rather than pushing the car (the French, who pioneered the format, called it traction avant, or traction forward) and also because the weight of the engine presses down on the drive wheels, planting them better. Whereas in a front-engined/rear drive car, the tail is light because there’s nothing on top of the drive wheels but the trunk; they are thus more apt to slip when traction is low. 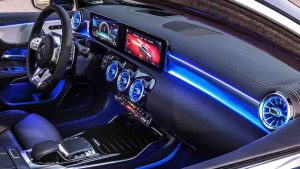 There is also the issue of packaging – how the car’s drivetrain is laid out. A rear-drive car’s drivetrain takes up more space because you have three separate components – the engine, the transmission and the rear axle, laid out over the length of the car.

In a front-drive car, the engine is mounted sideways – transversely, in car industry lingo – and the transmission and axle are mounted together, in a unit called the transaxle. This saves space – allowing more room inside the car for the passengers.

But, these practical considerations can be a problem if you’re trying to sell a performance car – or a luxury car.

Front-drive cars are nose heavy, obviously – and that’s not ideal for balance during high speed cornering and during hard acceleration, the feel is just weird vs. a rear-drive car, in part because the driven wheels also steer the car.

So, here’s danger in putting the three-pointed star on a FWD car – the new A-Class .But Mercedes did it and it doesn’t seem to be a problem.

Now it’s done something else.

The A-Class is Mercedes’ smallest, most affordable sedan. 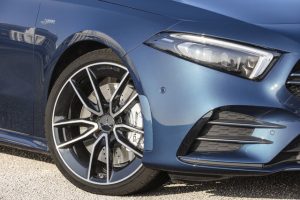 Prices start at $32,500 for the front-wheel-drive A220 with a 2.0 liter turbocharged four cylinder engine that makes 188 hp. Adding the optional 4Matic all-wheel-drive system bumps up the MSRP to $34,500.

It will sticker for $45,000 to start when it becomes available later this summer. 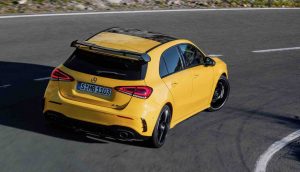 In addition to the AMG-enhanced A-Class sedan, an AMG-enhanced five-door hatchback version will also be available later this year.

It’ll give AMG A-Class buyers the same goods under the hood – with more room in the caboose.

AMG for the masses (almost).

Roomy back seat – and trunk – for such a small car.

Tap/swipe only controls for station tuning and other functions. 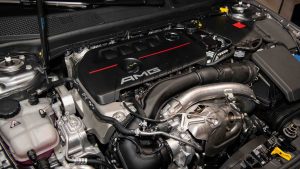 The AMG 35 is powered by a heavily modified version of the 2.0 liter four cylinder engine that comes standard in the A220. It gets more turbo boost – and a heavy-duty block and tougher internals to handle the additional boost.

Also a rippy exhaust system that can be opened up by pushing a button.

The twin-scroll-turbo’d four (the term refers to a turbo that feeds on exhaust pulses from pairs of alternating cylinders, to reduce turbo lag) is paired with a heavy-duty version of Mercedes’ 4Matic AWD system. It’s set up to mimic the feel of a rear-drive performance car by using torque distribution to counteract that weird feel FWD cars when you mash the gas. The rear wheels push the car as the front wheels pull it. No herky-jerky left-right front end dance. And a more neutral rather than understeering feel in the curves.

A seven-speed dual-clutch automatic transmission is standard, also specific to the AMG.

It features two additional driver-selectable modes, Sport+ and Slippery, the latter designed to make this high-performance car a more practical car when the weather isn’t ideal for high-performance driving  . . . the former to make the most of the performance you’ve got when it is. 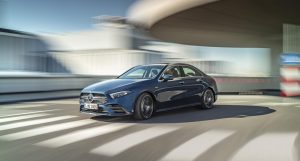 In addition to being very fast, this car teaches you to be faster.

It features the same Track Pace real-time driving coach found in higher-cost AMG models like the E53 AMG (reviewed here). This system video records your laps as you drive them, overlaying the best line as you drive, so you can correct yours while you drive.

The little AMG also has launch control – a system that turns you into a better-than-professional bracket racer at the touch of a button.

Because the system never misses a shift. Even professionals sometimes do.

But this is a Mercedes, still – and more to the point, an AMG-modded one. It’s only a beast on demand. 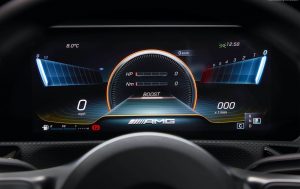 You can even turn down the exhaust note to allay suspicion.

If there’s a downside to driving this car, it’s a subjective one. By the numbers, objectively, how can you criticize a car that performs this well, without any effort? And that’s just it. The car is so sewn up, so push-button perfect, that it’s missing something.

On the track, perfection is everything. Every effort is expended to eliminate variables that might cost a tenth, which might cost the race – which costs the racer money. But on the street, perfection costs fun.

If this car didn’t hook up so  . . . perfectly, it’d lay a wonderful burnout. That would probably cost a couple of tenths. But how much fun is that worth? The good news is Mercedes has already fixed this. 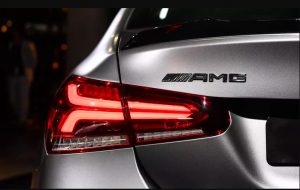 It’s just not available yet.

What it is is the A45 AMG. This one will have a 415 horsepower version of the 2.0 liter four and a “drift” version of the 4Matic AWD system specifically set up to let the tail hang wide and smoke the tires. This will be fun for sure.

It will also be a new high water mark for a production four cylinder engine. Rattle it around a little: 415 horses out of 2.0 liters. That is nearly as much horsepower as made by a Mustang GT’s 5 liter V8. And if the GT’s V8 made the same power on a displacement-equivalent basis, we’d be talking around 900 horsepower. 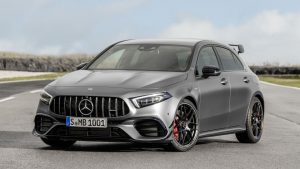 Indy car engines make this kind of power – out of not much displacement – using lots of boost. And that’s the case here, too. But this one’s good for more than 500 miles. it’s a package, not a package bomb. AMG doesn’t just bolt a turbo to a production engine and hope it all holds together long enough for the new owner to get far enough down the road that AMG will be far enough away with his money before the internals become externals.

Don’t fear. AMG engines are hand-built (“one man, one engine”) and built to exacting and comprehensive standards. Let the guy in the next lane worry. 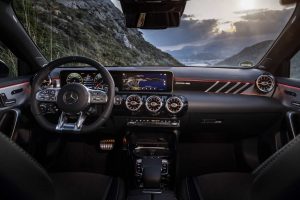 It looks like it’s read drive. See how long the front clip is. You’d never know unless you crawl under it – or pop the hood and see the sideways mounted engine.

This isn’t an imposing car, like an S or even an E-Class sedan. But it has almost everything inside that you’d find in those sedans, without as much on the outside. What that means is a dual flat-screen main gauge and secondary infotainment cluster – just like you’d find in an S-Class and more to the point, what you used to have to buy an S-Class to get. 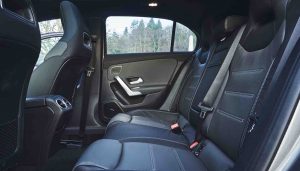 Benz has filtered the formerly exclusive down to the accessible, which will gladden those who couldn’t afford the exclusive. With one significant exception. You can’t get the masseuse that’s stitched into the S-Class’s driver and passenger’s seats. These are still exclusive to the higher-tier Benzes.

However, you can get active bolsters. These inflate and deflate subtly, as you drive, to relieve tension as you drive. Not quite the full-body massage you can get in the bigger Benzes. But you can’t have everything – at least, not for half the price. 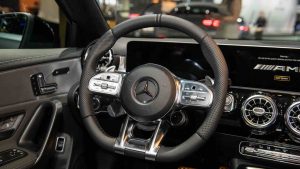 The AMG’d A also gets AMG-specific interior trim, including your choice of several available steering wheel designs – a nice touch at a time when most cars come with just one take-it-or-leave-it wheel. Also standard are AMG 18-inch wheels with “summer” performance tires (the regular A comes with 17s) as well as a dropped-in-the-weeds 3.62 inch air gap between the underbody and the asphalt.

Small sedans usually have small back seats – and trunks. This has has neither.

Though only 179.1 inches long overall (that’s about three inches smaller overall than a Toyota Corolla) it has almost 42 inches of front seat legroom and nearly 34 inches of backseat legroom. The specs say the trunk only holds 8.6 cubic feet but it’s a long trunk – extending much farther into the car than you’d expect just by looking at the small trunk lid. 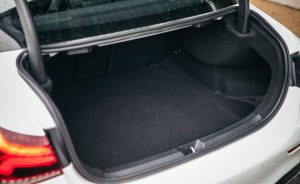 And Benz has contrived it such that the lid opens not just up but back – it almost touches the rear glass. This makes the opening more useable than some nominally larger openings.

One thing that’s maybe too high tech for its own good is the tap/swipe-only interface for several functions, including changing the radio station.

Meanwhile, there’s an elegantly simple thumbwheel on the center console for volume control. One’s easy to use; the other isn’t. 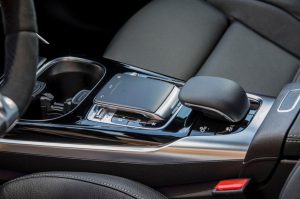 The Mercedes Benz User Experience (MBUX) which uses AI/algorithms to “hear” – and hopefully respond accurately to – verbal commands in plain, unaffected speech – is supposed to be a way to not use either, if you prefer. You can say, “hey Mercedes – change the station to (whatever you want).”

Like the tap/swipe interface, it works . . . sometimes. But never as easily as just turning a dial. This business of eliminating physical knobs and buttons just because it’s possible doesn’t mean it’s necessarily good. But it’s being done for a variety of reasons, among them – in cars of this stature – to give them something to tout that cars of lesser stature can’t. 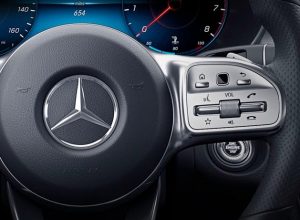 The problem, of course, is that they will – because electronics are cheap and get cheaper each year. It’s why almost all new cars – even Corollas – now have LCD touchscreens and will likely soon have dual flatscreen instrument clusters, too.

Benz might therefore give some consideration to going back in the other direction – and using beautifully and expensively crafted knobs and switches that cannot be offered in cars of lesser stature for economic reasons.

You’ll also need an adapter – if you have a device with the old (rectangular) USB plug. The new universal plugs are smaller and rounder like Apple plugs but different from the old ones, too.

The problem is many of us still have older devices – and they can’t be directly plugged in.

Happily, the A is not beset by one of the problems that besets the owner of the E and the S: Where to plug in a radar detector. They have 12v power points – if you can find them. They are located out of sight and almost out of reach on the passenger side footwell.

The A’s 12V power point is mounted accessibly in the center console.

Speed, as always, is still a question of money.

But for once, not so much money.