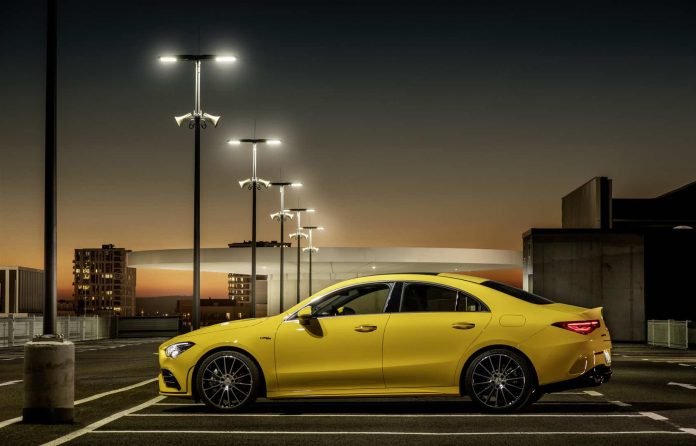 TV evangelists tell us meerakuhls happen. Maybe so. Actually so, when it comes to the seemingly limitless power being pulled out of limited displacement engines.

Have a look, for instance, at this Benz CLA  Or rather under its clamshell hood. There you’ll find not much . . . in the way of cylinders or size.

And that’s probably not the full depth of the well, either.

Only Mercedes – and Ernest – know!

The CLA is Mercedes’ other small sedan. The prettier (and faster) one

It shares a basic platform with the entry-level A-Class sedan – and comes with nothing larger than a 2.0 liter four. It also starts out front-wheel-drive, with all-wheel-drive (4Matic) available. 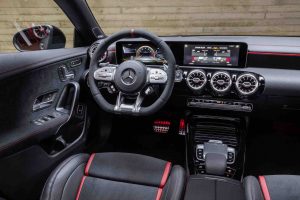 The main difference between the two is the CLA’s more raffish “coupe-like” styling – as Mercedes styles it – which means a sharper windshield rake, a lowered roofline and a stretch of about six inches to add to the sleekness of its look.

It also means a bit less headroom – but for most people, not meaningfully so – because Mercedes builds in a lot of seat adjustability such that even a driver well over six feet tall  won’t brush his head on the headliner.

Surprisingly, you get more trunk, too – 11.6 cubic feet vs. the A’s 8.6 cubic foot trunk. Which is surprising given the more upright and formally styled A-sedan looks like the more practical of the two.

Style doesn’t cost you practicality. But it doesn’t come free. 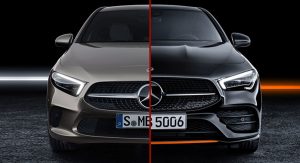 It gets the 302 hp version of the 2.0 liter engine, paired with a performance-calibrated version of the 7-speed automatic and standard AWD. This one also sits even lower to the ground and gets additional functional and cosmetic AMG-specific flourishes.

There’s also an even hotter one. 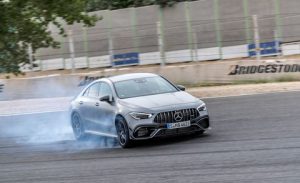 It’s the CLA 45 AMG. It also has a 2.0 liter four but hand-built (and hand-signed) and making 382 horsepower – bundled with additional performance/styling upgrades, including a drift mode that lets you smoke all four tires sideways. 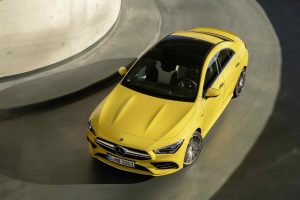 The CLA gets a major makeover for 2020 – including freshened exterior and interior styling for all trims, several inches more backseat legroom, a stronger standard engine and a stronger top-of-the-line engine in the AMG 45.

Mercedes has also added the MBUX (Mercedes Benz User Experience) voice-command interface to the CLA’s roster of standard equipment; it was introduced just a few years ago exclusively in Mercedes’s top-of-the-line S and E-Class models.

Adjusts your back via your right foot.

Almost S-Class features – for about $40k less to start than the base price of an S-Class. 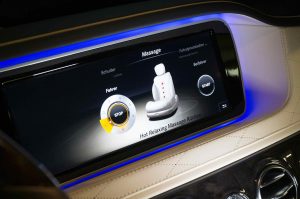 You can get just about everything that’s available in an E or an S . . . except Mercedes’ to-die-for massaging seats.

Every CLA comes standard with a 2.0 liter four. There is no optional displacement. But there are three power levels. 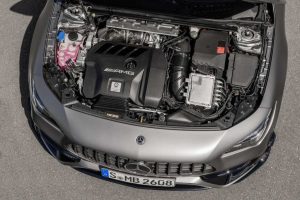 It’s also more than the rated output of the 2.0 liter engine in the CLA’s A-Class compadre, where the spec sheet says 188 hp.

The base CLA has enough power to get to 60 in 6.3 seconds while also managing 25 MPG in city driving and 35 on the highway – the latter figure in the same ballpark as several current-year economy cars.

For even quicker, Benz offers the AMG 35 version of the CLA. It also has the same displacement 2.0 liter four, but with heavier turbocharging and higher-volume injectors, among the numerous upgrades responsible for its stupendous 302 horsepower rating.

And its 4.6 second to 60 run.
East bound and down… with a big three-pointed star leading the way!

A moment’s pause for reflection. Closer in time than ’77.

Back in ’95, I got to spend a week in a brand-new Ford Mustang Cobra R – a very limited production, just-barely-street legal Mustang intended for racing. It came with a eight cylinders, 5.8 liters . . . and 300 horsepower. 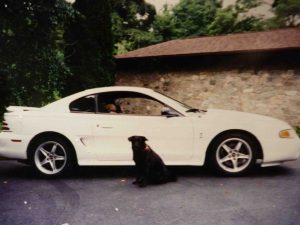 Without AC, carpets or a back seat.

The Benz has all three – plus the three-pointed star and two more horses from half the cylinders and a third the displacement.

We have come a long way, baby.

Almost as impressive as the little four’s power is its appetite, which is the one thing that is small about it. In fact, it is only slightly thirstier than the base-tuned version of the 2.0 liter four in the CLA250: 23 city, 29 highway. 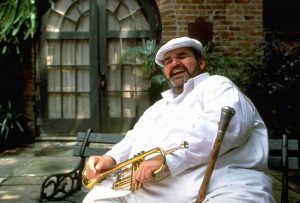 Summoning my best Paul Prudhomme cajun TV chef voice, I can guarantee you the Cobra R I drove back when never approached the Benz’s city mileage – on the highway.

But for some buyers, more is never enough. If that’s you, Mercedes offers the 45 AMG’d iterations of the CLA, the 35 and the 45.

Both have the same displacement, but other things inside. All the good stuff needed not just to make 302-382 hp but to hold up while making – and delivering it. 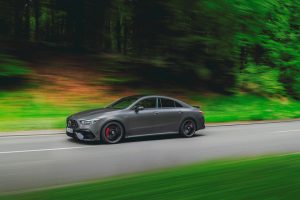 Speed is no longer a question of size – when it comes to what’s under the hood.

In AMG form, this thing is a high-rent take on popular AWD/turbo’d Rally cars like the Subaru WRX – which also has a small engine that makes big power.

But the CLA is for the grown-up who still likes to play when no one’s looking.

And who needs a car that won’t embarrass him when people are.

Of course, if you buy one in superfly electric yellow (not the actual paint code, but it ought to be) like the one Mercedes sent me to test drive, you won’t be fooling anyone about your intentions.

In which case, be sure to fill up before you act on them. So that you don’t have to stop for Smokey. 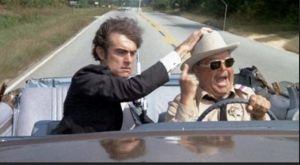 Being a small car, the Benz it has a small tank. Just 13 or so gallons – which empties almost as fast as the car goes. Not because it isn’t capable of almost-economy car mileage. But because driving this car like an economy car is like buying an ice cream cone to look at it.

The R I drove back when had a larger-capacity fuel cell and that made it feasible to make it without stopping for gas all the way from DC to NYC, which only took a bit more than two hours (read more about that here).

On the upside, it takes less time to instill 13 gallons of premium unleaded than 20 – the Cobra’s capacity. So – with the Benz – you’re ready to go fast again, sooner. 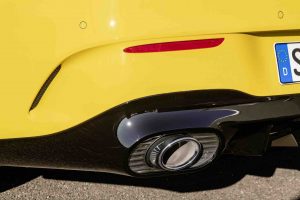 Like other AMG-massaged Benzes, the CLA versions come with an active exhaust system that works like an extra turbo – with a kind of wastegate built into the pipes that releases backpressure in time with each of the seven-speed transmission’s upshifts.

Still, it’s almost disappointingly quiet – given what it can do. That is the one piquant missing from this salsa.

It’s not because the CLA’s four is small. There are many banshee-sounding fours. But they are high-RPM fours – usually paired with a manual transmission and designed on purpose to not make much power until you make them holler. 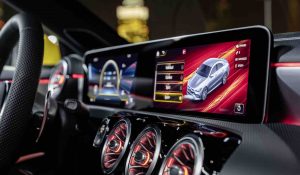 The Benz’s four relies on boost down low to make the torque of a six – right now. And in the case of the CLA 35 and CLA 45 versions, the torque of a V8. This gets you going without much revving.

But without the scream – or the burble.

Some thought might be given to adding some whistle – from the turbo. For the AMG versions, at least. These are, after all, performance cars – and performance people appreciate the sounds of performance as much as how well the car actually performs.

Why keep it a secret? 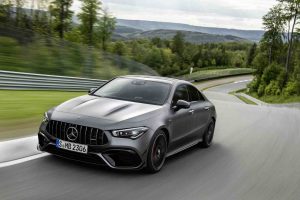 AMG versions of the CLA do get additional driver-selectable programs the non-AMG models don’t – including the new Slippery setting and, naturally, Sport+ which ramps up everything from throttle tip-in to the aggressiveness of shift points and the furiouso look of the twin flat-panel display – which is something else that used to be found exclusively in the most expensive Benz models only.

The backlighting shifts to reddish, bar readouts of boost, horsepower and torque appear.

All versions come with the godawful stop/start system (ASS, literally) that automatically cuts off the engine (and the AC, which is driven by the engine) every time the car stops moving. Then restarts it when you take your foot off the brake and press down on the gas – after a sight but noticeable delay. 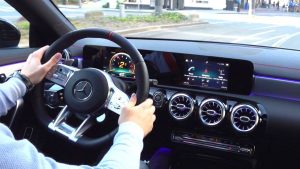 This can be turned off by pressing the button just under the ignition on button.

It’s interesting that the most stylish of the two As – the CLA – is also the more practical of the two.

At least, for the moment. 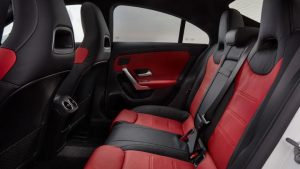 There is less headroom in the CLA.

38.5 inches for the driver and front seat passenger – sloping backward with that sexy roofline to 35.7 inches for the backseaters – vs. 40.3 inches up front in the A sedan and 37.2 in the back.

However, the lower roofline can be compensated for by lowering the seat. The back seats can’t be lowered but there’s still adequate space for most adults and kids. The CLA doesn’t pretend to be a family car. But its stylishness doesn’t preclude it from serving as one when “sedan-like” practicality is needed. 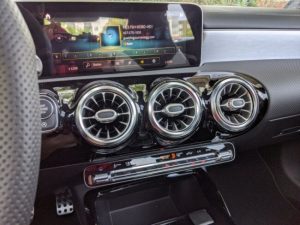 Visibility all around is surprisingly good given the abbreviated roofline and side glass – which is also frameless, adding to the elegant vibe.

The flat-bottomed, extra-thick and small-diameter AMG steering wheel – which you can order a la carte – looks almost as good as steering wheels used to look before their shape was ruined by the air bag blob.

The rest of the interior looks like an  S-Class interior on a two-thirds scale. Essentially the same dual flat-panel main gauge and secondary/infotainment cluster – fitted together in such a way as to look like a single flat panel display.

The same attractive and functionally superior ball-type air vents (superior to square ones that can direct airflow up and down/left and right but not in any direction) and cabin-suffusing ambient mood lighting, which includes the vents. 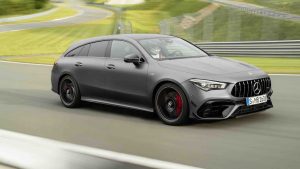 Both are available in Europe.

Also, the massaging seats that are available in the more expensive Benzes.

It is likely that even these will eventually filter down to less-expensive and even entry-level Benzes, just as the dual-flatscreens and everything else (just about) already has.

This includes the Mercedes Benz User Experience (MBUX) which you can use to talk to your Mercedes. Literally. Ask it a question. Ask it to do something. 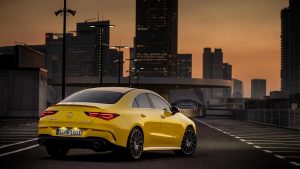 Well, almost everything. It won’t conjure a plate of hot sausages – but that, too, is probably in the works.

It used to take a big engine to get big power.