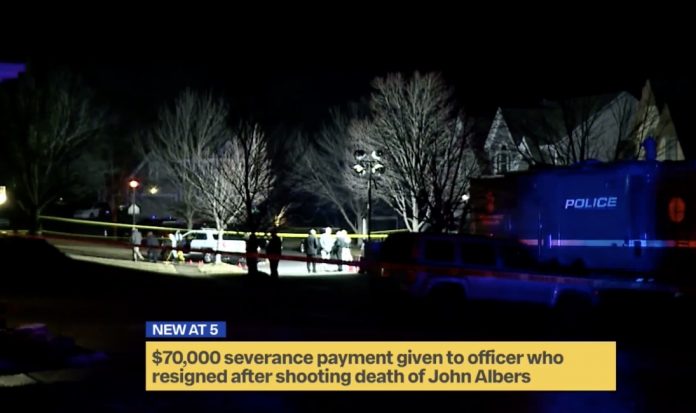 This idea that armed government workers are at war with black people is as absurd as this idea that healthy people should be walking around with a Diaper wrapped around their faces.

Armed government workers – among them lots of not-white ones – are at war with anyone who isn’t blue.

Like 17-year-old John Albers of Johnson County, KS. For the crime of being depressed, the kid was summarily executed by a gang of armed government workers. His executioner, Clayton Jenison – wasn’t charged with anything – but was given a $70k payout – courtesy of the taxpayers – to leave the county and kill in another one.

According to local affiliate WDAF, Albers’ family settled a wrongful death lawsuit against the city. They’ve still been unable to get many of the documents they requested to show how police and the DA reached the decision they did.

“In the best interest of the community, city officials negotiated an agreement with former Overland Park Police Officer Clayton Jenison, which resulted in his voluntary resignation and the city providing a final compensation package that included a severance payment as well as other benefits.”

Because their lives matter more than ours.

They say it, openly. I “feared for my safety.” Not – my life was in danger – which is the standard for us in most states with regard to the use of deadly force by us. One generally must produce heavy evidence to support the claim, too. As in the person you shot was trying to kill you.

As opposed to trying to get away from you, as the now-deceased Albers kid did. Rather than let a 17-year-old-kid back out of his driveway and maybe do a burnout to blow off teenaged steam –  Jenison shot the kid 13 times.

And now he’s free to do it again, with seven stacks to speed him on his way.