The loathsome  governor of Michigan – Gretchen Whitmer – who is an extreme Diaper-Decreer – sent her Shock Troops to a gym the other day. The crime? Working out without permission and sans Diaper.

Last week, Tino Ulicne, owner of the RTB Gym, defied Whitmer’s dictate and opened his gym to those who wanted to be their voluntarily – which of course cannot be tolerated.

Being healthy is now a crime. Also trying to earn an honest living. Ulicne told news media that his gym is on the verge of going out of business because of the Gesundheitsfuhrer’s orders.

He might had added: The Gesundheitsfuhrers are killing him – and millions of other sane Americans  – using the fear of insane Americans.

Interestingly, the one person at the gym not Hut Hut! Hutted! was apparently . . . and armed government worker. 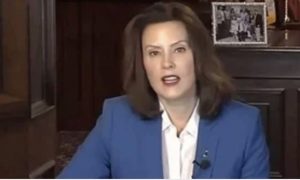 According to the Michigan Sentry, several individuals have reportedly confirmed that the individual seen leaving the gym was a plainclothes officer with the Detroit Police Department named Lamar Harris.

As the Sentry reports, according to a report from the Detroit News, Harris graduated and became an officer in 2019. They also presented photos of celebrated cookies made by Harris’ friends and family, shaped as guns and barbells, featuring his presumed badge number, 881.

Once again, the “essential” apparently are invulnerable to the WuFlu – or at least, to the restrictions and punishments applied to the rest of us.