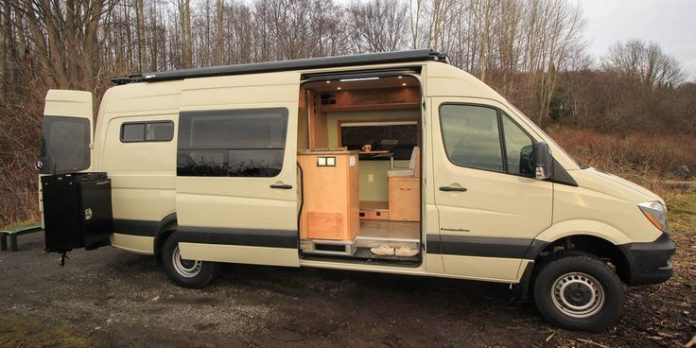 Living in a van down by the river isn’t such a bad idea – and not just because you can get away from the crazies, if that becomes necessary.

This Mercedes Sprinter van, for instance.

For openers, it’s the only new Mercedes you can still buy in the U.S. with a diesel engine. Which is a good idea, in the event the world comes unglued because diesels go farther and last longer. They also pull stronger – and that’s a boon for a van, especially one you might decide to live in.

Many people use the Sprinter van for exactly that. Because they are ideally suited for that. Mercedes offers the van in short and long wheelbase iterations (144 and 170 inches, respectively) as well as half ton (1500) and three-quarter-ton (2500) and with standard, medium or tall roof choices, a gas or diesel engine (in the 2500) and almost limitless customization options, including seats for three  . . . or fifteen.

Plus, the one thing that comes standard with every Sprinter which you can’t get in any other van:

Which means it’s a nicer van in its bones than other vans like the Dodge Ram ProMaster,  Ford Transit and Nissan NV.

Once you’re behind the wheel, it’s not hard to imagine you’re driving an E-Class sedan – because you almost are driving one. One that can take an E-Class for ride – in the back. That might be an exaggeration – the Sprinter’s max payload capacity isn’t high enough to handle a two-ton E-sedan rolled into the cargo area.

And you could absolutely pull one behind you – if you get a Sprinter with the optional 3.0 liter turbodiesel engine. It makes 325 ft.-lbs. of torque – comparable to the torque made by a typical 5 liter gas V8.

Back to behind the wheel – and the E-Class relationship. The Sprinter has a similar dash layout, including a push-button stalk gear selector, a similar LCD flat panel touchscreen with similar apps and the same art deco-looking air vents, too.

It looks and feels of a piece.

Until you turn on the stereo. Then it sounds not-Mercedes. Because the Sprinter is missing the speakers you’d get with the E-Class Mercedes. Or an A-Class, for that matter.

In the Sprinter, you get two – mounted close together, in the middle of the dashboard – which makes the sound emanating from the head unit sound almost Chevette.

But this can be fixed by adding more speakers, which is easier – and cheaper – than replacing the head unit. Mercedes no doubt expects people to do just that. Because that’s what people do with Sprinters. And it’s easy to do it because the van’s walls are bare (as it comes) and you could mount additional speakers easily, anywhere  – and many more than would fit in an E-Class.

Also a flatscreen TV. And a nice couch/bed to watch TV when you’re not driving. Maybe a sink and a fully-equipped kitchen with a ‘fridge, too. How about a bathroom with a shower? There’s plenty of room for all of that – plus more.

This van has the room you won’t find in something smaller, like a VW campwagon. It’s truly artful how much you can fit inside something that small. But it’s still . . . small. You will feel cramped living down by the river. 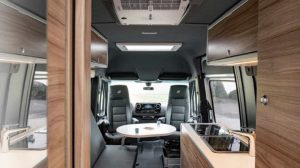 The Sprinter can be left wide open – literally. Without seats, the short wheelbase Sprinter has almost 320 cubic feet of cargo capacity. To put that in some kind of perspective, a super-sized SUV like a Chevy Suburban only has 121.7 cubic feet of cargo capacity – less than half the Sprinter’s capacity – despite the ‘Burban being only slightly smaller-footprinted  (it’s 224.4 inches long overall vs. 233.5 inches for the short-wheelbase Sprinter).

And you can increase that to an astounding 370.8 cubic feet, if you opt for the long-wheelbase Sprinter. Plenty of room down by the river!

Whatever your imagination – or needs – almost anything is possible. Or rather, more possible than with smaller/lighter-duty vans, like the front-wheel-drive Dodge Ram ProMaster. Which doesn’t offer a diesel engine. 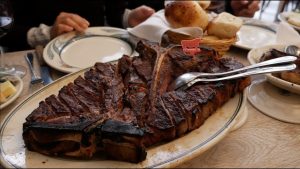 The Nissan NV van offers a V8, but not much cachet. It is dinner at McDonalds vs. Peter Lugers. A fine van for contractors but a step down if you’re looking for nice digs down by the river. Another rival – the Ford Transit – is rear drive, comes standard with a stronger V6 (gas) engine, is available with a diesel engine and offers AWD, which is unavailable in the Benz.

But the Ford isn’t quite Peter Luger’s, either.

Functional – but visually more of a piece with other Fords, like the Fusion sedan. Not that there’s anything wrong with that.

It’s just not a steak dinner at Peter Luger’s. 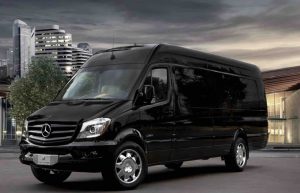 Sometimes, you don’t get what you pay for. You get less.