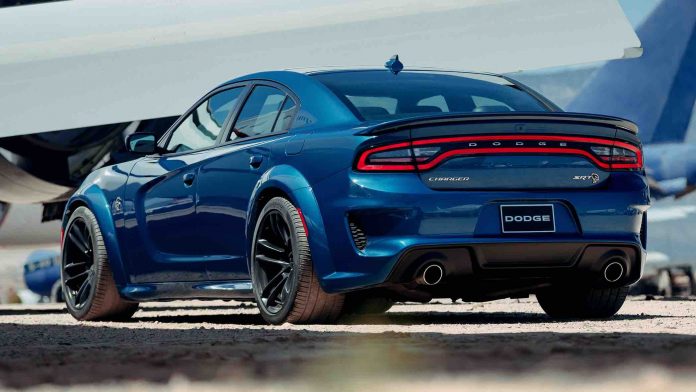 Most American cars used to be like the Dodge Charger still is.

They were big, they were rear-wheel-drive and they offered big V8 engines.

Which probably explains why the Charger is still so popular with American car buyers.

Even though other sedans no longer are. 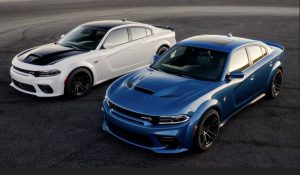 It also comes standard with a large V6 (rather than a turbocharged four) for under $30k to start. And you can buy one with a huge V8 for about the cost of a front-wheel-drive competitor equipped with its optional V6.

If it still offers the option.

Several no longer do.

Base price is $29,995 for the SXT trim with a 3.6 liter V6 paired with an eight-speed automatic and rear-wheel-drive. You can opt for all-wheel-drive (another rarity in the segment) for $33,595.

The 5.7 liter V8-equipped R/T stickers for $36,495 to start. It’s a rear-drive-only deal but that’s an option you can’t order for any sum in FWD-based sedans like the Toyota Avalon – which also costs several thousand dollars more to start than the Charger. 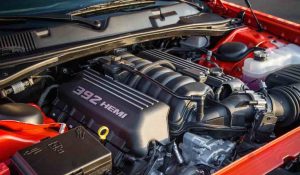 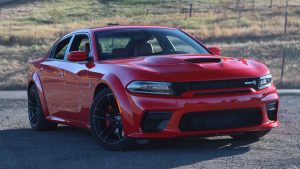 If you want bigger horsepower, Dodge has you covered there, too. The Charger Hellcat comes with a slightly smaller 6.2 liter V8 but with a supercharger to inflate its horsepower to 707.

In addition to the Wide Body option for the Scat Pack, a 50th Anniversary Daytona package is also available for the Hellcat (which comes standard with the Wide Body upgrades). The Daytona gets you another horsepower upgrade – to 717 – plus special leather seats, badging and a sure-to-be-collectible production run of just 501 copies.

That you can still buy it – literally. It’s not only still-available, it’s still affordable.

It’s the last of its kind you can still buy (excepting the Chrysler 300, which is a Charger sold by Chrysler). 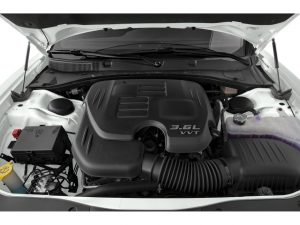 Unlike every car in its price range, all of which come standard with four cylinder engines and offer no more than V6 engines – the Charger comes standard with a 3.6 liter V6.

And there are two more upgrades to go. 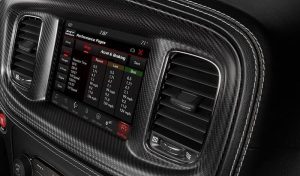 All of the Charger’s available engines are paired with an eight-speed automatic; V6-equipped Chargers come standard with rear-wheel-drive but you can opt for all-wheel-drive.

The V8 versions are all rear-wheel-drive.

Interestingly the big-engined Charger hasn’t got that big of an appetite relative to its smaller-engined (and smaller overall) rivals. The V6/RWD Charger carries an EPA rating of 19 city, 30 highway.This is only about 8 MPG less overall than the four-cylinder only (and only 192 hp) Honda Accord sedan’s 29 city, 35 highway.

And the Accord isn’t available with AWD, either. 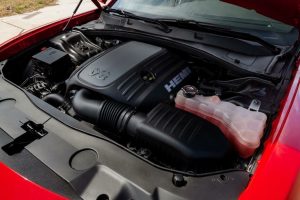 A Toyota Avalon – which comes standard with a 301 hp V6 – carries an EPA rating of 22 city, 31 highway, which is essentially the same mileage as the V6 Charger. But the Dodge  stickers for almost $6k less to start than the Avalon, which makes up and then some for that 8 MPG difference.

The supercharged 6.2 liter V8 does have a big appetite – 12 city, 21 highway  – but the astonishing thing is its appetite is almost the same as the 6.4 liter’s 15 city, 24 highway – despite the 222 horsepower difference in output.

The Hellcat also has the ability to get to 60 in less than 3 seconds. But the Scat Pack’d Charger is not far behind. 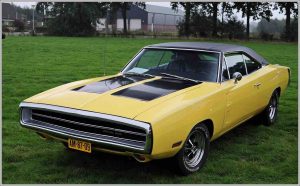 The Charger is a time machine. With four doors.

It takes you back to the ‘60s and ’70s – when almost every American car was rear-drive and large – without the ‘60s and ‘70s downsides of single digit fuel economy and double digit 0-60 acceleration.

Or the pop-on hubcaps popping off if you took corners at the speed limit.

Even though the cars of the Good Old Days did have big engines, most of them didn’t have big horsepower. The majority of them weren’t any quicker than today’s smaller-engined smaller cars.

They did have that intangible but hugely appealing V8 throb, though. You could flip the air cleaner lid and hear the four barrel moan. You could hold the brake and let the rear tires rip.

And they had that road-trip heaven “big car” ride.

So does the Charger, only more so. Better body integrity, much better sound deadening and sealing quiet it down without slowing it down. 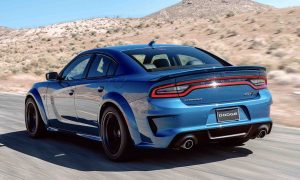 Plus, the hubcaps don’t pop off in the curves at 20 over the speed limit. There’s no four barrel carb but the burnouts you can do don’t require neutral-dropping the transmission or even power-braking the thing. Just let ‘er rip.

And then there is speed.

Armed with its available smallest V8, the Charger is one of the quickest fours doors on the road – then or now.

It’s not quite as quick as a V6 Camry or Avalon (they’re both much lighter) but the feel of its quickness is more authoritative. A .38 will kill a can of beans at 20 yards but a shotgun does it more pleasingly.

And the sound can’t be beat. 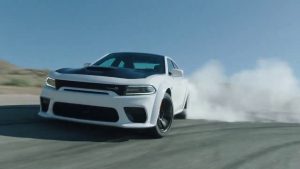 If upgraded to its bigger V8, it leaves the V6s sucking wind. Now you’re in the low fours – a real-world lesson in physics. About power overcoming weight. This version of the Charger is the quickest thing with four doors on the road . . . unless you pay twice or more as much as what Dodge asks for it.

And the sound of this one is priceless.

With its top-dog V8 (which comes with the unique sound of supercharger gear whine) there’s not much period that can keep up with it – including things with no doors at all, like superbikes.

And you can’t take four of your friends along for the three seconds to 60 ride. 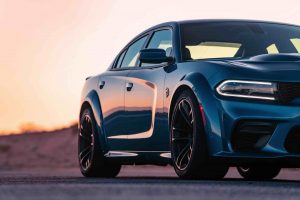 This is a ballsy looking sedan.

It’s an intimidating-looking sedan in Widebody configuration, with its massive pontoon fenders and lowered ride height.

All that’s missing is a three foot wing on the trunk – like the ’70 Charger Daytona had.

But the brash appearance hides a family friendly large sedan that makes a stronger argument for itself in that  role because it is big and so has lots of room – something the smaller fry sedans haven’t got, in addition to not having anything big to offer under their hoods. 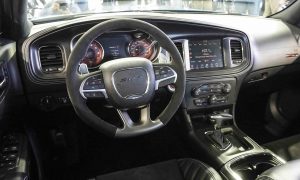 These attributes make it a great choice for a family car that’s a lot more fun to drive than  a typical family car.

Big is also inherently safe. Others tout “advanced” driver assistance technologies.This one touts steel. It is a car that can absorb a hit – with less damage – than the smaller/lighter cars in the same price range.

It’s built more like a truck than a modern car – which is just how American cars used to be built. They may have been gas hogs, but they also didn’t get totaled in what used to be low-speed fender benders.

Neither does the Charger. 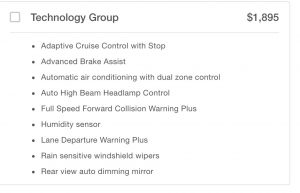 The only thing weak about this car is its standard three year/36,000 mile warranty coverage – which isn’t much better than American cars offered back in the ‘70s. But, the Charger’s physical toughness and the relative simplicity of its V6 and V8 engines – as opposed to the heavily turbocharged small fours common in the segment – are safe bets of a different sort.

The 2020 Charger is largely the same as the 2007 Charger, too – so we have a long-established track record to check out.

Which brings up a related point. Because it is old – design-wise – but new, odometer-wise  – you can avoid many of the “advanced” safety assists and other annoyances that are making new cars insufferably naggy. The Charger doesn’t pester you with lights and buzzers  . . . unless you want it to. 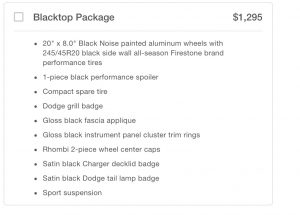 A Technology Package – with Advanced Brake Assist (the car applies the brakes, including when it’s not necessary) and Lane Departure Warning which harasses you with lights and noise if your tires touch a painted shoulder or yellow center line – is available. But you can skip it – and save yourself $1,895 as well as the nagging.

Almost every other car in the class comes with such “Advances” standard – which means you pay for it. Dodge lets you decide to not pay for it. Put the money in your pocket instead. 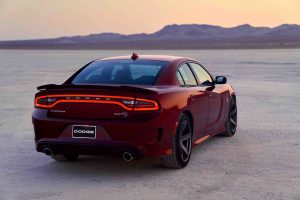 Or put it toward other things – like the Blacktop Package (available with the base SXT trim) which gets you 20×8 inch wheels with two-piece Rhombi center caps and 45-series tires, sport-tuned suspension, Nappa leather seats with heaters for both rows and a 276 watt amp with upgraded speakers – for $1,295.

And keep the change.

Living large is still possible – but who knows for how much longer. If the Hair Plugged Man defeats the Orange Man and the Green New Deal comes onine,

This may be your last chance to get the last of the Mohicans.