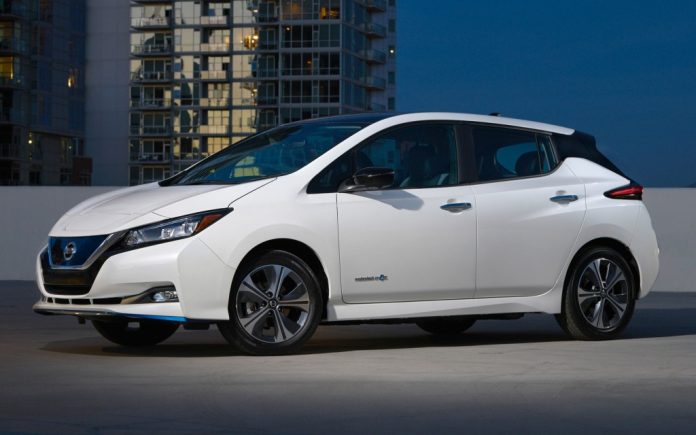 How much are you willing to spend on a car to spend nothing on gas?

This question arises – or ought to arise – whenever electric cars are discussed.

Especially an electric car like the Nissan Leaf, which – unlike a Tesla3 or Model Y – isn’t ludicrously fast or the least bit sexy.

What it has going for it, chiefly, is that it’s a lot less expensive than a Tesla Model Y – and a lot more practical than a Tesla Model 3, which is an electric sedan with a small trunk vs. the hatchback’d Leaf’s much larger cargo area. 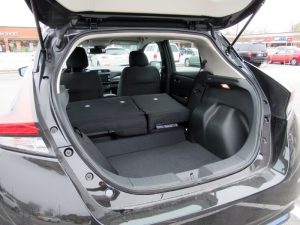 But it has a number of things not-going for it, too – chief among the downsides being newer/more practical rivals.

The Leaf is Nissan’s entry into the electric car arena.

It’s available in standard range (150 miles) and extended range (225 miles) versions, with prices beginning at $31,600 for the base S trim with the less powerful 150-mile range battery and topping out at $43,900 for the SL Plus trim with the 226-mile higher-performance battery.

You can also buy the less expensive S trim with the higher-performance battery (S Plus) for $38,200. 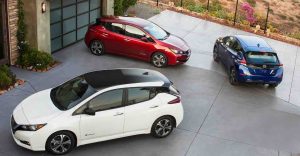 The Leaf’s most direct rival is the Chevy Bolt, which though more expensive ($36,200 to start) is also a hatchback with cargo space rather than a trunk that emphasizes practicality over sex appeal and speed.

Another possible cross-shop is the Kia Niro EV, which is also a practically laid-out hatchback that’s about the same size as the Leaf. But it’s even more expensive – just under $40,000 to start – which gives the advantage to the Leaf.

If the math matters to you. 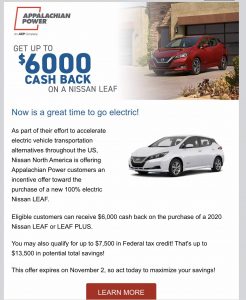 2021 is a carryover year before what is expected to be a major reboot of the Leaf for the 2022 model year. Which means you could probably get a really good deal on this Leaf, which Nissan has been massively discounting by as much as $6,000 off the MSRP – in addition to whatever you can take off your taxes for the electric car credit.

But it also means that if the 2022 Leaf comes standard with more range for about the same or even less money, your ’21 will probably depreciate even faster than electric cars already depreciate – which is much more and much sooner than non-electric cars, because of the shorter life and high replacement cost of electric car batteries.

We’ll get to the math shortly.

Base S trim is the most affordable electric car on the market.

Base S trim has the shortest range of any electric car on the market.

Less backseat legroom than others in the class.

The base Leaf comes with a 1-speed electric motor directly powering the front wheels, fed by a battery pack capable of holding enough charge to let you travel up to about 150 miles before you have to stop to recharge – which takes about 7.5 hours on standard 120V household current. 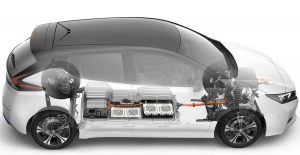 Plus models get a larger, stronger battery that increases the Leaf’s range to about 226 miles – but the time to recharge also increases, to 11.5 hours (on 120V household current).

The Leaf’s closest-in-cost rival, the Chevy Bolt, comes standard with a 259-mile range and a 10 hour recharge time.

All can be recharged faster, but only if you have access to a fast charging system, either at home or wherever you stop. These will get you back on the road in under an hour (though not fully recharged in under an hour). Be aware that you’ll probably need to have some wiring work done at your home if you want to fast charge at home, since most homes were not wired for EV charging when they were built. 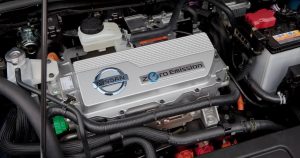 Be sure to add the cost of the electrician – and the necessary components – into your figuring.

The base 150-mile Leaf does not come standard with fast-charge capability. If you want to get going in less than several hours, add $1,690 to the Leaf’s price – the cost of the Charge Package.

Plus models come standard with it – but of course, you’re also paying a lot more for it.

It feels quicker than it is, too – and is much quieter. Almost silent, which is a weird experience if you’ve never driven an electric car.

All of the torque developed by the Leaf’s electric motor is available immediately, which is an inarguable EV advantage. And EV motors also generate enormous torque – another inarguable EV advantage. The Leaf’s electric motor produces 236 ft-lbs. of torque at zero RPM. The torque number is comparable to that of a gas-burning 3 liter V6 engine – but without any revving to reach it.

From a dead stop and in stop and go traffic, the Leaf launches with more authority than any IC economy car and some IC performance cars. You can use this – plus the car’s silence – to get the drop on traffic, thread through holes and make your own holes.

Keep in mind, however, that everything that’s powered in an electric car is powered by the battery pack, including the heater, the AC and headlights. Use of these accessories will reduce your range, as will high-speed driving and “fast” starts.

This is equally true as regards driving a non-electric car hard – and using power-driven accessories such as the AC. But the big difference is you don’t have to worry about it because you can quickly refuel a non-electric car’s tank while it takes much longer to instill even a partial charge in an EV’s battery. This makes being aware of how much electricity you have left in the battery more immediately important than how much gas you’ve got left in the tank. 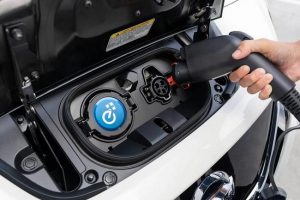 Driving the Leaf means watching the range left as much as the road – because it determines not merely how soon you’ll have to stop but how long you’ll have to wait. Which could be hours, if you can’t find a “fast” charger – a real threat because they are not like gas stations, just around the corner or a couple of miles down the road. The next-nearest one might be too-many-miles down the road for the range you have left.

However, an EV can also do something that gas-powered cars can’t – which is to recover power without stopping by using inertia. What this means is that although you’ll lose a lot of range going up a hill – which takes power – you can recover it going down the hill, which uses no power. The wheels act as generators, using the rolling of the car to recharge. 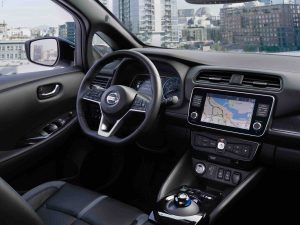 Hybrids do the same thing. EVs do it, too.

Other than that, the Leaf drives like what it is, which is a basic A to B appliance.

It’s much heavier than a non-electric A to B transportation appliance – close to 4,000 lbs. for the Plus model, chiefly because of the weight of its batteries – but the weight is only obvious in the curves and only if you’re going fast – which is contra the point of owning a car like this.

Faulting it for feeling heavy in the corners would be like denouncing a Corvette for being terrible in the snow.

The Leaf is probably better in the snow than most A to B appliances precisely because it is so heavy. More precisely, because there is so much weight over the drive wheels, which is always a traction advantage (one of the first front-drive cars was called the Traction Avant for just that reason; the weight of the engine over the drive wheels gave it a traction advantage over rear-drive cars with not much weight over their drive wheels). 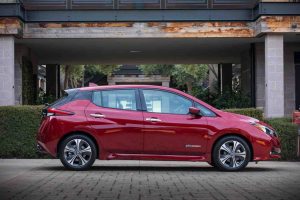 When the Leaf came out, it boasted much more practicality than sex-appeal EVs like the Tesla3 – with its tiny 15 cubic foot trunk. The hatchback’d Leaf has twice as much cargo space – 30 cubic feet behind its third row.

That gives it more working room for stuff than any full-sized sedan on the road – which explains why hatches (and crossovers, which are similarly laid out) have become much more popular than sedans, especially the small ones. 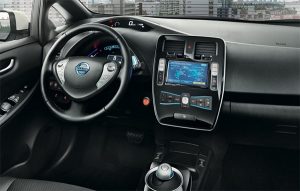 Ditto the Niro EV, which has 53 cubic feet of total cargo capacity, 18.5 cubic feet behind its backseats and 36 inches of backseat legroom.

There’s another comparison that’s more fair – in terms of not getting what you’re paying for vs. a non-electric equivalent. The Leaf is a very basic car as it comes, given what it costs – if you set aside its electric car guts.

The base S includes AC, a tilt-only wheel and an 8-inch LCD touchscreen – plus a bevy of “safety” and “driver assistance” apps. The thing is, you’d get the same in a $17k non-electric equivalent, like Nissan’s Versa, for instance.

You can get amenities such as leather trim, an upgraded audio system, power seats and LED lights – plus an updated dash layout – but now you’re pushing almost $40k for what is still the amenities-equivalent of a well-equipped entry-level compact hatchback that would cost you $15-20k less – and go twice as far before you had to stop.

It’s hard to make an economic case for any EV, even this most-affordable of EVs. And not just because it’s doubtful you’ll ever recover the roughly $15k-$20k difference in cost to buy via not buying gas vs. buying an otherwise similar but not-electric transportation appliance that dos burn gas. 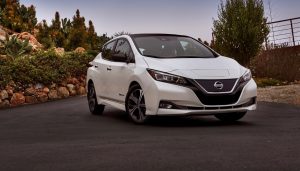 There is the additional hidden cost of battery replacement, which is an inevitable part of EV ownership because all EV batteries lose their capacity to hold a charge over time.

Which time is less than the usual 15-20 year lifespan of almost any new car.

The problem isn’t just the expense of replacing a tired battery, either. It is the cost of replacing the tired battery – generally around $5,000 – vs. the depreciated value of the EV itself by the time it needs a new battery.

This is why you can find 5-6 year old used Leafs on the market for less than $10k.

Another cost to consider is the how much time you’ll spend plugged in.

It’s true one can avoid waiting by plugging in overnight, while you sleep. But life sometimes requires spur-of-the-moment driving and having to plan around charging and waiting can be a hassle.

A test drive of any EV you might be in the market for is even more important than a test drive in a non-electric car. Drive the thing from your home to work and back and see if you can do that without having to stop – and wait. Factor in a range cushion of at least 20-30 miles, too. Because your range will vary.

And don’t forget to consider the effect of cold – and heat – on range.

Your range will decrease in winter – and in summer.

The Leaf still has practicality and lower cost going for it.

But only relative to even more expensive EVs.