I spoke yesterday with Bill Meyer, who hosts the Bill Meyer Show in Oregon. We talked, among other things, about the explosive fact that in states like VA and CA, a geographically tiny canker sore of urban density has achieved almost unassailable political control over the entire state.

For example, in my state – Virginia – 85 percent of the state, by geography, voted for the Orange Man but because of Northern Va and Richmond, which are hives of government workers (which means government-lovers)  the state fell to the Hair Plugged Man. 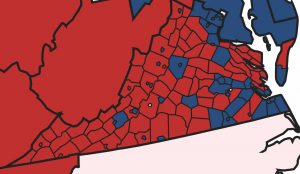 The people no longer have a voice.

Because some people control the state.

What happens when the people of a state are disfranchised? When they come to know that their vote doesn’t matter? Is it equitable that a geographically and proportionately tiny part of a state dictates to the rest of the state?

By what right does a Beltway bureaucrat autocratically govern the lives of farmers who live hundreds of miles away? The Coonman is the governor of Northern Virginia. He is loathed in most of Virginia. But the people of the rest of the state cannot vote him out of their lives because their votes don’t matter. Northern Virginia decides the politics of Virginia.

Do we not adhere to the idea of the consent of the governed? How can there be consent when there is no choice?  This is not about red vs. blue. It is about right vs. wrong.

It is time for a parting of the ways.

Before it comes to blows.

This is a natural evolution.

People change – and with them, politics. It is unnatural to force them to pretend to be the same people when they are manifestly so different.

They must be allowed to separate.

Many of the western states were once much larger.

They became smaller by division.

There is a North Carolina and a South Carolina. Why not a Northern Virginia and a Southern Virginia? West Virginia was once part of Virginia. It is now a separate state. (Ironically, at the behest of the man who claimed to revile separation, Abraham Lincoln, who cut West Virginia away from “rebellious” Virginia, which no longer wished to be governed by the alien people of the north.) 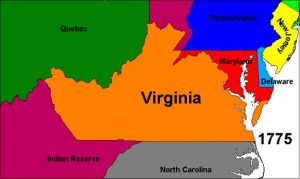 There is no intrinsically necessary reason for any state to remain a single geographic and political bloc in perpetuity – and some very sound reasons for separation when the people of a consolidated state have become so divided, politically and geographically, as to make them separate people.

It does not mean they are not still Americans. But it does mean that a Northern Virginian is not a Southern Virginian. The two can coexist in the same country, perhaps. But not in the same state, under the consolidated rule of one of them.

If it weren’t for cognitive dissonance, these irreconcilable political differences would be acknowledged and acted upon – peacefully.

Before it becomes impossible to act upon them peacefully. 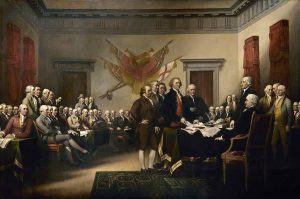 Kids are taught – or were – that the American colonies rightfully separated from Britain because they were not represented. Because they were justly tired of being under the political thumb of people unlike themselves, who lived far away and either knew nothing of their concerns or didn’t care about them. No one questions the legitimacy of the colonists’ argument nor the propriety of their actions.

They tried redress. They begged for representation. All they got was the royal boot.

And so they redrew political and geographic lines in such a way as to be represented and to consent to their government.

Are things any different in our time?

In states like Virginia and California and Oregon? Is it not a fact that the people of most of these aren’t represented?

That the geographic majority live under the boot of the cities and politicians of those cities, who not only rule them like royal governors but mulct them to finance their pleasure?

It is all too obvious – which is why it is so very dangerous. When elections no longer matter, as they no longer do, people will eventually take matters into their own hands.

The time has come to discuss going our separate ways before it gets to that.

We can still be Americans. If Americans’ right to govern themselves is respected. If it is not, we have two Americas – under one consolidated boot.

And then it will come to blows.

Sexual Assault is a Crime … Except Sometimes