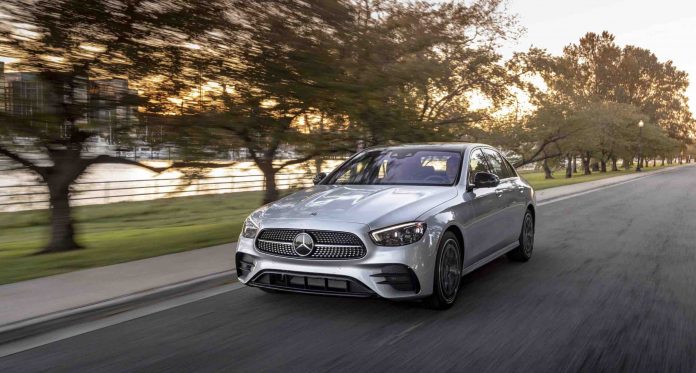 V6 engines are disappearing – even from luxury sedans like the Mercedes E-Class – a type of car which used to come standard with one. It now comes standard with a four cylinder engine, a very small engine given the size – and prestige – of the E.

It’s been made stronger via turbocharging – something practically every company making luxury cars has resorted to as a way to maintain the power of a V6 without using as much gas as a V6 does. There is also pressure to produce less gas – carbon dioxide – in order to comply with government regulations pertaining to that and in anticipation of more such to some.

But there’s something about a six  . . . and Mercedes just brought it back.

And it uses no more gas than the standard four.

The E-Class sedan is Mercedes’ entrant in the mid-sized luxury sedan segment. Its most immediate rival is the BMW 5-Series sedan, which is about the same size, similarly priced and similarly equipped.

Prices start at $54,250 for the base trim E350, which is powered by a 2.0 liter turbocharged four cylinder engine driving the rear wheels.

Mercedes’ 4Matic all-wheel-drive system is available optionally, which brings the MSRP to $56,750.

The E450 comes with a turbocharged  3.0 liter in-line six, paired with a 48 volt electrical system and high-speed starter/generator that allows the gas engine to be continuously cycled off and on, in order to save gas – and reduce the amount of gasses produced. It is also designed to eliminate any noticeable transitions – which is very important for a luxury sedan with a $62,000 base price (which includes the 4-Matic AWD system). 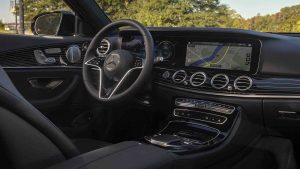 The price goes up only slightly.

Irrespective of what’s under the hood, the E sedan has a beautifully finished, open-feeling cabin surpassed only by an S-Class cabin – and that not by much.

The new six should never be cycled off.

Mouse pad controller is hard to use accurately while driving. 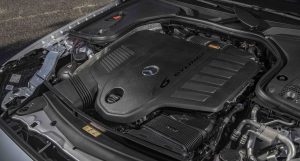 The E comes standard with a 2.0 liter four – which would have been considered an unusual engine to find under the hood of a $50,000 luxury sedan a decade ago. 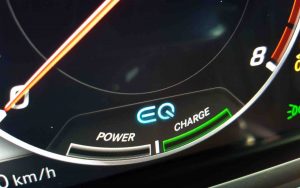 The gas mileage difference isn’t much, however.

The current E’s turbo four rates 22 city, 31 highway while the 2011 E’s 3.5 liter V6 rated 17 city, 25 highway – a picayune difference for a car in the E’s class. But Mercedes has to worry about gas emissions as much as gas mileage – as well as displacement fines for exceeding 2.0 liters of engine back in Europe.

This is why there is a small four as standard now rather than the previous V6. 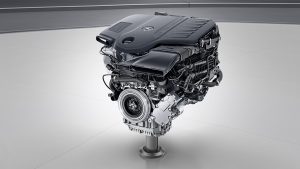 So equipped, an E sedan gets to 60 in about 6 seconds, which is about the same as the old V6 E.

The big news is the return of the straight six.

Mercedes was once famous for such powerplants, which propelled iconic models like the 300SL back in the 1950s and ’60s.

Straight sixes have the virtue of being almost as smooth as an electric motor while making  sounds no electric motor can make. This is because the in-line six layout is inherently balanced. No side-to-side vibrations. For that reason, it also doesn’t need a heavy external balancer to tamp down the vibrations. Which means the reciprocating assembly – crank, rods and pistons – are lighter and so rev freer.

It is the perfect powerplant for a sophisticated luxury sedan. 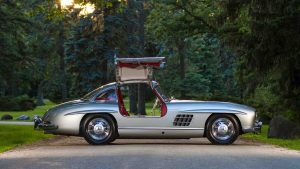 But a six – whether straight or in a “v” – uses and produces more gas than a four, which makes it hard to offer the additional cylinders, whether in line or arranged in a “v.”

Mercedes’ solution is to turn all of them off as often as feasible. And back on as necessary, without the obvious stop/start cycling that would render the inherent smoothness of the inline six as irrelevant as the great taste of food you can’t eat.

The EQ system can be described as a hybrid system and the intent is the same but the means toward that end are different.

Most hybrids have an electric motor – which to one degree or another can propel the car. The Benz has an integrated starter/generator sandwiched in-between the engine and the nine-speed automatic transmission

When the engine is running, it is spinning the flywheel-mounted generator, creating a great deal more electricity (48 volts) than a much smaller alternator being spun by an accessory drive belt.

When the engine’s power isn’t needed – as during coasting/deceleration – the system turns the engine off. 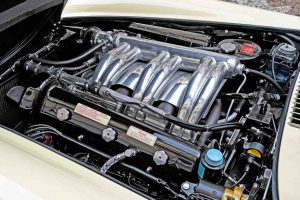 When the engine’s power is needed again – for acceleration – it is spun back to life  by the flywheel starter, which is much more powerful by dint of leverage as well as electricity than a standard starter motor bolted to the flywheel and that is what allows for the virtually instantaneous – and seamless – re-starts.

There’s also a slight power boost relative to last year. The output of the EQ-boosted straight six is exactly the same 362 horsepower and 369  ft.-lbs. of torque as that produced by the old V6 – by itself. But the new drivetrain’s peak torque is made slightly sooner, at 1,600vs. 1,800 RPM. 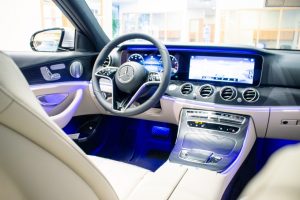 There’s another slight difference as well.

But it’s difference you can’t see that makes the six possible.

By cycling it off as often as possible, it is possible to keep the quantity of gas the six produces low enough to not cause problems with the geheimstatspolizei – i.e., the government.

It is why other car companies are resorting to the same technological work-arounds (as for example Jaguar, which uses a similar system in the new F-Pace).

There aren’t – yet – “greenhouse gas” emissions regulations in the U.S. But they are coming and Mercedes and the rest are being proactive.

And the upside is they’re able to sell engines like this new six. 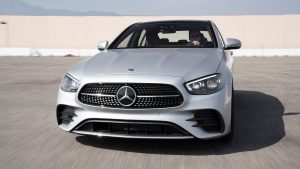 Mercedes touts the seamless transitions and the quiet of the EQ-boosted drivetrain, but it’s the sound of the six that sells this thing. The shame is that so much work was put toward making it silent.

Underneath that ugly plastic engine cover – an affront right up there with putting swim trunks on Michelangelo’s statue of David – lies one of the most beautiful engines ever put into a car. Instead of showing it off, Mercedes chose to make it look like every other engine by burying it under a shroud that looks the same as the ones covering up ordinary engines.

But is a special engine. It deserves better. One does not put ketchup on wagyu. 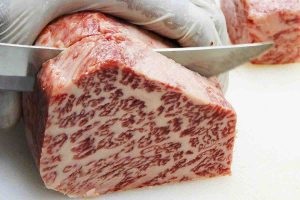 Inline sixes are uncommon, first of all, because their length limits where they can be put. Generally, small cars are out – there’s just not enough room. And front-drive cars are out, too – for the same reason.

But the thing which defines them is their song. Which you’ll hear when you give the  E enough pedal to overcome the silent-drive EQ system and the acoustic muffling, including that god-awful plastic cover.

Select Sport+ mode using the little toggle to the left of the mouse trackpad on the center console. The flatscreen gauges go red backlit but it’s not the visuals that excite or even the speed which ensues.

It is that sound. 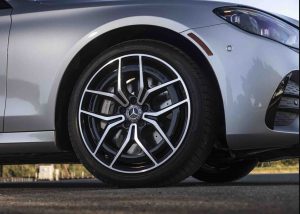 Nothing else makes it. And that – absent any noticeable vibrations – is what makes a straight six something special, to be savored – like a wagyu steak vs. an ordinary ribeye. Both are good.

But one is a rare treat, for the person lucky enough to be able to afford it.

There is something else that makes the E450 special – to be savored.

The seats, the surfaces – the ride. This is not a car for the corners. It is a car for the hours – whether in traffic or headed cross-country.

The feel, including the available massaging seats. Which will make you feel special, which is ultimately the point of spending $60k-plus on any car. 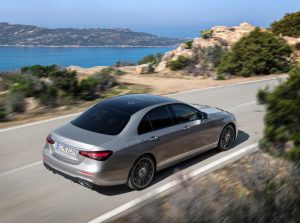 Mercedes put a lot of work toward creating this ensemble, which includes the visual – of the world outside the car, which you can see and which you feel a part of because of all the glass. Many new cars make you feel as though you are driving a bathtub; the doors are high – the glass almost like slits. This is done in part as a cheap-out way to score well in side-impact crash testing.

Driving the E is relaxing as well as inspiring. It has the legs of a Kenyan marathon runner, the lungs of Pavarotti – and the softness of your favorite sofa on a warm summer’s day.

In a word it is, special. 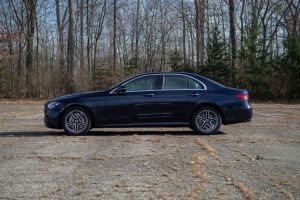 Because there aren’t many like it – under the hood or otherwise.

The E-Class, which is Mercedes’ mid-priced, mid-sized luxury sedan, now comes with or offers essentially the same amenities that used to be exclusive to the S-Class, Mercedes’ top-of-the-line (and full-sized) sedan.

These include an entirely flatscreen panel, not just for the main gauges but also the secondary – Infotainment – displays. The functional advantage to this layout is that more can be displayed because you can toggle various displays.

Physical gauges limit what can be displayed. It also looks razzle-dazzle, though there is a pratfall there – because flat-screen displays are not inherently expensive to put into a car and that is why they are now commonplace in common cars.

Which takes away some from the razzle-dazzle.

But common cars do not – and cannot – offer the creamy-soft leather and other such that cannot be made inexpensive and which abound inside the E. 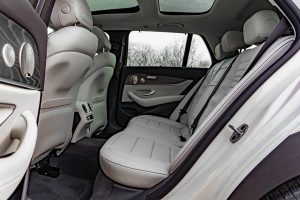 You will also notice other points of departure, such as the beautiful paint under the hood. In common cars – and some luxury cars – the paint in such areas is dull, because it wasn’t clearcoated. In order to save a few bucks per car.

But it makes the car look cheap – and makes you feel gypped if you paid $60k-plus for it.

The one thing you don’t get for your $60k-plus is the rearseat legroom and trunk size of the S-Class. Instead of the S-Class’s limousine-like 43 inches of legroom for the back seat occupants, there’s 36.2 inches – and the E’s trunk is smaller.

You don’t have to buy the six to get everything else Mercedes offers in this class – including the massaging (and bolstering seats) or the heated arm-rests and center pad, the superb Burmester audio system, the adaptive suspension, panorama sunroof, surround view camera or the plethora of luxury/convenience and driver-assistance tech that’s there for the opting. 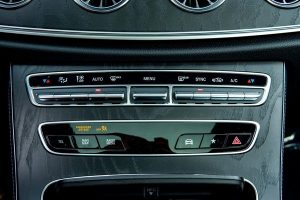 A nice feature that end-runs the mouse trackpad input on the center console is the voice-command system. You can change radio station, make a call and get the car to obey a plethora of commands without having to touch anything. This greatly reduces both annoyance and distraction.

Mercedes also thoughtfully includes redundant mechanical inputs for important functions, such as the volume for the sound system, which can be rolled up or down using a very happily tactile thumbwheel on the center console.

There are similarly tactile switches on the center stack to up-and-down the heat/cooling, fan speed and so on. 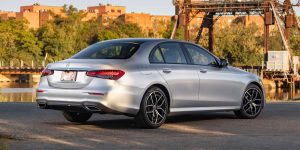 Mercedes has figured out a way to let you have the cake the government didn’t want you to eat – without charging you an outrageous sum to get it, either.