I’ve been test driving new cars long enough that the first new cars I test drove are now Antique cars, literally. I recently found myself behind a ’95 Mustang GT and was astonished to see the black and white “Antique” tag it wore – which reminded me that I am, too.

When I began writing about cars back in the mid-1990s, there were at least six brands that no longer exist, today. I thought it might be fun to reminisce about some of these Gone Ones. 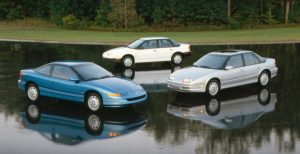 This was GM’s second attempt to resuscitate its small-car image, after Geo (about which more later). It was marketed as a “different kind of car company” and was in that it served its cars price fixe – i.e., you didn’t haggle; you paid what the sticker said, with the idea being to make the buying process less harrowing for people who didn’t like to haggle. Of course, no-haggle meant you paid what the sticker said – which meant you couldn’t haggle the price down.

The cars were different, too – at least initially. They featured flexible plastic exterior body panels that covered up the underlying structure of the car. This largely eliminated the door dings that every new car owner dreads and also reduced repair costs as the plastic panels were easy to remove and replace with new ones if they were damaged. They were also something else unusual – for an American car:

The curb weight of the first Saturns, the SL series, was only about 2,300 lbs.  They also sat low to the ground and came standard with five speed manual transmissions. They came close to 40 MPG on the highway without CVTs, turbos, stop/start “technology” and were fun to Frogger through traffic in.

GM eventually badge-engineered the brand into duplicative irrelevance. Saturns were resold as Pontiacs (another Goner) and Chevys and lost their composite exterior panels, became heavier and bigger and soon the only thing that was meaningfully different about a Saturn was not being able to haggle over the price.

This was Ford’s Oldsmobile, with some Pontiac seasoning. Meaning, a Mercury was a cut above your basic Ford in terms of trim and amenities but not lacking in the performance department, which it sometimes offered more of. 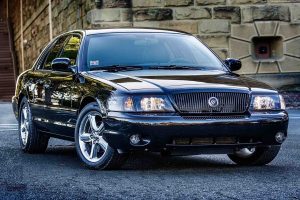 One of the last of these that I got to drive as a brand-new press car was the resurrected 2003-2004 Marauder, which was a hopped-up version of the Ford Crown Vic, which Ford sold fleets of to cop shops all around the country in the ’90s and early 2000s. But not even the Police Interceptor versions of the Vic had what the Marauder had – which was a 302 horsepower version of Ford’s 4.6 liter DOHC V8 paired up with a tire-chirping four speed automatic feeding an aluminum driveshaft spinning 3.55 rear gears. In black (other colors were available but black fit) this thing made you feel like a Fed, without the ugly connotations associated with that office today.

It was the last rear-drive, V8-powered Mercury and – as it turned out – one of the last Mercs, period. By the time the brand died, it wasn’t selling much anyhow. But at least it went out in style and will be remembered for that. 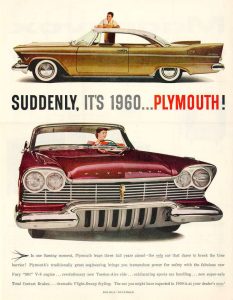 This was the budget brand of the Mopar conglomerate and – in its heyday (and before my day) sold lower-cost versions of high-performance Dodge and Chrysler models, like the GTX (1966-1971) which was basically a repackaged Charger. There were also glorious nine-passenger wagons like the Fury, which survived into the mid-’70s and some of which came with the mighty 440 V8, too.

By the time I was eligible for press cars, all that remained of Plymouth was the Execrable Neon and its derivatives, including the Chrysler-badged PT Cruiser. Both sold in legions but ended up much like the legions of Publius Varus in the Teutoburg forest in AD 9. They were many – and then there were none. This being the result not of treachery by Arminius but shoddy workmanship, by Plymouth. But I have one fun memory of the brand, which involved another brand. 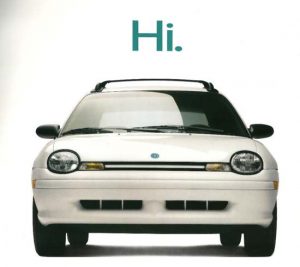 I was driving a press car PT Cruiser home one day. I came upon some traffic and left-righted through the blockage and proceeded on my way. In my rearview, I caught sight of a Mercedes E-Class that had been riding my ass and was trying to follow my line but unable to – its driver annoyed by this. As the gap opened up, I glanced in the rearview and saw the Benz pass the blockade on the shoulder. And began to close the gap. He had the speed advantage and was soon on my ass again. I was in the right lane now – and the left was clear – so why he didn’t just pass is something I’ll never know but probably due to some ape-like dominance ritual. Anyhow, I was close to home and the turn off – a deceptively languid sweeper that tightens up suddenly in the middle – was just ahead.

I increased my speed to as Ludicrous as a PT Cruiser was capable of and entered the turn, which I knew like my own smell since I practiced on it practically every day. The Benz driver did not have that advantage. I kept on the gas – and off the brakes. As the turn tightened up, the Benz driver hit his, over-corrected and understeered himself right into the guardrail. Later, I returned to the scene and picked up a piece of body-cladding remains (which Benzes of this era had) and mounted it on my garage wall. 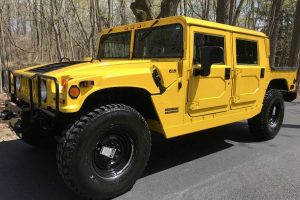 The PT Cruiser and Plymouth are gone. But I still have “war booty” on my garage wall.

The war-boner that engorged the nation’s pants back in the early 2000s led to GM buying the rights to produce a civilian-ized version of the AM General HUMVEE, which featured prominently in broadcast coverage of the then-new Warnn Terrr. It was a hugely capable, preposterous vehicle almost impossible to get into and akward to maneuver anywhere except the deserts of Iraq. But it was also a thumb-in-the-eye to the then-still backwater cult of Climate Change, which was then marketed as “global warming” and the H1 contributed mightily to it – if you believed in it – which enraged those who did believe in it.

Until the Orange Man, nothing annoyed a liberal as much as a Hummer.

In ’02 GM sent me an H1 Alpha – the most obnoxious of all Hummers – in a most obnoxious fly yellow. I gathered up my friends and we headed for the dirt baths not far from Dulles Airport, one of the few remaining open places in Loudoun County, Virginia. After covering the Hummer in mud like a pig in a waller, I used my finger to write, “I (heart symbol) Global Warming” on the rear and sides. We then rode around rolling coal in the thing (it was diesel powered) whenever in the vicinity of a Prius. 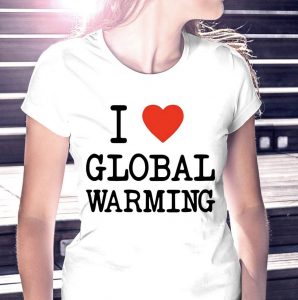 Back in those days, GM approved – sotto voce – such shenanigans. This being the pre-Barra GM, which was run by guys who liked cars (and monster trucks) as opposed to a woman who loves to signal her virtue.

Hummer, of course, took a dirt bath not long thereafter – along with most of the rest of GM, the remainder hooked to a government IV bottle and – no surprises – the quasi-corpse no longer interested in selling much of interest at all.

GM will probably not let me anywhere near the new – electric Hummer – which is fine by me, because a monster truck without an engine is like a gorgeous woman without her working parts.

I’ll have more fun with my memories.