We live in promiscuous times – and not just sexually. People divulge – people expect others to divulge – the most personal information, as for example whether they have been “vaccinated.”

To random strangers. To people whose names they don’t even know.

An interesting aspect of this is – once again – the dissonance of this promiscuity.

Try to imagine (it is not difficult) the bellowing outrage that would erupt if a conservative demanded to know whether the person who wished to enter his store was homosexual. And – if so – whether he was wearing a condom.

After all, homosexuals are more likely to carry several dangerous communicable diseases and – to anticipate the objection – more likely to actually spread them than a person who isn’t sick at all can “spread” a sickness he hasn’t got.

Objectively, there is more of a “case” to be made for Pink Passports – and interrogating people as regards their sexual activities and preventative measures – but you’ll never hear it made because, of course, the Pandemic is political. Homosexuals are only a small percentage of the general population, after all. It does not serve the goal to focus on slices. What is wanted is the whole pie.

Thus, a regime based on the insane assertion that because anyone might get sick or could be sick,  everyone must be presumed “sick” – and “treated,” accordingly.

But only as regards this – politically approved – sickness.

Why can’t we demand to know about other people’s herpes status, for instance? Whether everyone who goes out in public has been “vaccinated” for that? Herpes is communicable, too. Don’t people have a right to know whether you could be “putting them at risk”?

By that standard, of course, they have the “right” to know everything.

Because anything could be putting them at risk. Are you potentially violent? How do we know? Perhaps people will shortly be expected to produce paperwork certifying that they have been psychologically inspected and deemed in control of themselves.

Are you taking any prescription drugs that might have side effects that could “put me at risk”? How about all those anti-depressant meds with psychoactive properties? Haven’t people who encounter you got a right to know?

Such are the fruits of a promiscuous society. People habituated to airing their private business publicly (anti-socially, as via Facebook and the rest) had better get used to the idea of being expected to air it.

Someone I know – who isn’t promiscuous about her business – faces weekly demands for information about her personal business, from people who have no rightful business to make such demands. They want to know whether she has been “vaccinated” yet.

Imagine it, or try to. 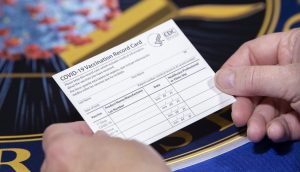 These people are not family or even friends. They aren’t employers, either – in the sense normally meant.

She does work for them – but does not work for them. They are not her boss; she is under no contract. They are just people who pay her to do some work for them, occasionally. And lately, some of these people have decided that her “vaccine status” is their right to know.

Will they also decide they have the right to know whether she is sleeping with anyone – and if so, is it  . . . “safe”? Has she taken precautions?

I have advised her to consider some table-turning, if they do not desist – which seems likely as the situational promiscuity of these people apparently knows no bounds. They want to know whether she is “vaccinated”? I suggest she respond by asking them whether they have been “vaccinated” – and not just for this putative sickness. For any and all potentially communicable diseases that could “put her at risk.”

Are they heterosexual? Have they ever had homosexual sex? Ever strayed? Have they been tested for all communicable diseases – and “vaccinated,” accordingly? Can I see the papers, please?

They would probably be outraged.

But they are outraged by any suggestion that other people’s equally private business isn’t their business. Their situational promiscuity demands that others oblige their disgusting personal inquiries and abide being expected to affirm – to prove – that they are “safe,” to the satisfaction of these cognitively dissonant, mentally deranged Freaks.

Of course, the mentally ill cannot see the derangement of their demands – because they are mentally ill. You’d have the same luck trying to teach a rooster French. All that can be done – until these people can be cured (or locked up in facilities for the incurable) is to “practice” avoidance.

Much the same as you’d avoid stepping on one of their filthy schnott-laden Face Rags, casually discarded on the pavement – by people so very “concerned” about unhealthy practices.