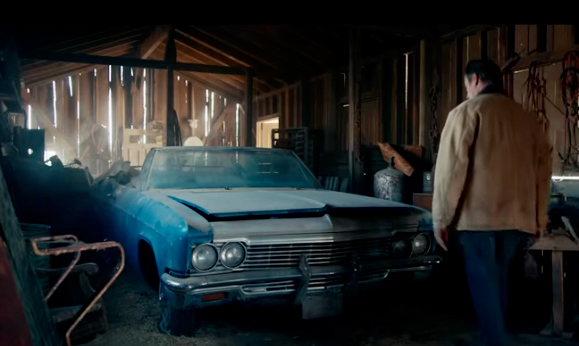 GM’s new commercial, Holiday Ride, makes you feel something. Which is telling, given the subject of the commercial is not a new GM vehicle.

About which it is hard to feel anything more than one feels for a new vacuum cleaner.

The scene stealer – and tear jerker – is the ’66 Impala SS 427 convertible that an old widower keeps in his barn, collecting dust and holding memories of his youth and his deceased wife. Flashback to scenes of them, both young – the car, new.

It was a long time ago.

The man’s daughter sneaks the derelict Impala out of the barn and has it restored to its former glory, down to the crossed flags/Turbo Jet 427 sticker on the chrome air cleaner.

Yes, they came with those, back then.

It made you feel things.

A brutal juxtaposition. An aching sense of what’s been lost.

Actually, what’s been taken away from us – by government – and by the homogenization-commodification of everything.

It is just shy of 2022 and is there a single new car in Chevy’s inventory that makes anyone feel anything like one feels looking at that ’66 SS convertible?

Or anything, at all? They’re all just cars now. Nothing to care about. Interchangeable throwaways, like pairs of socks from the same sweatshop in China sold at every store in America.

Is there anything that sounds like it does, when the old man turns the key – remember keys? – and the big block 427 fires to life? Does anyone’s heart beat faster to the appliance whirr of electrification – which is what GM is selling, today? 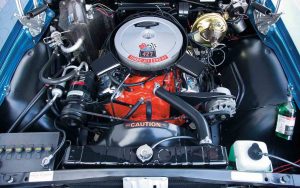 There are only two cars left in GM’s inventory today – if you don’t count the ’22 Malibu, which is going, soon.

Not that anyone noticed.

The rest of the lot being crossovers, pick-ups and SUVs, all headed for electrification. The majority of them propelled by androgynously interchangeable four cylinder engines paired with no-shifts-for-you automatic transmissions.

The exceptions are the Corvette and the Camaro and the word is the latter will be retired for the sake of electrification before 2025 and the former, while superior in every data point way to the ’66 SS – being much more powerful, far quicker and (of course) so much saaaaaaaaaafer – is nonetheless an alienating insectoid exotic with an exotic price, assuring very few who are young today will cherish memories of owning one, half a century from now.

It was different half a century ago.

In 1966, a brand-new Impala convertible stickered for $3,041 – which, adjusted for the theft of buying power that is innocuously styled “inflation” – amounts to $26,221 today. Which is why the man in the commercial – who appears to be in his 70s, today – could afford a brand-new convertible Impala back in 1966, when he was in his 20s. 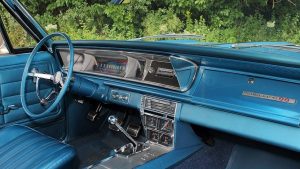 Today, $26k buys you an appliance. A crossover of some sort, like the 2022 Equinox – powered by a 1.5 liter engine making all of 170 horsepower. Which makes you feel like the way you feel when you walk the aisles of Wal Mart.

How many people in their 20s today can afford a $60,900 to start Corvette – or even a $31,500 new Camaro convertible? Both of which are also – price aside – as practical as swimming with a tuba. That ’66 Impala was a six seater two-door, which is to say both a performance car and a family car – exactly the kind of car a young man with a new wife might buy, knowing they’d likely soon have kids.

It was a type of car that was common back then and nonexistent today – because saaaaaaaaaaaaaaaafety. 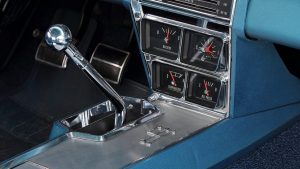 Or rather, because of the busybodies with guns so innocuously styled “the government.”

Once upon a time, government busied itself with protecting our right to buy cars like the one in Holiday Ride. But then it began to busy itself with micromanaging the kinds of cars it would allow us to buy.

Low-back/three-across bench seats were benched by the same regulatory apparat that “ruled” average Americans be priced out of the market for full-size cars with big V8s, like that old Impala, via fuel efficiency regulations that made them so expensive to buy via baked in/transferred costs – “gas guzzler” fines, imposed on the companies that built them – that only a few affluent people could afford to buy such cars.

And so, they went away. 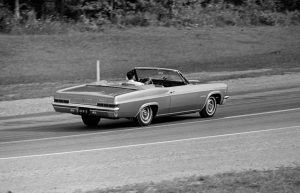 As did Turbo Jet 427s and four speeds, steering wheels without air bags and brakes without ABS.

Were they less “safe”? Certainly. But they made you feel something.

Not angry. Not depressed.

We loved our cars, once – because our cars weren’t appliances. They served a purpose, of course. But that was not their only purpose.

We see a glimpse of that world in Holiday Ride – and it does not make us happy about where we are.

It makes us nostalgic for where we were – and for what was.

The young don’t appreciate youth until they’re old – by which time it is too late to appreciate it. Similarly as regards the cars those of us who were there when they were new once took for granted, as if they’d be there forever. Like a warm summer afternoon, behind the wheel of your brand-new ’66 Impala SS convertible, sweetie by your side.

It’s enough to bring tears to your eyes.