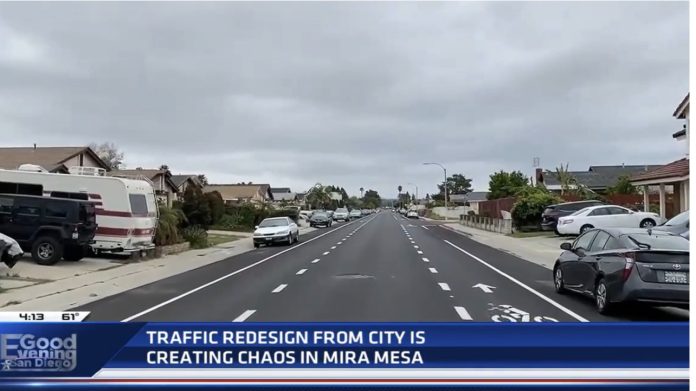 One of the ways cars – and driving – are being attacked is via reducing roads. If there’s no place to drive, then you can’t drive.

The latest, most brazen manifestation  of this “road dieting,” as it is styled, can be seen in San Diego, where what had been two lanes – one in each direction – is now just one. For traffic going both directions. The lane formerly devoted to traffic coming (adjacent to traffic going) has been “repurposed” into more lanes for . . . bicycles.

Which now have lanes going either way.

This was done by fiat – by the way. No notice, no public hearings. The public simply woke one day to discover that what had been two lanes – for cars – had been reduced to one. As part of what is styled an “experiment” with “Climate Change Initiatives.”

Meanwhile, cars coming and going on this road – singular – now face each other, head-on. It’s funny, but not a joke. For the drivers or the bicyclists, who can expect to be swerved into by cars swerving to avoid each other.

This is the Climate Change Clown World we’re living in now. The cars coming are supposed to defer to the cars going – or the reverse – and – somehow – “safely” drive around each other.

Without, of course, hitting a bicycle in the process.

Which will, of course, inevitably become the justification for eliminating the remaining car lane altogether.

“This is not safe for anybody,” local resident Tommy Hough says, stating the obvious. Equally obvious is the intention behind this, which is to first make driving so enervating that a growing number of people choose to stop driving altogether. Then, to literally force the “clingers” off the roads, by making them for bicycle and foot traffic only.

This example is by no means an aberration. It is merely the latest. In practically every city and town in the country, lanes for cars are being winnowed from four to two and – soon – from two to one.

With none being the ultimate goal for those behind all of this. 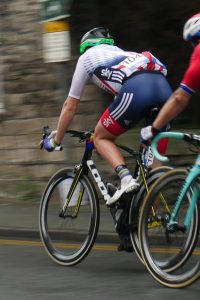 “Those” being a consortium of – as they often style themselves – “stakeholders” – encompassing urban technocrats who want to replace the private car with the public bus, rent-seeking private corporations who use the “public sector” to make lots of private profit and – of course – the small but belligerently vocal cohort of Militant Spandexers who have always hated cars and are determined to make the roads theirs.

Within cities, new buildings are being erected without parking lots. You cannot drive to these buildings and – even if you could – there would be no place to leave your car. In cities where it’s still possible to drive, the parking spots have also been put on a diet of sorts. A time diet. The meters – which in many cases no longer accept cash – limit how long you can park to 15-30 minutes, so as to nudge you to leave, sooner. The parking lots that let you leave your car all day charge so much many people can’t afford to park there.

The message is clear: Cars not wanted here. 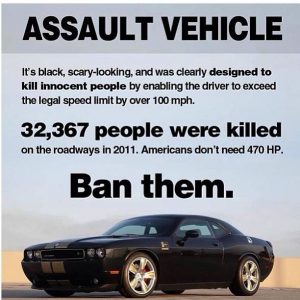 Which is interesting – telling – given the simultaneous pushing of electric cars, which make the most sense (if they make any sense) for people who live in – and drive in – cities.

On the one hand, enormous sums of taxpayer money are being spent to build the “infrastructure” that EVs have to have in order to be more than intermittently useful as practical transportation. No place to plug in means it’s no place to go. So the money is being spent to build places to plug in, mostly in cities and their peripheries. But the cities are being rebuilt to make getting a car – including an electric car – into the city ever-more-difficult if not outright impossible.

Incentives – and disincentives – both of them artificial and operating at cross-purposes. Unless, of course, the purpose is to turn driving and owning a private car, including electric ones, more or less what owning and flying a private airplane already is.

That being something that’s too much hassle – and too expensive – for all but a handful of people.

Bet you can guess who those people are, too.