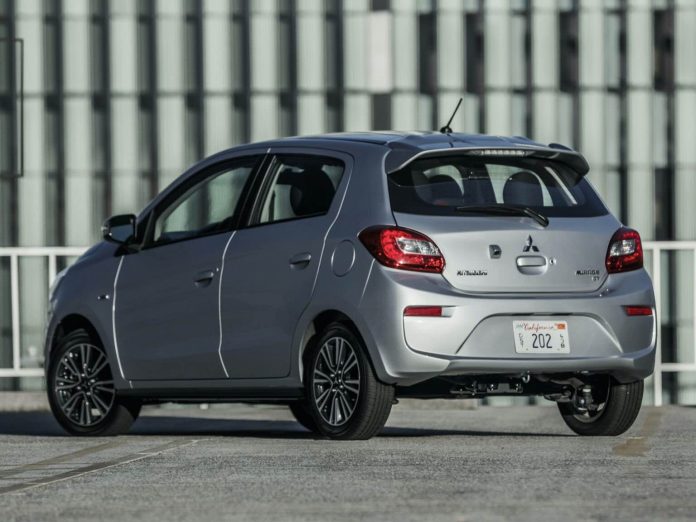 Pete Buttigieg advises Americans sweating the cost of $4 gas to spend $40,000 (or more) on an electric car.

Mitsubishi has a better option.

It’s called the Mirage – and the good news is, it isn’t one. 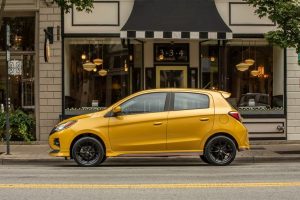 The Mirage is subcompact five-door hatchback, which doesn’t make it unique. What does make it unique is that it’s the only brand-new car you can still buy for less than $15,000 – without even haggling about it.

Base price is $14,695 for the ES trim – which comes standard with a manual transmission and an EPA fuel economy rating of 33 city/41 highway. You also get climate control AC, keyless entry and cruise control.

A top-of-the-line SE trim comes with heated seats, rain sensing wipers, leather trim and a $17,895 price tag. It also comes with am even higher EPA fuel efficiency rating – 36 city/43 highway (courtesy of the more efficient CVT automatic transmission that comes standard with this one). 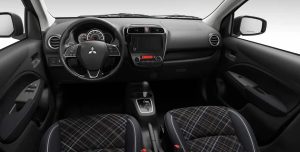 Both of these are sedans, by the way – and so only have about a third the available space for cargo.

One of the few other hatches in the class – the Kia Rio – stickers for $17,190 to start and comes only with a CVT automatic. There is also the Chevy Spark – if you hurry. GM has discontinued this model, so the few that are still available are all that ever will be available. Which is a shame, because the Chevy cost less than the Mitsu – $13,600 to start – and is almost as fuel-efficient (29 city/38 highway). 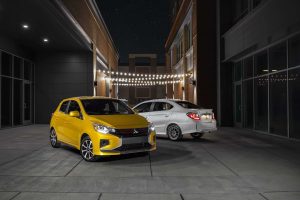 PS: If you prefer a sedan, Mitsu also offers the Mirage that way, too.

Mitsubishi has added a Black Edition to the roster. This one gets black-finished wheels and side mirrors, with red grill accents and matching interior trim.

Spend less on the car, have more money for gas.

Practical hatchback layout provides much more room for cargo than sedans like the Accent and Versa have.

That $14k price isn’t there as a lure to up-sell you into a more expensive trim that has the features that the low-priced-advertised model doesn’t.

Manual transmission is only available with the base ES trim; all other trims come standard with a CVT automatic. 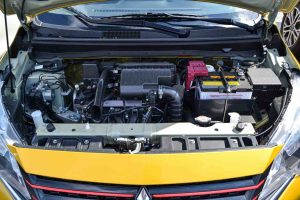 All trims come standard with the same 1.2 liter three cylinder engine, which generates 78 horsepower at 6,000 RPM. This makes it the least powerful engine you can get in a new car – but it also comes in one of the lightest new cars you can get.

The Mirage weighs 2,040 pounds. Which is why this little engine – which is smaller than some motorcycle engines – has enough power to get the Mitsu to 60 in about 10.6 seconds. This is not a speedy time; but it’s not the slowest time, either.

The Mirage is quicker to 60 than a Prius hybrid, for instance. And the standard five speed manual makes it feel quicker than it is (more on that follows, below). 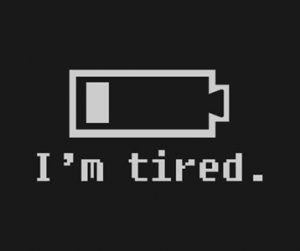 But the main reason people want this car is because it’s easy on gas. It also goes remarkably far on very little gas, an attribute that’s very relevant given how hard electric cars – which don’t go nearly as far – are being pushed.

The Mirage carries 9.2 gallons of gas, fully tanked up. This is enough to take you 377 highway miles and 303 in the city. For reference, EVs like the Nissan Leaf that cost almost twice as much only go about half as far and even the much-touted Tesla Model 3 only goes 272 miles on a charge – unless you spend almost four times as much as a Mirage costs for the “long range” (358 miles) version of that one.

A five speed manual transmission is standard in the ES trim, with the option to swap that out for a continuously variable (CVT) automatic. Equipped with the CVT, the little Mirage delivers the biggest MPG numbers of any new car you can buy that isn’t a hybrid – 36 city, 43 highway. 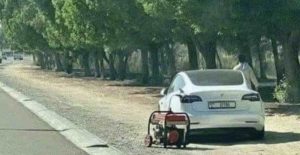 The Mitsu’s city MPG number is as good as – and on some cases, better than – the highway figures posted by a number of “economy” cars. Its highway number is unsurpassed by anything else that costs as little, which saves you twice.

To put a number on that, consider the savings vs. the Kia Rio – the only other hatchback in the same class now that the Spark has been put out, so to speak. You spend about $2,000 less for the Mitsu – which means you’ve got $2,000 left to buy gas with. That buys about 500 gallons of gas at $4 per gallon. Which amounts to about 55 fill-ups (9.2 gallons each) that will take you in effect didn’t have to pay extra for – by buying the Mitsu rather than the Kia.

Something else to consider in terms of the value proposition here is the absence of a turbocharger. The Mitsu’s engine is very small but it is also relatively simple and could probably be economically replaced, should that ever become necessary. This could prove to be very important in economically depressed times – which could last for a long time. 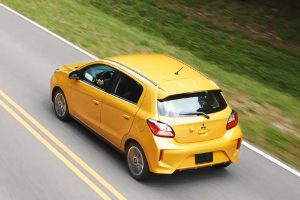 The Mirage isn’t slow. It’s just not fast. The difference is important.

Slow is an overloaded RV that can’t get up to speed, ever. A  school bus with a governor that prevents it from going faster than 60, even on the highway. It is not 10-something seconds to get to 60. That is merely not very quick.

Sufficient to get up to speed – with enough speed in reserve to maintain 75 on the highway. Perhaps not more than enough – but that would be beside the point, wouldn’t it? The point of the thing being to use the least gas for the least money possible. 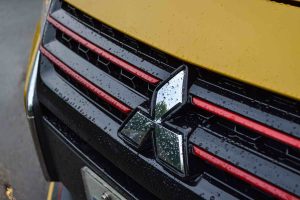 This the Mitsu excels at.

Per above, it also feels quicker than it is because it is so small – and so light. How Mitsu managed to keep the curb weight so low given all the government regs that have pushed the curb weight of other cars so high is something of a miracle as well as an admonishment to the rest. If Mitsu can build a just-over-2,000 pound car that complies with all the regs, why can’t the others? 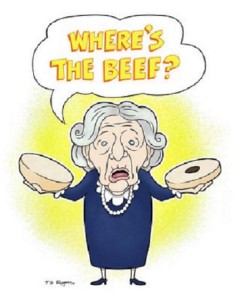 Right over there, pal.

But it isn’t here.

Even though the CVT-equipped versions are the most economical, the manual-equipped ES is the most fun. It also feels the speediest, if that’s the right word. Also – probably – the one least likely to hit you with any expense that might cost you gas money. Manuals rarely break; CVT automatics have a built-in tendency to. The belt/band that allows the CVT to continuously vary contracts and expands over time, fatiguing the metal it’s made of.

Eventually it’ll break and when that happens, you’ll need a new CVT.

You might one day need to put a new clutch in the manual-Mitsu. But that won’t cost you nearly as much gas money and in the meanwhile, you’ll be having a lot more fun. You can  make the most of what you’ve got with a clutch and a shifter in a way you can’t with a CVT – or any kind of automatic. You can rev the engine and slip the clutch, to launch in a way more favorable to acceleration. And – inside baseball – if you’re good with a stick you can match or even beat the CVT’s posted mileage numbers without paying extra for the CVT. 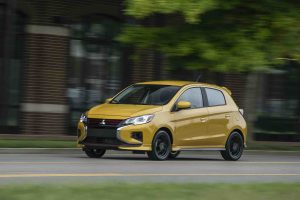 On the less fun side of the ledger, the Mitsu’s tiny engine is operating at more than two-thirds of its capabilities at 75 MPH, so there’s little hope of passing anything doing just a few MPH less than that unless you have plenty of time to let the speed build. But this is also fun – in a way that people old enough to remember the fun of driving an old VW Beetle on the highway will remember. Lots of great stories were made that way, back in the day.

Today, you can make your own stories-for-later in a Beetle-like car that has cold AC and a working heater.

A pretty good stereo, too.

Aside from its high mileage and low price, the other appealing attribute of this little hatchback is just that.

It isn’t a sedan, like the Versa and the Accent. This is important – if you like the idea of a small, highly efficient little car that doesn’t cost much but which you’d like to be more than just a commuter car, limited by how much stuff it can carry.

Sedans like the Accent and Versa seat four people, too. Theoretically, five – if you can stuff three in the back. But they each can only take a relative handful of their passengers’ things in their tiny trunks – 13.7 and 14.7 cubic feet, respectively. 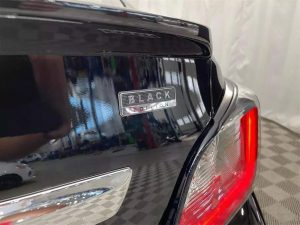 Well, relative to the comparatively huge 17.1 cubic foot cargo hold behind the Mitsu’s back seats, which can be increased to 47 cubic feet by lowering the rear seat backs. This endows this tiny car with practical capabilities far beyond those of same-sized sedans such as the Versa and Accent, which are incapable of carrying home the bulky things you can fit inside the Mirage.

Nissan used to offer the Versa in hatchback form, by the way – but no longer does. And Chevy just gave the exit-stage-left to the Spark, which was the only other car in the class that presented a real threat to the Mirage in terms of price, mileage – and capability, being a hatchback, too. 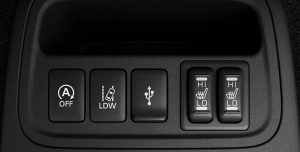 Mitsu could probably save some money – and lower the price even more – by nixing the other trims. The base ES trim has everything a person shopping for a low-cost, basic transpo unit would probably want – and more.

It is astonishing – if you’re old enough to remember cars like the Chevy Chevette or Ford Pinto, before it – to behold the lowest-priced new car available and behold that it comes standard with climate control AC, keyless entry, cruise control, a decent four speaker stereo and a seven-inch LCD screen, too.

Plus a full set of gauges.

Equally astonishing is the fact that you can add leather trim, heated seats, rain sensing wipers and proximity keyless entry (the car unlocks as you approach) and get all that for less than $18k without even trying to haggle it down. 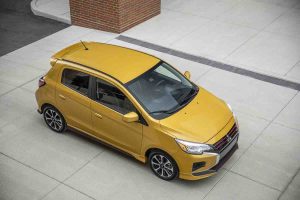 PS: If you don’t want items such as Lane Departure Warning, simply stick with the base ES trim – which doesn’t come standard with it.