Back in the ‘70s, every other car was a wagon. These were usually based on cars made more practical by turning them into wagons, which had much more room for cargo and in some instances, passengers.

But now everyone – just about – has a crossover.

And that’s why wagons like the Mercedes E450 are becoming fashionable, again.

Plus more ground clearance and some unique-to-this-model styling embellishments.

This is significantly higher than the asking price of the E-Sedan, which stickers for $54,950 to start. But then, the E450 comes with pretty much everything, to start with. And you can’t get the E-Sedan with 64 cubic feet of cargo-carrying capacity, no matter how much you spend on it. 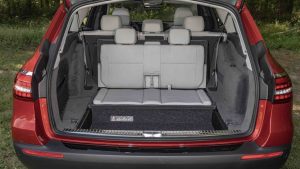 Or seats for seven.

The V8-powered AMG 63 version of the E is no longer available – a casualty of the war upon internal combustion.

Something different, for a change.

Massaging seats are almost worth the $68k, all by themselves.

Snow-day traction advantage of AWD is limited by not much ground clearance (5.8 inches).

Magnificent sound of the standard in-line six is overly muffled. 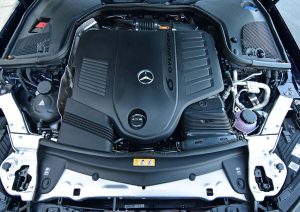 It makes 362 horsepower and 369 ft.-lbs, of torque, output comparable to that of a V8 but without the thirst of one. In fact, the six is hardly thirstier than the 2.0 liter (and 255 horsepower) turbocharged four that is standard in the E350 sedan. 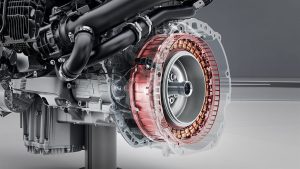 The point being, the usual fuel efficiency penalty you pay in exchange for having much more power at your command is heavily discounted here.

The trick is to cycle the six off as often as possible, in order to burn the least amount of gas feasible. But the problem there is doing the cycling in a seamless-to-the-driver manner.  The solution is a flywheel-mounted starter-generator system and a high-powered 48 volt electrical system. The flywheel starter provides the mechanical leverage to instantly spin (and so, re-start) the engine after it’s been cycled off – and the 48 volt electrical system  produces the power needed to make it work effortlessly.

The Benz system is more sophisticated than the belt-driven systems used by some others, including Audi. This engine has no belts at all, in fact. None of the accessories – power steering, water pump, AC compressor, etc. – are driven by a belt, so there will never be need to change a frayed one or deal with a squealing one. All the E-wagon’s accessories are driven electrically, which has the additional advantage of eliminating drag/power loss associated with having the engine power the accessories via mechanical means – i.e., the belt and pulley system.

It’s a very clever solution to a difficult problem of offering a powerful engine that isn’t too thirsty and which isn’t uncivilized in its manners, either.

A nine speed automatic with driver-selectable modes is standard. Also the previously mentioned 4-Matic all-wheel-drive system, which gives the wagon a traction advantage over its rear-drive (as it comes) sedan sibling. 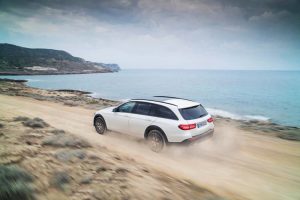 The Benz wagon sits pretty low to the ground and so only has 5.8 inches of clearance. This isn’t an off-roader.

However, it is considerably more ground clearance than the E-sedan’s 3.8 inches of clearance. It’s also slightly more clearance than the 5.5 inches you get with the Audi A6 AllRoad, which is the Mercedes’ primary rival. The Audi also has less engine – a 335 horsepower 3.0 liter V6, equipped with the belt-drive starter/generator system.

And it doesn’t have two other things that you’ll find within the Benz; more about that follows below.

There is something about a six. Especially when you’ve just paid $68k for it. Or for that matter, $50k – at which price point that used to be the least you got. Now it’s not – because of the engine-downsizing pressure every car company is under and not just on account of the pressure to meet federal gas mileage numbers. The larger the engine, the more gas (C02) emitted and that is why even $50k cars now come with fours and why $68k cars like this wagon have a six – that is often off. 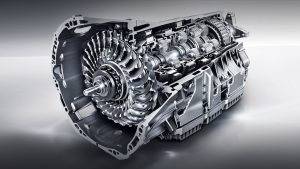 But you don’t feel it.

The flywheel starter/generator operates seamlessly. All you feel is the power of the inline six, when you ask for it. Despite being well over two tons(4,503 lbs., empty) it still gets to 60 in just over five seconds.

You can feel that in the small of you back.

And you don’t feel anything else – because the inline six is so smooth. That being a function of natural balance. The downward-upward strokes of six pistons lined up in a row directly above the crank do not trigger lateral oscillations that require heavy balancer weights to cancel them out. This also reduces the weight of the reciprocating assembly, so the six-in-a-row revs more eagerly. 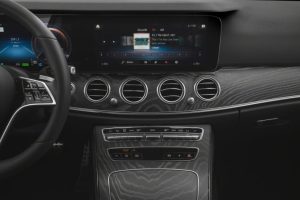 This is why the inline six is generally preferable to the V6 layout – assuming you have room in the engine compartment for the inline engine. There is plenty of room in this wagon’s engine room because this wagon is based on the rear-drive E-Class sedan, which was designed to have its engines facing forward and front-to-back. The Audi A6 Allroad is based on a front-drive layout and mounts its engines side-to-side.

It’s just a shame you can’t hear more from the inline six.

Mercedes put a lot of work into quieting the sounds of combustion, which is understandable in a luxury wagon. But this is an engine you might like to hear more from. Inline sixes sound good – and different. Not like a turbo four, which doesn’t sound bad, necessarily – but definitely not right in a $50k car and forget about in a $68k car. This, incidentally, is why several $50k-plus cars that have these fours also have sound augmenters, to make them sound like something else.

The sound of the six stands on its own – and makes you feel good about the $68k you just spent to hear it. Which you will, when you floor it. Then you’ll know there’s more than a four under the hood. 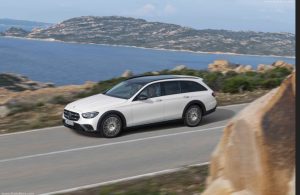 Ride and handling-wise, the E wagon also shows a differently interesting personality. It feels posher than the E sedan it is based on, probably because of the increased suspension travel.

At first, it feels a bit less sure of its footing when you arc into a curve posted 35 at 50. But hang with it and it will hang with you. The air-adaptive suspension that’s standard in the wagon will automatically roll with you. And over our increasingly potholed landscape, too. This is no small thing because the roads in many areas have gotten so bad that driving any car with a “sport” suspension and not much ability to roll with it can make you wish it did.

Having an extra couple of inches of clearance helps with that, too.

Some of the bigger potholes can also cause physical damage to cars that sit too low to the ground.

The wagon form is, by itself, an unexpected and so interesting sight, all by itself. The Benz stands out from the crowd and accommodates one, too.

In a way that’s really interesting.

Open the rear liftgate and then lift up on the handles that – you’d expect – would be attached to under-floor storage cubbies. How about an extra set of seats? How about rear-facing jumpseats? 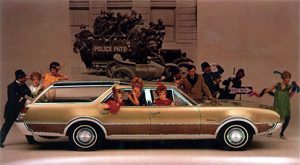 The E450 – uniquely – comes standard with what was once-upon-a-time common in family sedans. The thing which made them family sedans. That being the capability to carry a family. Today, finding seats for seven is hard to find – unless you go for a crossover, SUV or minivan, these being the only other vehicles that have them. But then, you’d be driving another crossover, SUV or minivan.

Mercedes gives you the option not to.

Sure, the seats are small and aren’t for adults – unless they are small. But they fit kids just fine and that’s the whole point. This is a wagon that can carry two adults up front, three teens in back and two pre-teens in the way-back. 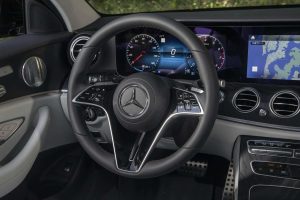 And with the jump seats folded back into the floor, the floorplan opens up to 35 cubic feet of cargo space – more than twice the trunk space (13.1 cubic feet) of the E350 sedan. Fold the second row down and that total capacity expands to 64 cubic feet – very competitive with mid-size crossovers that only seat five in two rows.

You can also get massaging seats for the driver and passenger. If you have yet to experience them, the only way to convey how attached you’ll get to them is to think about how used to heated seats most of us have become. Once you’ve had them, it’s hard not to. 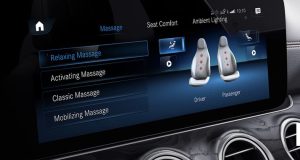 Same with the massagers.

The wagon also comes with unpainted/matte-black wheel arch protectors, which are there to help keep stone chips from scuffing the finish – plus a pair of low-profile roof racks, in case you need more ways to carry things.

Because it comes standard with most of what’s optional in the sedan, the wagon only offers a few extras. One of these is the Warmth and Comfort package, which adds “rapid heat” seat heaters, arm-rests and steering wheel. It’s only another $1,050 – and that probably only amounts to an extra $5 per month added to your monthly payment.

Mercedes does a top shelf job of blending tech with function. The E wagon has the expected LCD flat panel main and secondary clusters. But there is also a simple, functional thumb wheel to adjust the sound level of the superb Burmester audio rig and similarly at-a-glance (and touch) controls for every-drive-necessary adjustments, such as the temperature and fan speed.

There is also still a 12v power point – in addition to all the modern USB-type power points. This lets you power your old – and your new. 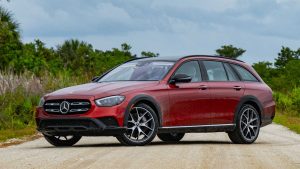 One thing this wagon doesn’t have in common with the Vista Cruisers of the past is a family friendly price tag.

In the Before Time, families could afford a 7-9 passenger wagon with a V8 engine. They were as common, once, as soft drinks with real sugar.

Of course, this is a Mercedes.

But it’s also because of the government that 7-9 passenger wagons with V8s are gone and wagons like this one  – with sixes – are rare.

And that’s a shame.

If you’d like to be driving something that not everyone else is driving – and have more room for everyone, too – here’s a wagon that could be what you’re looking for.