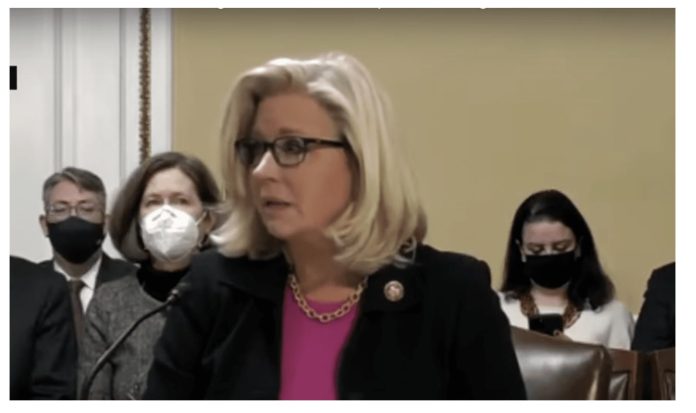 The Cheney Thing thinks it is the Lincoln Thing rebooted. It confirms everything those who voted against it suspected.

“The great and original champion of our party,” it said, “was defeated in elections for the Senate and the House before he won the most important election of all . . . Lincoln ultimately prevailed (italics added) . .  saved our Union and he defined our obligation as Americans for all of history  . . .  speaking at Gettysburg, of the great task remaining before us, Lincoln said that ‘we here highly resolve that these dead shall not have died in vain, that this nation, under God, shall have a new birth of freedom and that government of the people, by the people and for he people shall not perish from this Earth’ . . . as we meet here tonight that remains our greatest and most important task . . . ”

Lincoln enforced “the union” – at bayonet point. At the cost of half a million American dead.  Ended forever the previous freedom Americans assumed they had a God-given right to – including the right to choose their own form of government, rather than have a form of government imposed upon them by force of arms.

The Gettysburg Address is perhaps the most effronterous piece of beautifully crafted, cognitively dissonant inversions of truth ever penned. The states of the Southern Confederacy sought precisely what Lincoln and his Republicans used military force – including scorched Earth tactics that specifically targeted civilians for rape and pillage – to deny  them; i.e., self-government. 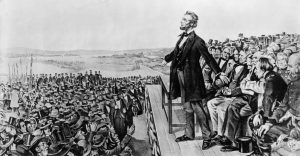 Cheney is indeed the natural inheritor of this tradition. She cannot abide the idea of the people having chosen Donald Trump. Worse, that they might choose him again. That they did not choose her – the daughter of the man who helped to set many precedents for the kind of government Americans now suffer under. A government that uses force to intimidate those who question its actions. That characterizes questioners as dangerous – the “enemies of freedom.”

This Thing licks its chops at the thought that Lincoln – the murderer of the American republic –  “ultimately prevailed,” just as it hopes it may, one day. So as to “define our obligations as Americans” – a phrase nowhere to be found or implied in either the Constitution or the Articles of Confederation that preceded it. The generation that fought for the right to self-government – a government “of the people, by the people” – did not consider that they owed any “obligation” in the collective, government-worshipping sense meant by this Thing. Rather, they considered that government had an obligation to let them alone. To let them decide for themselves how to “pursue happiness,” in the far more felicitous phrasing of Thomas Jefferson – the great and original champion of freedom. 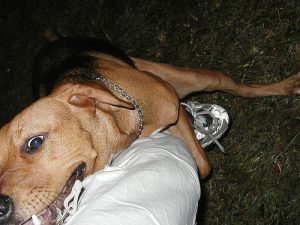 And – specifically – freedom from government.

The Thing is fundamentally opposed to that – as its self-referential leg-humping of the “great and original champion” of consolidated, coercive government unintentionally but devastatingly reveals.

But it is not merely this Thing that has revealed itself. A much more worrying thing is revealed by the reaction – of Republicans – to the Thing’s self-referential Lincoln leg-humping. They take umbrage at the soiling by association of the Thing with the “great and original champion” of their party, whom they leg-hump just as fervently.

Which tells us they understand nothing about the “freedom” they imagine themselves and their party to be the defenders of. Worse, that they do not give a damn about freedom, beyond being “free” to support their form of its opposite. That being the slightly tweaked variant of the consolidated and coercive apparatus of government embodied by the only alternative Americans are permitted, courtesy of Lincoln’s murder of the right to say no to both of them.

And – in the event that no is not respected – to depart from both of them. 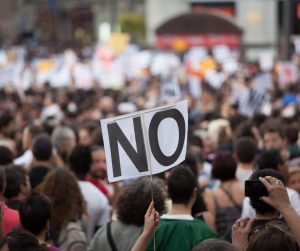 That secession being a synonym for the independence still paid lip-service to but which has lacked substance since the “great and original champion” of the GOP sent his locusts down South to do their dirty business.

For the sake of business, it must be added.

Lincoln’s nimbus derives from the idiot belief that he “freed the slaves.” And that he did – in the states where he had no power to do so (i.e., the Southern states that had departed from the Union). He did nothing about the slaves in the Union. The war was fought to enslave all – white and black – to the money power that controlled the Republican Party and bought and paid for Lincoln to be its standard-bearer. 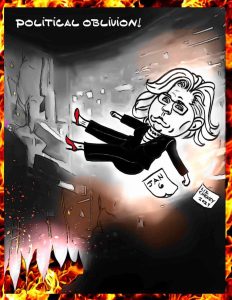 And he returned a handsome profit on that investment.

Getting rid of the Thing was a step in the right direction. But there will be no walk back toward freedom – real freedom – until there is a party that respects it and which will defend it.

This is probably why the Thing roils with hatred for Trump – who, for all his many flaws, has reawakened a spirit long dormant in a Union maintained by the force and dread of a consolidated government that shits all over the idea of government “of the people, by the people and for the people.”

The Things are scared now. Not so much of Trump. But rather of what Trump has awakened.