As it happens, I was sent another crossover SUV to evaluate this week. And as it happens, this one’s also different in a number of respects from the others like it – including the Toyota RAV4 I wrote about last week.

Including how it looks.

The Mazda CX-30 is also a little smaller than the RAV – as well as the Honda CR-V and Nissan Rogue. But only a little.

And it’s also a lot less expensive. It isn’t the one to take off-road; the RAV4 TRD is the one for that.

But it is the one that rules the road – because it offers the most powerful engine you can get in small crossover that isn’t a really small one, like the Hyundai Kona.

Which comes standard with a much less powerful engine. 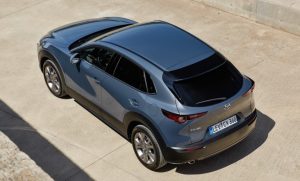 The CX-30 is Mazda’s compact-sized crossover, with two rows of seats, seating for five and available all-wheel-drive. But that is not what makes it different from other, slightly larger crossovers such as the Toyota RAV4 (reviewed here), Honda CR-V and Nissan Rogue.

The big difference is you can get  the CX-30 with a 250 horsepower turbocharged engine. Models like the RAV4, CR-V and Rogue don’t offer much more than 200 horsepower – if they offer that much.

Another, less tangible, thing that Mazda offers is different (dare it be said, sexy) styling –  though it comes at the cost of cargo capacity, of which it has less than more practicality-minded small crossovers like the CR-V, RAV4 and Rogue. 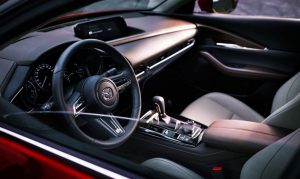 Which brings up another big difference between the Mazda and its slightly larger rivals.

That being its much lower cost. 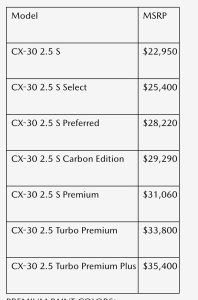 So why does the CX-30 cost so many thousands less than those others? It’s because the RAV4, CR-V and Rogue are all slightly larger. They are now verging on mid-sized, while the CX-30 is compact sized.

But the CX-30 is still close enough in size to be cross-shopped, especially if you prefer to not spending several thousand dollars more to get a little bit more size. And if you need something a little larger – that also offers a 250 horsepower turbocharged engine – there’s the Mazda CX-5.

Another possible cross-shop is the $21,990-to-start Hyundai Kona. But it is smaller than the CX-30 and it comes standard with a much less powerful (and smaller) engine. It ism however, available with the strongest engine in the class.

The standard (non-turbocharged) 2.5 liter engine gets a 5 horsepower bump (to 191) and a slight gas mileage bump. Second row side-impact air bags are also standard on all trims. 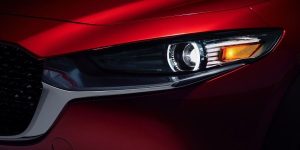 One of the most affordable small crossovers on the market.

One of the most stylish small crossovers on the market.

One of the most powerful small crossovers on the market.

It’s smaller than most other crossovers.

It’s got less room – for cargo – than slightly larger crossovers.

High-powered turbo engine only available in most expensive trims. 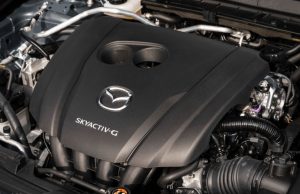 This little Mazda offers two engines. Or rather, two versions of one engine.

But it’s the little CX’s optional engine – or version of it – that really stands out. It’s the same size (2.5) liters and type (an inline four) but with a turbo boosting its output to 250 horsepower and 320 ft.-lbs. of torque – much more power (and torque) than you can get in slightly larger crossovers, like the RAV4, CR-V, Rogue and others. 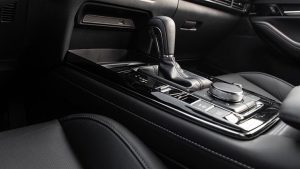 Accordingly, it can get to 60 in a very speedy 5.7 seconds – about two seconds quicker than the RAV4, CR-V and Rogue.

The standard 2.5 liter engine (without the turbo) also goes a little farther on a gallon than the slightly-less-powerful version (186 hp) of that engine in last year’s CX-30 went, which was 24 city, 31 highway. That’s a gain of about 2 MPG – and a gain of 5 horsepower, which isn’t a trade-off at all. 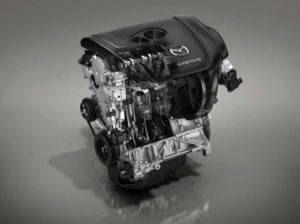 Another no-downside aspect of the Mazda vs. many of the others (though not the RAV) is that its standard automatic transmission isn’t a CVT (continuously variable) transmission. It’s a six speed automatic that shifts up and down rather varying through the ranges. The latter can be a slight fuel-efficiency advantage, in that the CVT is always in or very close to the right range and doesn’t have to shift up – or down – to get there. But it’s a small one (viz, the Honda CR-V, which does come with a CVT, is only slightly more fuel-efficient – 28 city, 34 highway) and a common trade-off is more drivetrain noise, because the CVT tends to keep the engine operating at higher RPM when you’re accelerating, especially if the engine hasn’t got a lot power to offer – whereas a geared automatic will shift up, lowering the RPM (and thus, the noise). 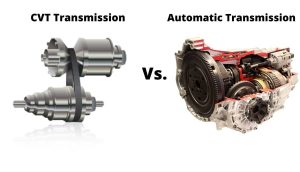 Also, CVTs are – as a general thing – not as long-term reliable as conventional (geared) automatics, chiefly because of the inevitable metal-fatiguing of the band/belt that expands/contracts to continuously vary the range you happen to be in as you’re driving.

The Mazda’s automatic comes close to matching the efficiency of a CVT – without being a CVT. It does so, chiefly, by having a really deep (0.599) sixth (overdrive) gear, which greatly reduces engine RPM during steady-state cruising.

Like other crossovers in the class – including the slightly larger ones, like the RAV4, CR-V and Rogue – the CX-30 is front-wheel-drive as it comes and is available with all-wheel-drive. The AWD system features standard torque-vectoring, which means power is metered side to side as well as front to back, so as to enhance both handling and traction.

Hyundai’s Kona isn’t rated to pull anything. And its standard 2.0 liter four only makes 147 horsepower. It’s also paired with a CVT. However, you can get the Kona with the strongest engine in the class – a 2.0 liter four boosted to 286 hp – paired with a dual-clutch automatic.

Crossovers are fundamentally about practicality. Otherwise why would you want to buy one?

The idea is to fit more into less – people as well as cargo – vs. a sedan of about the same size that you might otherwise want to buy.

Crossovers, which ride higher than sedans, are also better be able to get out of your driveway – and to work – when there’s snow. That’s why they ride higher off the ground – and are taller than sedans. And have liftgates in the back rather than a trunk. 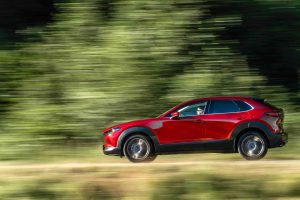 But that doesn’t mean they can’t also be fun, at least a little bit.

Mazda puts more effort in here than most. This isn’t surprising given Mazda also makes the Miata, which is arguably the best mass-market sports car ever made. Maybe even the best, period. This is relevant for the same reason that sons often take after fathers; blood tells.

Of course, the “blood” here is more like attitude, which is reflected in the general eagerness of Mazda vehicles in general to be as much like the Miata as they can be. Echoing the Miata, the CX’s suspension tuning invites pushing it a little. The steering feel has just the right weight to it. Everything syncopated and focused not on the getting-there so much as having a little fun getting there.

Most of all, this includes getting there fast.

The CX’s available turbocharged engine is stronger than the Miata’s and that evens things up a lot, even though the CX weighs a lot more than its lightweight, two-seater sibling. It blows the liftgates off the RAV4, CR-V and Rogue, at any rate. And – in spite of the Kona N’s significant horsepower advantage – the larger Mazda is only slightly less quick. The Kona N getting to 60 in 5.3 seconds (vs. 5.7 or the Mazda).

What both of these crossovers need – in terms of making them more fun – would be a manual transmission. But that’s been sidelined by the need to comply with various government edicts that are easier to comply with when you can program a transmission to shift in such as a way as to score best on the tests. You can’t do that with a manual – and that’s why it’s hard to find manuals in new cars.

That said, the Mazda’s six speed automatic doesn’t have too many gears (just six) and so it does not have to shift down – and back up – as often. And it doesn’t have the lurchy low-speed feel that you sometimes get with dual-clutch automatics, as in the Kona N. It is also just a little smaller than most of the really popular small (but slightly larger) crossovers like the RAV4, CR-V and Rogue. But not so much smaller that it doesn’t cross-shop well against them – especially if you don’t need a little bit larger. 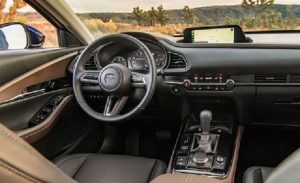 Especially in view of how much less it costs.

Front and rear seat legroom in the CX-30 (41.7 inches and 36.3 inches, respectively) is very close to that offered by slightly larger models like the RAV (41 inches and 37.8 inches, respectively) with the major substantive difference being cargo space. The Mazda has 20.2 cubic feet behind its second row and 45.2 cubic feet with the back seats folded; slightly larger – slightly longer – models like the RAV have 37.6 cubic feet behind the second row and 69.8 cubic feet in total with those seats folded.

You may of course need the extra cargo room. But what this little Mazda offers is a lot more room for cargo than even a full-size sedan – and about the same room for people as slightly larger but much pricier small crossovers like the RAV, et al. 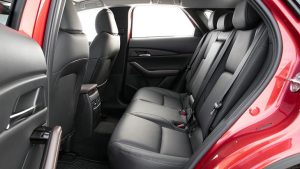 And it’s still a little bit larger than the very small Hyundai Kona, which is about the same size as the discontinued CX-3 but costs about the same while offering less than the CX-30 – especially as it comes, under the hood (just 147 horsepower, remember).

As far as looks:

This Mazda is a crossover but it tries hard to not remind you of that – by reminding you of the Miata. In the driver’s seat, it looks a lot like the Miata. The gauge cluster (analog-style tach and speedometer) is similar in layout and – if you forget about the back seats behind you – it’s not hard at all to let your mind wander and imagine yourself driving a Miata. 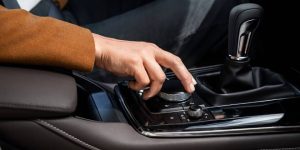 It’s not the same, of course. Obviously. But it’s just close enough to make driving a CX-30 because you need those back seats (and the extra room behind them) and for those reasons can’t drive a Miata right now a lot more pleasant.

Two small nits to pick with this small Mazda. 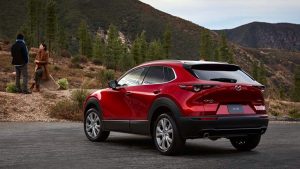 On the other hand, the Kona N’s powerhouse engine also requires premium to deliver its maximum horsepower – while the Mazda’s standard engine makes a lot more power (on regular) than the Kona’s standard engine.

The other thing is the CX-30’s input system for the secondary functions such as operating the stereo. It’s a two step process. First, select the function. Then adjust. It’s just a little more involved than a single process – such as a knob you can turn to change the station without first having to find the digital representation of a knob.

A little bit smaller can sometimes be just big enough.