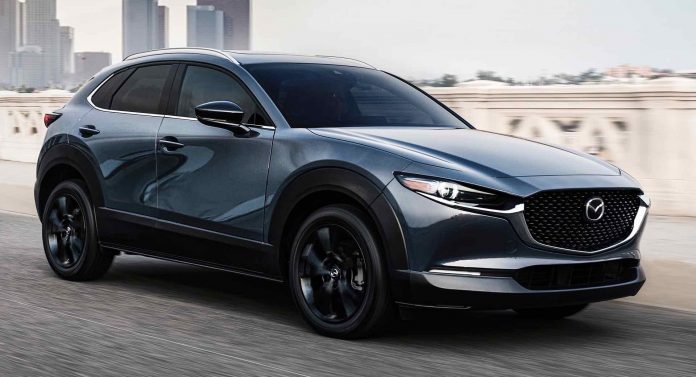 Sometimes, too close is not far enough.

The CX-30 came out last year as a new model – ostensibly slotting between the smallest CX-3 and the mid-sized CX-5. But the differences proved to be so small that people had trouble telling the difference between the two, even though there were some other differences – such as the CX-30 having a much stronger standard engine than the CX-3 as well as most of the subcompact-sized rivals of both of these little Mazdas.

In any event, Mazda has decided to make just one small crossover rather than two – so as to not compete against itself for the same buyers. 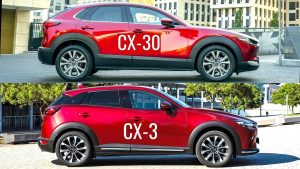 The CX-30 will be the smallest crossover Mazda sells after the 2022 model year – when the slightly smaller CX-3 will no longer be offered for sale.

It is similar in general layout to other small crossovers like the Subaru Crosstrek, Toyota CH-R, Honda HR-V and Hyundai Kona but differs from them in coming standard with an engine that’s more powerful than the available engines in all of those models. If they even offer a more powerful optional engine.

Several of them don’t.

And now it’s available with the strongest optional engine in the class.

Prices start at $22,050 for the base S trim equipped with a 186 horsepower, 2.5 liter four cylinder engine (without a turbo) and front-wheel-drive.

A top-of-the-line Turbo Premium Plus – with the same drivetrain plus a 12 speaker Bose audio system, Head-up Display (HUD), adaptive headlights that turn with the steering wheel and a whole roster of electronic “safety” equipment, including something called Traffic Jam Assist – lists for $34,050. 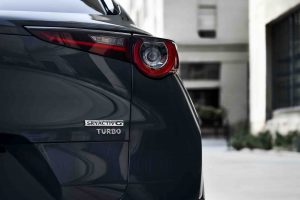 Mazda decided that offering the CX-30 with just the 186 hp engine – in a class where 140-150 horsepower engines are standard and the most you can get in something similarly priced is 182 horsepower (the Soobie Crosstrek’s optional engine) wasn’t enough to cement its status as the muscle car of the small crossover bunch.

So it has added a turbocharged version of the 2.5 liter engine to the roster.

Most small crossovers are small under the hood – even with their optional engines. The CX-30 isn’t, with either of its two available engines.

Though it’s a crossover – and so meant to be practical – it has more style than other crossovers in the class. 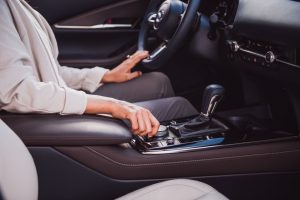 LCD display screen isn’t a touchscreen; MMI rotary knob input system is more awkward to use than systems in rivals.

Some of the “safety” and “assistance” tech is naggy and can’t be turned all the way off. Or opted out of.

The CX-30 comes standard with a 2.5 liter, 186 horsepower four cylinder engine that is larger and much stronger than the standard engines in rivals like the Crosstrek (2.0 liters, 152 hp) and C-HR (2.0 liters, 144 hp), HR-V (1.8 liters, 141 hp) and Kona (2.0 liters, 147 horsepower) and makes its power without a turbocharger – which adds both expense and complexity as well as pressure – applied to internal parts such as bearings, pistons and connecting rods. Turbos also add heat – which must be ameliorated by heavier-duty cooling (and oiling) systems. 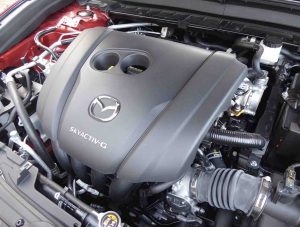 Pressure – and heat – can be compensated for by building an engine to be tougher and its peripheral systems – such as its cooling system – to be more capable of dissipating the heat. But there’s no getting around the increased number of parts and so the increased chances of one or several of them not holding up, eventually. It may not be an issue for you, if you don’t keep your car forever. But if you do, you may want to skip the turbo.

The CX-30 also has something else its rivals haven’t got: A conventional automatic transmission with six speeds rather than a continuously variable (CVT) automatic with ranges.

CVTS are all the rage – with the car companies – because they help the car companies squeeze another 2-3 MPGs out of the drivetrain. They do so by keeping the engine in the ideal spot in its power band at all road speeds – but the price the car buyer pays for that is a vague, almost “slippy” feel as the car accelerates. A geared automatic shifts up and down as the car accelerates, imparting a more positive feel as well as (usually) producing less drivetrain noise, because engine RPMs decrease with each upshift. A CVT will increase – and hold – engine RPM at a higher speed until the driver eases off the accelerator. 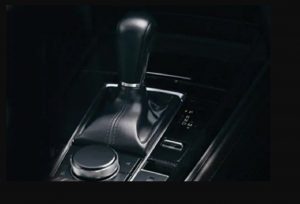 CVTs also have a much worse track record for durability than conventional automatics and can be very expensive to replace (CVTs are generally not rebuildable) when they fail.

You can go FWD or AWD with the CX-30’s much stronger standard engine; it is often the case with other crossovers – though not Hyundai’s Kona – that to get the optional stronger engine, you must also buy AWD – which is not a feature everyone necessarily needs or wants (more components, more potential down-the-road repairs). 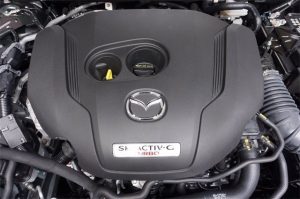 With all that power, it is no surprise that the CX-30 is the speediest crossover in its class, posting a 0-60 time of 5.8 seconds.

But the real news is how quick the not-turbocharged CX-30 is – especially relative to its much less powerful rivals, with their standard engines. The FWD version gets to 60 in the mid-sevens. The Soobie Crosstrek with its standard engine takes more than 9 seconds. 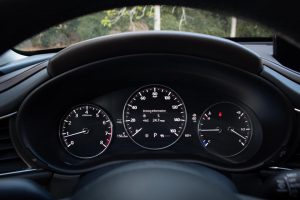 A final point of interest is that both of the CX-30’s engines – including the turbo-boosted engine – are designed to run on regular unleaded. Turbocharged engines often require premium unleaded to deliver the horsepower they advertise – and you pay a little extra for that at every fill-up.

Every crossover is practical. Few are fun. The CX-30 at least makes the effort. 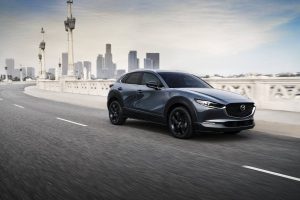 You can’t program a manual to shift up to the highest (overdrive) gear as soon as mechanically feasible – as you can an automatic. Most drivers will not select the next-highest gear until they can do so without belly-flopping the engine’s power – and so the car’s forward momentum.

But you can program an automatic to shift that way.

This gives a deceptive impression of the mileage the car so equipped is going to deliver in the real world because most drivers will respond to a too-soon programmed upshift into overdrive by pushing down harder on the gas (or selecting “sport” mode, which usually just kicks the automatic out of overdrive, making the drivetrain feel more responsive). 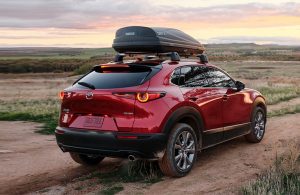 This results in lower-than-advertised gas mileage.

The unpublicized fact is that a driver who knows how – and when – to shift can outperform the programming of an automatic. But this is highly dependent upon the individual skill of the driver – as opposed to the programmer (who programs for one-size-fits-all).

The manual also has the built-in advantage of being mechanically (rather than hydraulically) connected to the engine, via the mechanically connected (to the flywheel) clutch. There is no “loss in transmission” of engine power (and so, efficiency loss) through a manual, as there is with an automatic – even modern automatics with lock-up torque converters, which do establish a mechanical connection between the engine and transmission . . . but only when the car is moving and usually only at steady-state cruise speeds.

Mazda doesn’t give you the option to shift for yourself but the CX-30’s six speed automatic does shift. Almost all of its rivals have CVT automatics that never shift. They have an oatmeal-soggy feel when you stand on the gas; the CX-30 feels snappy as its transmission shifts through each of its six gears. 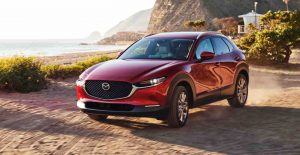 Also, it’s less necessary to stand on the gas when you have power to spare.

Even the standard engine has plenty. In rivals, you pay extra to get adequate.

Crossovers are utilitarian by design so it’s harder to design them to look un-alike. It’s why most do. The function dictates the form. How many ways can you design a screwdriver?

But – again – Mazda at least makes an effort.

The CX-30 shares some of its looks with the good-looking Mazda3 and Mazda6 sedans, which are defined by their comparatively long noses and elegant wave-motion sculpting.

What it doesn’t share with them is their comparative impracticality.

Like other crossovers – including its less good-looking rivals – the CX-30 offers literally three times as much space (and then some) as is at your disposal in a sedan of the same size or even a larger size, in terms of its physical footprint. 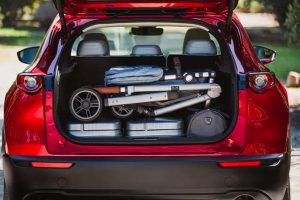 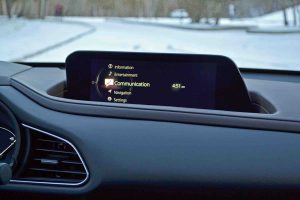 The CX-30 also looks good – on the inside – as is true of all Mazda models. It is attractively finished, with what looks and feels like real metal (brushed nickel) trim that gives it a cut-above feel. Especially in view of its just barely over $22k price to start. Which is less to start than under-engined rivals like the Crosstrek ($22,245) and only slightly more than under-engined rivals like the HR-V ($21,020) and C-HR ($21,595).

One of the few negative differences between the CX-30 and its rivals is its awkward-to-use rotary/push knob controller, which you have to use to make certain adjustments because the CX-30’s standard 8.8 inch display screen is not a touchscreen. To make adjustments, you must first rotate the knob to access the menu item you’d like to select, then push to select it and then rotate/push again to alter the setting. You almost have to look at it to work it.

It could use some work. 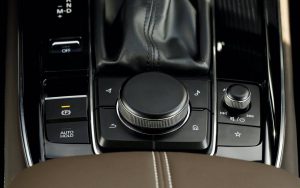 Also in the hair-in-the-soup department: The CX-30 has a lot of busybody electronics – “safety” and “assistance” tech. Especially the higher-trim/Turbo versions. Some of these “assists” can be dialed back – but not turned all the way off. And many of them – including Forward Collision Mitigation, Lane Keep Assist and a Drowsy Driver Monitor – cannot be opted out  of because they are standard equipment in every CX-30.

The same is true of automatic stop/start (ASS) which shuts off the engine at practically every red light and makes you push a button to shut the ASS off. But at least you can shut it off.

Finally, watch out for the power rear liftgate that comes with the Preferred and Premium trims; it won’t let you manually raise or lower the liftgate. It will actively fight you, if you try. So you have to stand and wait while it lifts itself – slowly – while beeping. 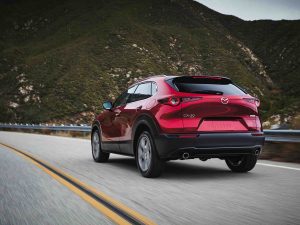 Some people  – those with limited mobility – may find this helpful and even necessary. But it can be very annoying if you’re not limited and just want to open and close the liftgate and get going without all that waiting.

It’s generally hard to tell much difference between Crossover A and Crossover B. But the Mazda CX-30 is different under the hood – and how it looks. That makes it easier to write about.

And an easier choice to make. 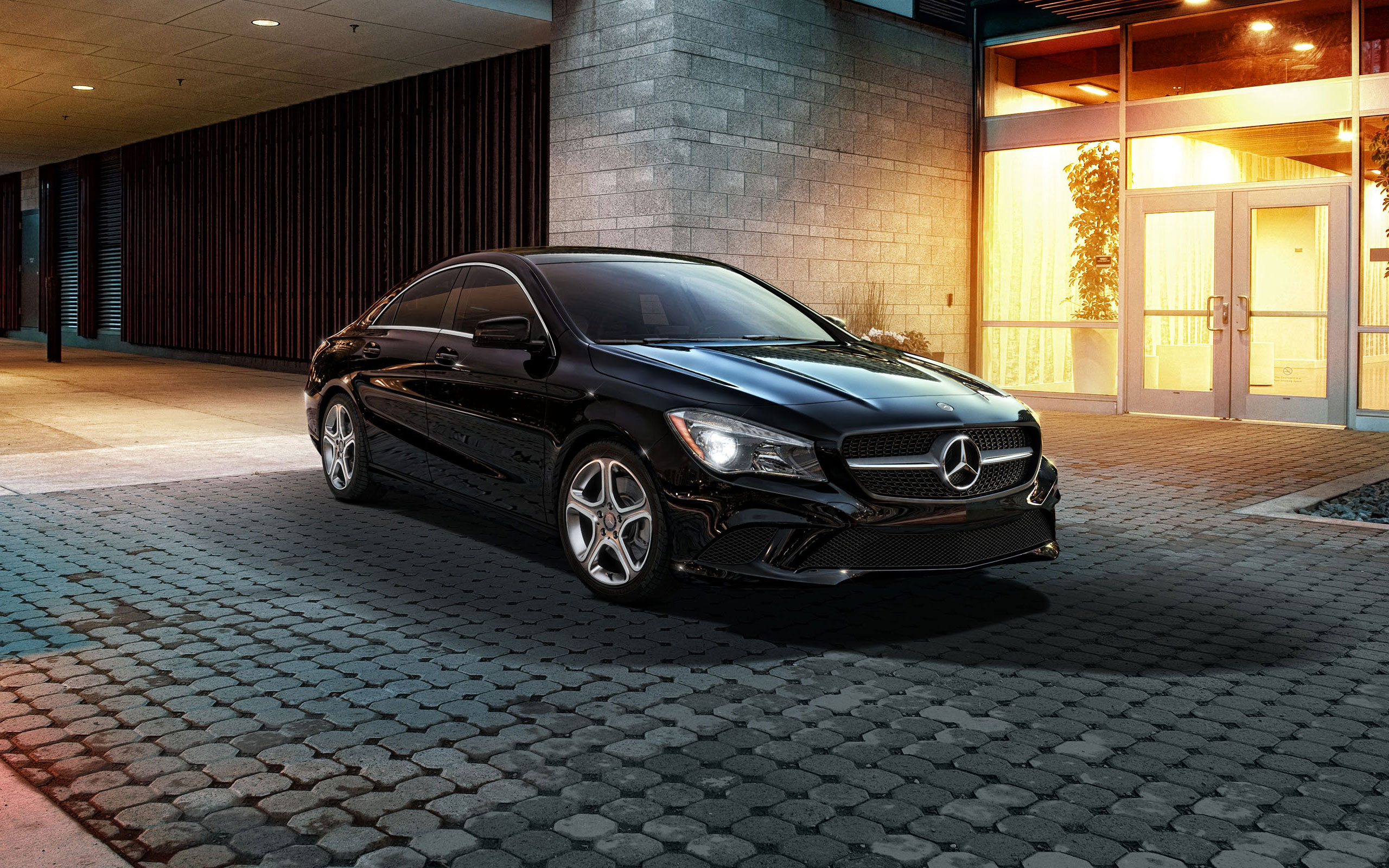