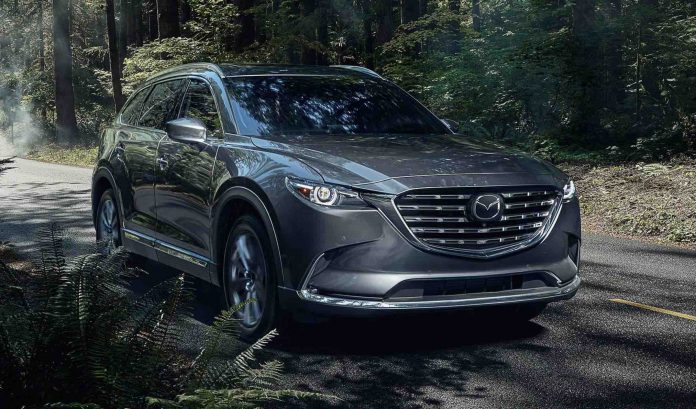 In the 1970s there was something called the Universal Japanese Motorcycle – or UJM. Whether you bought a Honda or a Kawasaki or a Yamaha, the motorcycle was essentially the same. Air-cooled in-line four cylinder engine, spoked wheels, five-speed transmission and (usually) the same general ”stance.”

The same is so today with respect to crossovers – which are also “universal”  in that they are so much alike it is often hard to tell them apart. 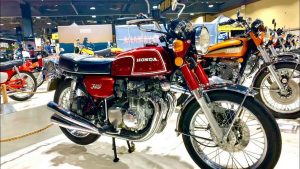 Except for this Japanese one.

Once you’re behind the wheel.

And have a look inside.

The CX-9 is Mazda’s alternative to the same, at least in terms of how it drives. Think of it as a Miata with room for six – and you’ll be on the right path.

The Mazda is the only crossover in its medium-large-sized class that has one less than the usual 7-8 seats. Instead, six – or seven – depending on configuration. It is not trying to compete directly with other medium-large-sized crossovers like the Toyota Highlander, GMC Acadia and Kia Telluride as much as offer something that isn’t just like them.

Prices start at $34,160 for the Sport trim with front-wheel-drive; adding the optional all-wheel-drive system bumps the MSRP up to $36,060. 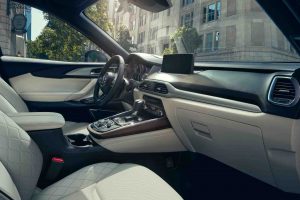 A top-of-the-line Signature trim – which comes standard with AWD – stickers for $46,805.

All trims come standard with a new 10.25 inch LCD screen.

A Carbon Edition has been added to the trim mix. It includes Polymetal gray exterior paint, red leather seats and trim, 20-inch dark finish wheels, adaptive headlights that turn with the steering wheel and heaters for the rear seats, among other upgrades. 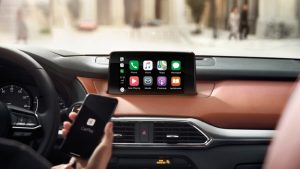 Seats five more than a Miata.

More powerful than a Miata.

One less seat than other same-sized crossovers. 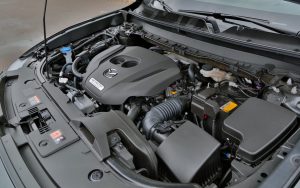 All CX9s come standard with a turbocharged 2.5 liter four cylinder engine that makes 250 horsepower and 320 ft.-lbs. of torque . . . the latter figure approaching the torque produced by a 5.0 or so liter V8, without a turbo . . . provided you feed it 93 octane premium gasoline.

If you feed the boosted four regular 87 octane unleaded, it makes 227 horsepower because the computer will dial back the boost, necessary to avoid spontaneous rather than controlled combustion (and potentially damaging engine knocking).

The good news is it makes almost-the same 310 ft.-lbs. of torque whether you feed it regular or premium, so the V8 feel down low in the powerband remains the same regardless. 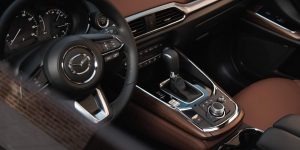 Also good news is the six-rather-than-seven (or eight or nine or ten) speed automatic that is standard equipment in this Mazda. It is not a continuously variable (CVT) automatic with no gears at all – or a seven or eight or nine or ten-speed automatic with so many gears it constantly hunts through the ranges to find the right one and thus is frequently not in the right one – at least in terms of drivetrain responsiveness.

Mazda is one of the few major car manufacturers that has not yet resorted to either of those kinds of transmissions, which have become very common because of the pressure being applied to all car manufacturers to squeeze fractional gas mileage gains out of their gas-burning engines and to reduce gas emissions (as they are styled) of carbon dioxide – regardless of the effect on drivetrain responsiveness.

CVT automatics and automatics with two or even three overdrive gears do provide a fuel efficiency advantage – just not much of one.

The CX9 carries an EPA mileage rating of 20 MPG in city driving and 28 on the highway for the FWD version and just slightly less – 20 city/26 highway – with AWD.

The AWD-equipped Subaru Ascent, which comes with a CVT automatic (and a 260 hp turbocharged four cylinder engine) rates the same 20 city/26 highway. A Toyota Highlander with FWD and an eight-speed automatic rates 21 city, 29 highway  – negligibly higher than the FWD Mazda – and 20 city/27 highway when equipped with its optional AWD system.

From the standpoint of the owner, these “gains” are irrelevances; your driving habits will have a greater effect on the mileage you actually see. 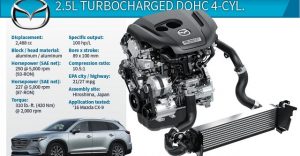 But from the standpoint of the manufacturer, a 1-2 MPG uptick on government tests helps a lot in terms of complying with  “fleet average” mileage requirements – and there is virtue to be signaled via the invisible reduction in C02 “emissions” achieved by reducing engine RPM during driving, which is what CVT automatics and automatics with multiple overdrive gears do better than automatics like the CX9’s, which have only one overdrive gear and just six gears, total.

But there is big upside for the owner – of the six speed automatic. Two, actually,

The first is how it feels. Drivetrain responsiveness. There is less hunting through the gears to find the right gear – and less of a gap in between individual gears. The Mazda drops one gear, maybe two when you floor the accelerator pedal. 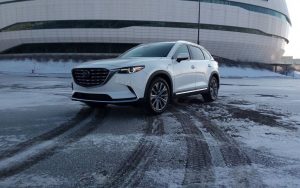 Others drop three or even four. There is an almost inevitable lag in the process of that.

There is less lag here. Which helps explain why this this Mazda is also almost as quick as a Miata: Zero to 60 in about seven seconds.

One last thing the Mazda has less of. Hasn’t got at all, in fact.

Auto-stop/start (ASS). The very-hard-to-avoid system that kills the engine automatically at every red light then automatically restarts it – after a slight delay and with noticeable vibration and noise that gets really old after a dozen or so stop/start cycles during your morning commute.

You can avoid it entirely – including the hassle of remembering to push the “off” button – by buying a CX-9. It has no “off” button. Because there is no auto-start/stop system to turn off. 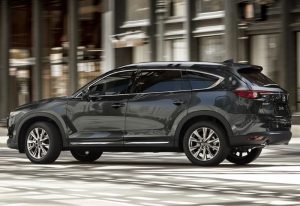 People who love cars – and driving – are not generally fans of crossovers for the same reason that people who love ribeyes don’t generally like skinned and boiled chicken breast. The problem – with crossovers – is that they’ve become necessary because cars have become less and less practical thanks to the same government fatwas which have given us such things as auto stop/start “technology,” the almost-unavoidable CVT and the seven, eight, nine-and-ten speed transmission.

When big cars and station wagons based on big cars were available at prices regular  people could afford, regular people who needed a vehicle that could carry six (or even nine, in the case of full-size wagons) bought them. When government fuel-efficiency fatwas winnowed the availability of large cars and wagons at affordable prices – and big SUVs became more and more unaffordable – the crossover trotted onto the field as the least-worst alternative. 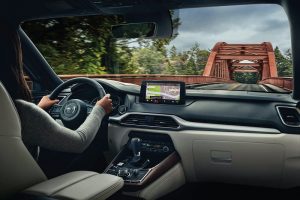 They offered room for a family – but little fun for the driver.

This Mazda offers room – and fun – which makes it very special.

It is not merely quick – which anything with sufficient power can be.  It is what people who ride motorcycles refer to as fast, meaning it is quick and adroit through the curves. Being fast is not easy. It takes skill – and it takes the right equipment.

Somehow, Mazda has dialed in the feel of driving a Miata fast in a Mazda more than twice the size – and weight. There is none of the heavy, understeering and unsettled feel when you try to be fast that you get in other crossovers this size. Most people who own such crossovers won’t notice this, of course – because they don’t drive fast (which isn’t necessarily fast in the faster-than-the-speed-limit sense). They just drive – and that’s ok – if you’re not interested in fun. 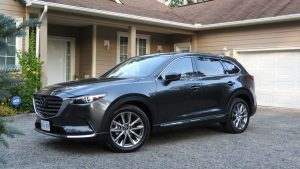 They do not notice the seven-eight-and-nine-speed automatic searching for the highest-possible gear for MPGs than the right gear for an on-throttle corner exit. They do not miss or even want the sound of a willing engine – like this engine, which makes a very pleasant sound when you’re making fast tracks.

Mazda is what BMW was, once upon a time. And for a great deal less money, too. 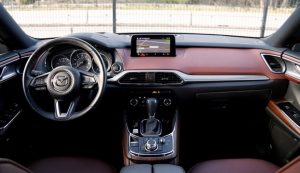 How do you make an appliance sexy?

The CX-9 isn’t a Jaguar E-Type, of course. Or even a Miata, for that matter. But it also isn’t just another crossover, god help us all. Mazda has spent time trying to give this crossover the visuals to go with the viscerals – while retaining the practicals.

It’s true the third row is tight. But this is equally true as regards the others in the medium-large class, even if they claim to seat one more than the CX-9 does. If you really need an adult-friendly third row you’ll need something considerably larger. But if all you need is plenty of room for 4-5 and 6 or 7 in a pinch, then you ought to have a look – for the same reason that you wouldn’t have a look at a home with several more bedrooms than you need but as many as you do need. 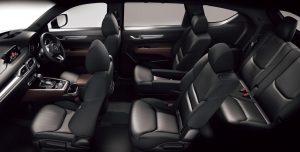 The second row has just shy of 40 inches of legroom – more than is needed by all but the NBA tall. Up front, there’s more – and behind the third row, there’s still more room for cargo (14.4 cubic feet) than in all save the largest cars and the room they have can’t be increased to 71.2 cubic feet by lowering the rear seats.

All trims get the new/larger 10.25 inch LCD display, seat heaters (up front) three-zone climate control and rain-sensing wipers,with the option to buy AWD without having to ascend to a more expensive trim. 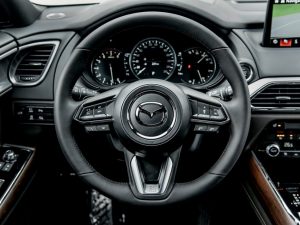 On the other hand, if you want the excellent Bose 12-speaker premium audio rig, you have to ascend to the Touring or higher trim, which also makes it feasible to get the big sunroof and wireless cell phone charger.

the new-for-2021 Carbon Edition gets you practically everything else, including heaters for the back seats, a heater for the steering wheel and the windshield wipers – a very handy thing in an ice storm.

One of the few areas where the CX-9 falls functionally short of other medium-large crossovers is in terms of how much it can pull, which is only 3,500 lbs. (vs. as much as 5,000 lbs. for models like the Toyota Highlander and Subaru Ascent). This is a significant limitation if you need to pull more – and also to pull more comfortably. If a vehicle is rated to tow 3,500 lbs., say, it can handle towing that much. But if it is rated to tow 5,000 lbs., it can tow 3,500 lbs. easily. 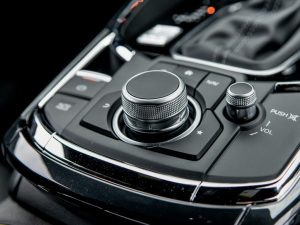 One other area where the CX-9 comes up a little lacking is its attractive but more-difficult-to-use vs. others infotainment system. Instead of a simple, one-step control knob to make station changes, for instance, you have to first scroll/push through menus to find the << and >> to change stations and then scroll/push to actually change the  stations. It’s not terrible once you get used to it.

But you do have to get used to it.

Once you’ve figured out how to change the radio station to your stations, you’ll be ready for a drive like none other in this class.

Which makes it worth a little hassle changing the station.