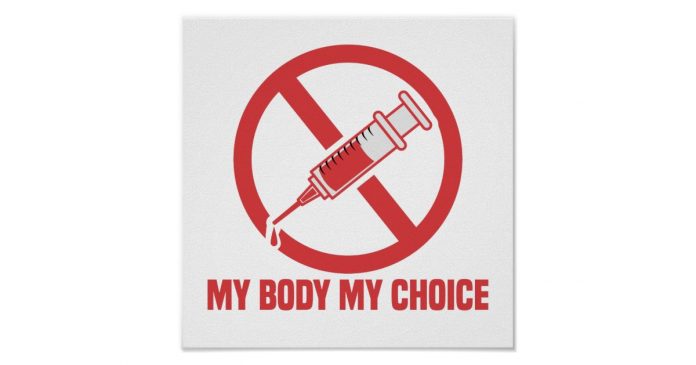 One of the more glaring cognitive dissonances of our time is the assertion, on the one hand – and usually asserted most stridently by people on the Left – that their bodies are inviolable . . . when it comes to their decision about whether to abort the life they are carrying. And on the other hand, the assertion – most rabidly asserted by the same people – that everyone else must submit their bodies for medical treatment that might just abort them.

So much for their contrary decision about their bodies.

This is not meant to be an article about abortion, per se. I merely use abortion to try to make the point about the situationally pirouetting intellectual dishonesty of the Left, which is most aggressively pushing for the violation of everyone else’s body while at the same time unctuously demanding theirs be respected, absolutely.

Even though it’s not their body that’s at issue as regards their most militantly hewed-to issue.

Abortion is by definition the ending of a life. This is inarguable, a biological fact – no getting around it and no matter how awkward or inconvenient the fact may be for some to deal with.

It is also not the life of the mother that is ended when an abortion is performed. Another inarguable fact – vociferously denied by those who know it is a fact and so obviates their talking points about their body. 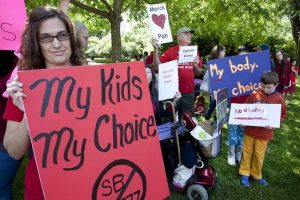 One can debate whether a fertilized egg is a human being. It is not debatable (if the debate is to be intellectually honest) that it is alive, as a statement of fact. And that it is a different life. One that may not yet have the form of a human, fully developed. But one that does have life – and the DNA of a human being – and not the same DNA as its mother’s.

Leftists demand the choice to end that life as a “right” that flows from the fact that the life they are choosing to end is within their body.

Leaving aside whether that makes it ok, if that is their right, then why do they deny the right of others to choose not to risk their own lives – by having a substance injected within their bodies? 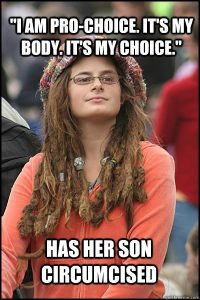 It does not matter whether the substance is harmful – or beneficial. Because it is their body and it is a violation of the body to put something into it that its owner doesn’t wish to be put into it.

It is the difference between rape – and sex.

More precisely, between sex with someone you know and trust and rape by someone you don’t know who might be infected with something that could destroy your health – in addition to the violation of your body.

The Leftist will say: But you have no right to threaten to others by not immunizing your body such that it cannot harm the bodies of others. This is quite an assertion – coming from people who assert their right to actually end the life of another, fully formed or not.

A person who isn’t sick cannot get anyone else sick. This is a fact, inarguable.

The first fact that can be adduced to counter the assertion made about hypothetical  threats to others used to impose actual harms on those who have not caused them.

The second fact is that the Un-needled do not threaten those who have been Needled – if we proceed from their assertion (in favor of Needling) that Needling renders the Needled immune from the threat that is the basis of their assertions. Worrying about the un-Needled status of others is like someone who isn’t pregnant worrying about their having an abortion.

Thirdly, the asserted threat to the Un-needled themselves is logically no more concern of others – and especially of the Needled (using the logic of the Leftist) than it is the business of others whether a woman chooses to abort the life she is carrying.

But expecting intellectual honesty from the Left is like expecting a fish not to swim. It is contrary to the nature of both.