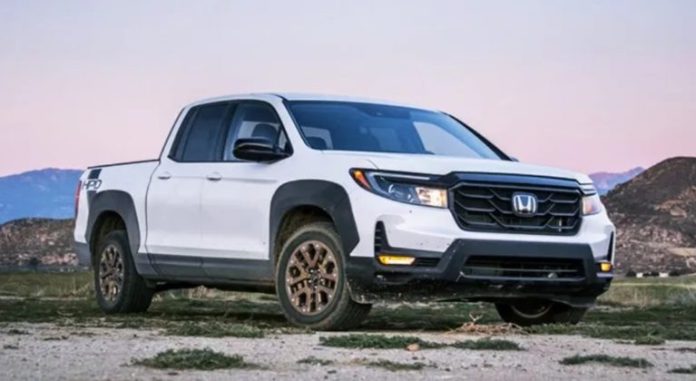 Honda was the first to sell a mid-sized truck that isn’t one – the Ridgeline. And many people love that about it.

That it has a bed, like a truck. And – unlike most “real” trucks – additional storage under the bed. That it can pull a 5,000 lb. trailer – which most cars can’t. And carry a 4×8 sheet of plywood, flat – which no traditional mid-sized truck can.

But it has more in common with cars – under its skin – than it does with the traditionally designed mid-sized trucks it’s an alternative to. 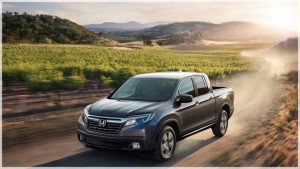 The Ridgeline looks like a mid-sized/crew cab pick-up truck, but looks can be deceiving – in a good way, if what you’re looking for is something that can do many of the things a mid-sized truck can do, as well as things they can’t  . . . without being a mid-sized truck.

It’s designed to not get stuck. 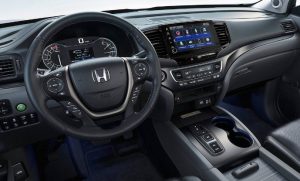 AWD is standard and (as is the case in most AWD-equipped cars) most of the time, most of the engine’s power goes to the front rather than the rear wheels.

Prices start at $38,800 for the base Sport trim, which comes standard with a Class III trailer hitch and wiring, a seven speaker audio system and three-zone automatic climate control. 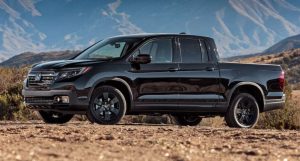 There are also RTL ($41,780), RTL-E ($44,730) and Black Edition ($46,230) trims, the latter coming standard with blacked-out exterior trim, black leather seats with red accents and all of the amenity upgrades that come in the RTL-E, including an upgraded audio system, heated steering wheel and wireless phone charging.

The Ridgeline can be thought of as an alternative to mid-sized trucks such as the Chevy Colorado/GMC Canyon, Nissan Frontier, Ford Ranger and Toyota Tacoma. 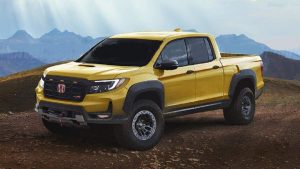 The Ridgeline carries over unchanged from 2022. But the price of the Ridgeline has been “updated” by $660 across all trims – to reflect the diminishing value of the currency it takes to buy this vehicle.

There is a rumor about a pending Type R variant with a 300-plus horsepower engine and a plethora of macho upgrades that may be introduced later in 2023, probably as a ’24 model. 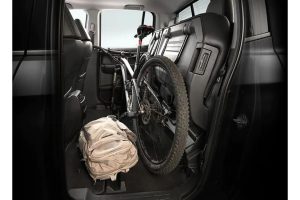 The perfect truck for the buyer who doesn’t want one.

Multiple clever storage built-ins, in addition to the bed.

Comes standard with Honda’s superlative 3.5 V6, which you can’t get in any Honda car anymore.

Not the truck for the buyer who really needs one.

Costs more than traditional mid-sized trucks such as the Toyota Tacoma, Chevy Colorado and Ford Ranger – which do offer different cab configurations. 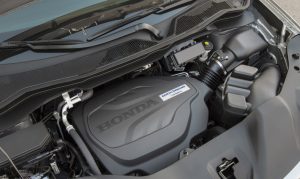 The Ridgeline comes standard with what used to be available in Honda cars such as the Accord, but no longer is. That being Honda’s brilliant 3.5 liter V6, an engine that is both revvy and reliable – as well as powerful. Honda’s new cars all come standard with little fours now – their output boosted by turbochargers. But they’re still not as powerful as the 3.5 liter V6 you used to be able to get in the Accord that didn’t need a turbo to make power.

That engine is still standard in the Ridgeline – where it makes 280 horsepower and will never bother you with a bill for a toasted turbo. Instead, it has variable valve timing (VVTi), 11.5:1 compression and a 6,900 RPM redline. It is paired with a nine speed automatic that has four overdrive gears (6th, 7th, 8th and 9th) with the final overdrive gear (9th) being a really deep (0.480) overdrive that dramatically reduces engine RPM at steady-state cruising speeds. 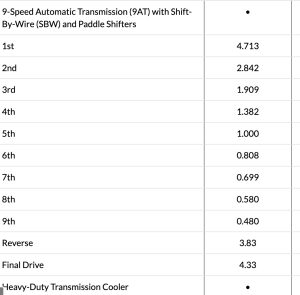 That’s about the same mileage (20 city, 23 highway) as advertised by the four cylinder-equipped Toyota Tacoma, which also is only rated to pull 3,500 lbs. – vs. 5,000 lbs. for the Ridgeline.

On the other hand, you can buy a new base trim Taco for about $28k – which is about $10k less than the Ridgeline’s base price. And even with the optional V6 (and a maximum tow rating of 6,700 lbs.) the Taco still costs a lot less.

And doesn’t use much more gas.

But then you’d have a truck – and maybe you don’t want or need one. 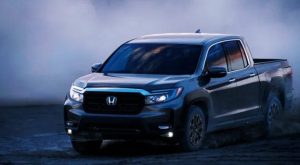 This is a truck that drives like a car – which is why it’s the right truck for the buyer who doesn’t need or want to drive a truck but who likes the additional utility – vs. a car – of having a bed in the back.

Honda’s not the first to offer such a vehicle.

Some will remember similar vehicles like the little truck VW offered back in the late 1970s that was based on the Rabbit, which was a small car. Add a bed – and there you go. Others are offering similar takes on the same concept today, including Ford (Maverick) and Hyundai (Santa Cruz) but only Honda offers a mid-sized take on this concept. 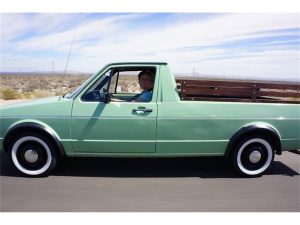 Which means the Ridgeline is the only alternative to a mid-sized truck that isn’t one.

And that means you can avoid having to drive a mid-sized truck while enjoying most of the benefits of owning one, including having a bed in back for wet dogs or wet bags of mulch.

Or a 4×8 sheet – which will fit flat in the Ridgeline’s bed. It won’t in the beds of traditional mid-sized trucks (explanation as to why follows below).

You also won’t need a step-ladder to get in – or get at – the things you put in the bed. Your dog can jump into the bed, no ramp required. And because it’s not as jacked-up as the typical truck, it handles more like a car than the traditional truck it isn’t. If you’re someone who doesn’t like the jacked-up feel (and fact) of a traditional truck, this may be exactly the non-traditional truck you’ve been looking for. 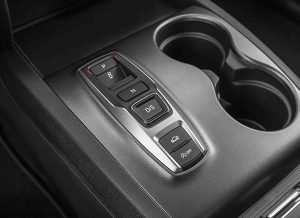 Especially if you need a vehicle that can also comfortably – can reliably – handle pulling a 4,000 or so pound trailer or small camper.

The Ridge is rated for 1,000 lbs. more than that – which means plenty of margin for pulling 1,000 lbs. less than that. And 4,000 lbs. is substantially more than most cars of any size (and most mid-sized crossovers) are rated to pull, which is typically 3,500 lbs.

A mid-sized truck like the Taco can pull more, of course. But then – again – you’d be driving a truck. 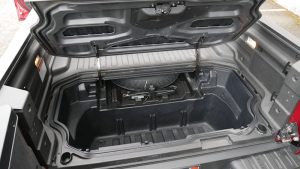 It does look like a truck – but look a little deeper and you’ll see some things trucks that actually are do not have.

Like the trunk that’s under the Ridgeline’s bed. It’s the perfect place to stow things you may not want to leave unsecured in the bed, where they are exposed to grabby hands – as well as the weather. The under-the-bed trunk is weather tight as well as out-of-sight and it’s there precisely because the Ridgeline is not a traditional truck and doesn’t have the big hunk of cast iron – the solid rear axle – that would otherwise be under there. That leaves room under there, for things like a trunk under the bed. Where you’ll also find the spare, so you won’t have to crawl around under this truck-that-isn’t to get at it, in the event you get a flat. 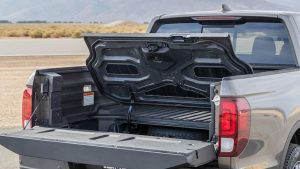 You’ll also see that the bed floor is wider through the hips than it is in traditional mid-sized trucks – because the wheelwell arches are lesser – once again by virtue of the fact that the Ridgeline isn’t a traditional truck. It just looks like it is. The rear suspension is lighter-duty car-crossover-like and that takes up less room under there than the bulky, heavy-duty leaf springs/coils and beefy solid axle you typically find underneath the bed of a traditionally designed truck.

Then there’s the floor – in the cab. 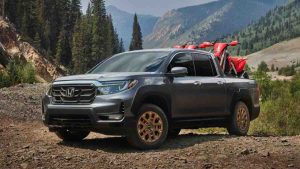 Unlike what you’d find inside a traditional truck, there’s less of a hump dividing the Ridgeline’s cabin down the middle. Indeed, the floor in the rear is essentially flat, allowing much more comfortable seating for a middle (third) passenger back there.

Another area where the Ridgeline differs from the traditionally designed mid-sized trucks it was designed to be an alternative to is the shape of the thing. For good or bad it comes just one way: Crew cab, five-foot-three-inch bed. Traditionally-designed mid-sized trucks like the Taco, Chevy Colorado, Ranger and Nissan Frontier are available in different shapes – crew or king/extended cab versions – and so better suit buyers who need a bit less cab (and perhaps a lower price). 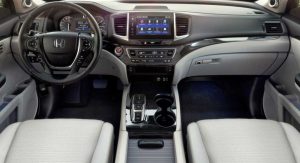 But the Ridgeline’s primary purpose is passenger service, with the upgraded capability no passenger cars – and for that matter, crossovers – offer (try hauling a 4×8 sheet in any of them and see).

Accordingly, it comes just one way – and that hasn’t un-swayed the many people who’ve bought a Ridgeline because it comes just the way they need it.

The main options, then, are trims.

The RTL adds leather seats (and a leather-wrapped steering wheel), heated outside mirrors and a sunroof. The RTL-E adds a heated steering wheel, upgraded stereo with eight speakers, GPS navigation, wireless phone charger – plus LED bed lights and a 120v three-prong electrical outlet in the bed. The Black Edition comes with all the foregoing plus the blackout treatment (wheels, exterior trim, leather on the inside). 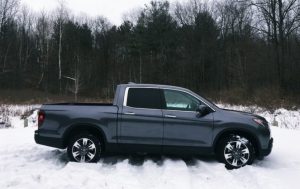 There are also a number of a la carte items that can be added to any Ridgeline trim, including a bed divider system, a bed speaker system, folding tonneau cover, roof rails and running boards.

The other major – defining – difference between the Ridgeline and the traditional trucks it was designed to be an alternative to is that it’s all-wheel-drive vs. four wheel drive.

Actually, it is AWD – vs. rear-wheel-drive.

Trucks being traditionally oriented that way unless ordered with 4WD. If not, all of the engine’s power goes to the rear wheels only. The front wheels steer, only. They neither pull nor push. A rear-drive (2WD) truck will for that reason typically have less traction on slick surfaces, even if it looks like it could go anywhere. The AWD Ridgeline is thus more grippy on wet and snow-slick roads than a 2WD truck. And its AWD system has the ability to modulate the the power split, from front to rear. Many truck-type systems send exactly 50 percent to the front and 50 percent to the rear – when the 4WD is engaged.

AWD is always engaged, so you don’t need to worry about the power split. 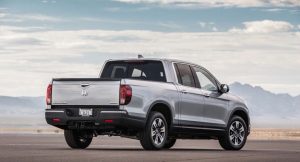 What the Ridgeline doesn’t have – because it’s not a traditional truck – is a two-speed transfer case and 4WD Low range gearing. That is what gives a traditional truck – when so equipped – a leverage advantage in severe conditions, such as rock-crawling or slogging through really deep snow/mud, especially off-road. But if you don’t need your vehicle to be capable of doing that – if all you want is to not get stuck when it snows – why lug around all that extra equipment (and weight)?

If you like the idea of having a truck but not actually having one, the Ridgeline could be just the alternative to a traditional truck you’ve been looking for.