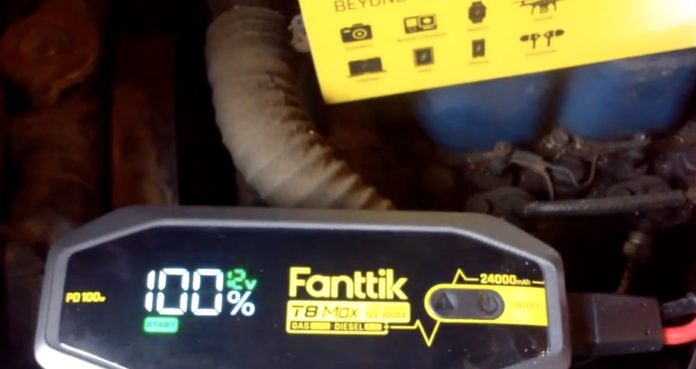 Every once in awhile I get sent a gadget to try out and tell people about. Here’s the latest – a 3000 amp lithium-ion jump box made by Fantikk that – the manufacture claims – has the juice (when fully charged) to start even the biggest diesel (8.0 liter) engines and gas engines bigger than any that have been put in a new car since the last V10 equipped Viper was made back in 2017.

It had no trouble at all cold-starting my diesel tractor on a cold December day.

But what appealed to me the most about it was its size. My other jump box is about twice the size and so doesn’t fit under the driver’s seat of my truck. The Fantikk unit does. Its uncumbersome size also makes it more usable as a portable energy storage system for devices.

This unit could probably run a laptop for days – even weeks. It also has a built in flashlight, which is handy by the side of the road or out in the woods (if you’re camping).

Most handy of all, however, is not having to deal with using your car’s battery to jump someone else’s dead one. That was always a hassle but it’s become more so on account of the fact that many newer cars have their batteries tucked away under covers or in places that are hard to get at.

If you have a jump box, you only have to deal with one battery. And you won’t need clunky, long cables to connect your (good) battery to the other guy’s dead one.

So, an EPautos’ thumbs-up for the Fantikk T8!

Obama To Ban Importation of Ammo, Magazines and Accessories Without Congressional...