Historically, Buick was GM’s “discreet Cadillac”—a high-end car without the high-end ostentation. For many years, Buicks were known as “doctors’ cars” for just that reason. Ownership indicated you had money, but weren’t looking to flaunt it.

Like GM’s Oldsmobile and Chevrolet divisions, Buick was named after an actual person, its founder—David Dunbar Buick, who emigrated from Scotland as a child with his parents in the early 1850s.

Historians date the first Buick to 1903. Five years later, in 1908, Buick was building more cars (8,000 or so in total) than either Ford Motor Co. or Cadillac combined.

By the mid 1920s, the company was selling more than a quarter-million cars annually.

For decades after its incorporation into the GM family, Buick—also like other GM divisions—operated as a semi-autonomous company. It had its own, in-house engineering department that produced Buick-specific engines that made Buicks more than just rebadged GM generic cars.

These engines—especially the overhead valve “nailhead” V-8 in Wildcat, Super Wildcat and GS variants—were among the most powerful engines ever fielded by an American automaker.

Though younger readers may think of today’s Buick as a purveyor of dowdy sedans for the senior citizen set, the truth is that during the company’s salad days in the late 1950s, ’60s, and through the mid-late 1970s, it produced some of the most stylistically daring and physically impressive machines ever to come out of Detroit—or anywhere else.

Of the humongous 7–9 passenger station wagons built during the heyday of the Heavyweights, one of the standouts—and the longest to endure—was built by Buick.

Like the better-known Oldsmobile Vista Cruiser it shared a platform with, the Estate Wagon was the minivan of the 1960s and ’70s. Two generations of kids grew up the right way—with carbureted V-8s and rear-wheel-drive. Later, less fortunate generations would never know the magnificence of those days. Instead, their childhoods were spent strapped into booster seats in pitiful front-drive, four-and-six-cylinder K-car-derived shoeboxes full of safety devices but utterly devoid of personality.

They know not what they missed.

Some history: The name, “Estate Wagon” dates back to the early 1940s, when Buick used it as a trim designation on the ’40 Super—and later the Special and other wagonized versions of Buick’s large sedans. Over the years, it was used to designate both a wagonized version of an existing model of sedan and as a separate model in its own right.

These jumbo-sized family-movers grew to their full magnificence during the early 1970s. By the ’70 model year, the Estate Wagon’s wheelbase was a very solid 124 inches—still not quite up to the fulsome 127 inches of the 225 sedan, but respectable. This would grow three more inches the following year, to 127 inches—and dead even with the hulking “deuce and quarter.”

Early models featured “woodie” side panels and G’s famous “clamshell” flip out/flip-down tailgate system that survived well into the 1970s. Base models had twin-bench seating but an optional third row could be specified.

Sportwagon versions shared the iconic raised roof section with glass side panels also offered on Oldsmobile’s Vista Cruiser. Those fortunate enough to have grown up with an Estate Wagon will have fond memories of rolling around like logs in the expansive cargo area—mom and dad distant presences, far away up front. There were no mandatory child restraint laws in those days—and seat belts were definitely optional.

Most of the big lunkers from the early-mid Disco Era also came standard with Buick’s mountain Motor, the 7.4-liter 455 working through a heavy-duty three-speed turbo-hydramatic. Teenagers quickly learned the trick of flipping over the air cleaner lid to let the huge Quadrajet four-barrel carb breath easier—its banshee wail reaching full throat fury as the secondaries opened up. Power-braking the big V-8 roasted the whitewall tires out back, which disappeared in a haze of blue smoke, molten bits of rubber glazed on the lower rear quarters the only evidence of many a 16-year-old’s first experience of “high performance.”

Unfortunately, as the ’70s progressed, big engines began to disappear—even though cars like the still-large Estate Wagon very much required their services. ’76 was the final year for the 455. The Buick V-8 (including the small-bore 350) would be discontinued shortly thereafter. Beginning with the 1980 models, the biggest gun available was an Oldsmobile-sourced 5.0-liter 307-cubic-inch V-8 that struggled under the yoke of the Estate Wagon’s curb weight.

The end for the Estate Wagon is somewhat indeterminate. 1990 was the final year for the “old” style—and for the rear-drive Estate Wagon as a distinct model within Buick’s model lineup. This was also the last year an Estate Wagon left the factory equipped with the Oldsmobile-sourced 307 V-8, detuned to 140 hp.

However, a larger, rear-drive Buick wagon did returned in the early 1990s; this was a wagonized version of the new Roadmaster—which was a Buick-trimmed version of the new Chevy Impala—a car that was sometimes derisively referred to as “Shamu” because of its whale-like rounded girth.

Both cars shared the same “corporate” (Chevy-built) drivetrains based on the Corvette’s 5.7-liter 350-cubic-inch V-8. So even though Buick identified its version as the Buick Roadmaster Estate Wagon, which ran through 1996, it was, at best, a faint echo of the full-blooded versions that preceded it.

* Decades before GMC used the name for its version of the Chevy El Camino, Buick sold an Estate Wagon Caballero. This model was only offered by Buick for two model years, from 1957–1958.

* Most of the ’70s-era Estate Wagons were built at the plant in Arlington, Texas, which was given over to the production of pick-ups and SUVs after GM cancelled the last of its large, RWD sedans and wagons in the mid 1990s.

* The 1953 Estate Wagon was the last “woodie” wagon to use real wood exterior body panels. Subsequent models had all-steel bodies.

* By the 1980s, the Estate Wagon (and its “twins” within GM) was one of just two full-size, rear-drive, V-8 wagons still in production. The other was Ford’s Country Squire—which Ford cancelled after 1991, leaving the Roadmaster Estate Wagon to soldier on by itself until 1996. 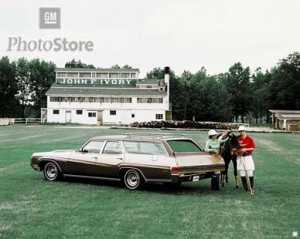 Do You Miss Steering Wheels?