A reeling and soon-to-be bankrupt Chrysler Corp. produced one of the most pathetic paper-tiger muscle cars ever in the embarrassing 1976to 1980 Dodge Aspen R/T and the Aspen’s sister car, the Plymouth Volaré Road Runner.

Tapped as the replacement for the aging Plymouth Valiant and Dodge Dart, the Aspen and Volaré would be among the last all-new designs to issue from Chrysler before the Big Crash (round one) came.

Like their colleagues at Ford, desperate Chrysler product planners dredged up a couple of great nameplates from the company’s better days—the legendary Road and Track, or “R/T,” designation for the Aspen; “Road Runner” for the Volaré—and glued ’em on cars whose only relationship to performance vehicles was the commonality of internal combustion—and even that connection was tenuous.

Under the hood of these stinkers was what Chrysler called a “time tested” 318-cubic inch V-8 that sucked air through a “lean burn” Carter two-barrel carburetor. The thinned-out air/fuel ratio made the otherwise decent workhorse engine notorious for hard-starting, stalling, and poor driveability. Tune-ups were necessary at every other fill-up, it seemed, because the cars just never ran rightor ran right for very long.

The Aspen R/T and Volaré Road Runner’s performance was more dispiriting—even by the standards of the mid-1970s, when the fastest sports cars were slower than most of today’s V-6 family cars.

Pedal to the floor and wind at your back, the sad combo of a 318 V-8 and Torqueflite automatic delivered top speed comparable to a UPS delivery truck with a stuck throttle—about 108 miles per hour, flat out. Quarter-mile times were equally gimpy—a heaving 16.7 seconds at 85miles per hour.

The final insult? Every 1976 and 1977 model was recalled for premature rust-through. Lee Iaccoca himself later admitted the cars had been “rushed to market too soon.”

It might have been better if they’d never made it at all.

Like most of the other strangled, would-be performance cars of the early catalytic converter years, there was no room for a true dual exhaust system on either the Aspen R/T or Volaré Road Runner—so all cars left the factory equipped with a restrictive single exhaust system that sapped even more vitality from an already vitiated drivetrain. (At least they still had those fast-sounding brand names: Aspen and Volaré.)

An over-the-top “Super Coupe” variant of each car was offered in 1978; about 1,000 of these were built. These cars had a larger 360 V-8 with either 155 horsepower (two-barrel) or 160 horsepower (four-barrel). Super Coupes had NASCAR-themed body kits, fender flares, louvered rear quarter windows, and wider wheels than regular Aspens and Volarés—but no significant mechanical upgrades. (We can’t give you what you want, but we can give you something that kind of looks like what you want.)

The “F-Body” Aspen and Volaré were among the last rear-drive Chrysler passenger cars built before the company went bankrupt and switched over to the front-drive Aries K-car in 1981. More than a decade would slip by before another rear drive coupe—the Viper—would be offered.

Aspens and Volarés share identical exterior body panels; only different grilles and tail-light treatments separate the two cars. However, buyers had to go upmarket to a Chrysler Cordoba if they wanted to get “rich Corinthian leather.”

The Aspen and Volaré were replaced in 1981 by the soon-to-be infamous K-cars. (The K-cars were a clever ploy to make people feel better about the Aspens and Volarés.) 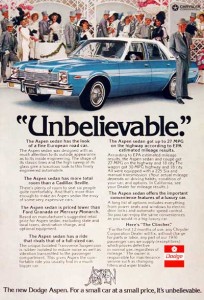