Lee Iaccoca gets blame (or credit) for the Dodge Aires and Plymouth Reliant K-cars, but unlike the minivan, this one’s really not his fault. He simply took the ball and ran with it.

Though Iaccoca touted the virtue of K-cars aggressively once onboard as Chrysler’s newly installed chairman (after having been fired by Henry Ford II), the K-car had been in development since the late 1970s—when it finally dawned on Mopar management that battling the surge of high-quality Japanese imports with vinyl-roofed Volarés and Cordobas decked out in “rich, Corinthian” leather probably wasn’t going to turn out well.

Still, the change in scenery that took place between 1971 and 1981—the year of the K-car’s launch—was dramatic. It had only been ten years since the Chrysler Pentastar ruled the streets with 375-horsepower 440 Super Commando Road Runners and 425-horsepower 426-cubic-inch “Street Hemi” V-8 powered Chargers, GTXs, and ’Cudas—cars with the vein-popping stage presence of Arnold Schwarzenegger at his Mr. Universe prime. But by the early 1980s, a “Hemi” badge on the fender of an Aires-K or Reliant meant a Mitsubishi-sourced “Silent Shaft” 2.6-liter four cylinder with a two-barrel carburetor—and 92 horsepower. No pistol grip shifter for you, buddy boy. How about some dog dish hubcaps and an 85-miles-per-hour “federal” speedometer?

Chrysler’s own engine—the 84-horsepower 2.2-liter “Trans-Four”—was the K-car’s standard engine. It would entertain its owners with an erratic, surging idle caused by the problem-prone computerized spark-control unit that resulted in the engine’s timing jumping by 2 to 5 degrees for no apparent reason. When Chrysler switched to a slightly less crude Throttle Body Fuel Injection (TBI) system in the mid-1980s, it created another form of in-car amusement. As one contemporary reviewer wrote: “Chrysler’s TBI motors had a rather steep throttle tip-in, meaning if you tapped the rather stiff gas pedal, you got a lot of revs. Starting an automatic K-Car without jerking your passenger’s neck required a bit of practice; with the five-speed’s clunky shifter and abrupt clutch, driving smoothly was nearly an art form.”

Yet this was this car that lead to Chrysler’s return from the abyss and enabled the company to go on to bigger and better things—like the minivan.

In Mexico, the K-car was sold as the Dart rather than the Aries-K or Reliant. Chrysler might have been worried about the problem Chevy had when it exported the Nova to Latin America. In Spanish-speaking countries, “Nova” can be translated as “doesn’t go.” (But “Dart”? The K-car darted like a beached walrus with bad depth perception.)

The K-cars, though pitiful and depressing, were a huge commercial success—and enabled Chrysler to return to profitability by 1983.

The 1981 models had bench seats for both front and rear seat passengers. The rear windows didn’t roll down. (Some owners liked to pretend it was a very slow police car. “Settle down back there, ya skell!”)

Zero to 60-miles per hour times varied from a low of 18.1 seconds to as sprightly as 10.6 seconds. Fuel injection and other improvements to the later cars accounted for much of the difference. 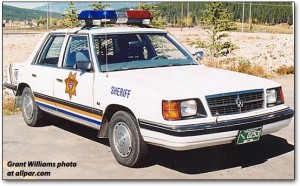