One of Buick’s greatest early Dreadnoughts was the short-lived but extremely memorable Invicta series, which made its debut in 1959 as the replacement for the Century.

The unusual name derives from the Latin for “invincible,” or “that which cannot be conquered.”

The full-sized Invicta rolled on the same 123.3-inch wheelbase as the LeSabre and was offered in four different flavors—hardtop coupe, convertible coupe, sedan, and station wagon.

The coupe—considered the “lightweight” of the bunch—crunched the scales at nearly 4,300 pounds. The six-passenger wagon bumped that up to 4,660 pounds—about 250 pounds more than a 2009 Ford Explorer SUV.

Luckily, this was the era when leaded Hi-test flowed like the Mississippi—and engines like the 401 (new for ’59 and packing 325 horsepower) stood ready to move all that metal. It mattered not that the 20-plus gallon tank ran dry in 200 miles or less when fill ‘er ups cost about five bucks.

This was the Golden Time—and the Invicta, its appropriately named chariot of the gods.

The 1960 coupe was surely one of Detroit’s masterpieces of size and exuberance—the perfect car for the New Frontier. Its overall shape was somewhat similar to the Series 62 Caddy, but with highly distinctive upward canted wings rising from the front fenders that gave the car the sinister countenance of a gigantic manta ray bearing down on its helpless prey. These tapered down the car’s flanks, where they eventually joined up with the bullet-nosed brake lights. A secondary pair of wings arose from the back quarter panels and stretched all the way to the A pillar by the front windshield. A bubble-top canopy and skirted rear fender wells completed the effect.

It was a raucous tour-de-force of Buick burlesque whose only equal within GM’s hierarchy is another Buick—the “boat-tail” Riviera of the ’70s.

Sadly, it was a short-lived tour-de-force.

A major restyle for ’61 resulted in a far less radical but no less large design; the car still rode on the immense LeSabre wheelbase and also carried the 325-hp 401 deep inside its boiler room.

Oddly, Invicta wagons made intermittent appearances over the series’ model run. They were available in ’59—then tabled for 1960, only to reappear on the roster again for 1962 and the final year, 1963.

Today, these are rarely seen at all—even at car shows.

However, the event that ultimately sealed Invicta’s fate was the success of what was—at first—a specialty sub-model within the Invicta lineup. It appeared in 1962 and was named Wildcat. It was intended to be a sport-luxury version of the Invicta and it did so unexpectedly well (despite its high for the times $4,000 sticker price) that GM management decided to drop the Invicta name entirely.

Beginning in 1963, the Wildcat took over—leaving Invicta to the history books.

Today, early Invicta coupes especially are two things investors and collectors ought to appreciate: inexpensive and quasi-exotic. They stand out at car shows like Anna Nicole Smith at a convent. Even better, you can pick one up in near perfect/restored condition for under $15,000.

Wagons and sedans can be big fun, too—though these are considerably harder to find as most have long since embraced the crusher and found new life as beer cans.

* Invicta was one of the shortest-lived Buicks, with a model run that lasted just four years.

* The Invicta name has been resurrected—but for export market (China) use only.

* Buick Portholes (three) appeared in 1961, along with an “ironing board” side scallop treatment.

* The Invicta had a two-piece driveshaft with a constant velocity joint in the center. This was deemed necessary to allow for driveline flex over the enormous length (213.2 inches) length of the car. 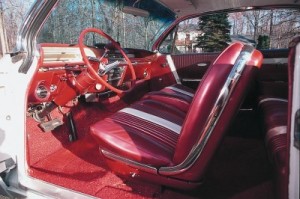