By 2016, per federal mandate, all new cars will be required to average 35.5 miles per gallon. This sounds like a big deal. It isn’t – except in terms of how much we’ll all be paying for this grand achievement. Either directly – in the form of “gas guzzler” penalties tacked onto the MSRPs of new cars that don’t make the cut. Or indirectly – in the form of elaborate technologies such as automatic engine stop (like hybrids, but for non-hybrid cars), smaller displacement engines fitted with turbochargers, gas direct injection, etc. – for those that do make the cut. 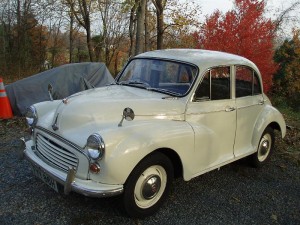 The real big deal is that it’s perfectly possible to build cars that achieve an average of 35.5 MPG – or more – without federal mandates,  without elaborate technology and without the suffocating expense that comes with both.  Hell, it’s already been done.

Friends of ours own a 1970 Morris Minor, which I keep up for them. For those not familiar with the Morris Minor, it was Britain’s answer to the VW Beetle (original model). Though differently laid out (it’s got a water-cooled and front-mounted engine vs. the Beetle’s rear-mounted and air-cooled engine) it was very similar in concept. It was designed to be simple, economical transportation. Thus, above all else, it was light.  The 1970 Morris sedan weighed just under 1,700 lbs. – which made it slightly heavier than the Beetle. But both cars weighed about 600-800 pounds less than their contemporary equivalents. A 2012 Mazda2 sedan, for instance, weighs 2,306 lbs. Even the tiny Fiat 500 – which is nearly a foot shorter overall than the Morris Minor – tips the scales at 2,363 lbs. (It actually weighs more than the physically larger, four-door Mazda!)

The point being, they’re both beefy.

The Morris – and the Beetle – were not. As a result, they were capable of posting gas mileage numbers almost as good as a current-era Prius hybrid, but without all the folderol.  And far better than non-hybrid cars like the Mazda2 and Fiat 500.

Here’s some factory data about the Morris Minor’s fuel consumption: 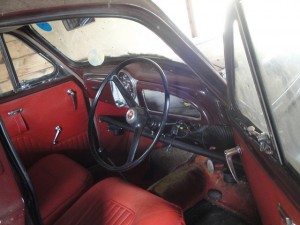 Now, the Morris was not a speedy car. About 75 MPH is as fast as it goes.  So it would not be the ticket for sustained highway driving today. However, as a city car or commuter car, it – or something like it – would certainly be viable. People already buy far less viable cars – like the (so-called) Smart car, for instance. It maxes out at 38 MPG on the highway – and 34 in city driving – both numbers lower than the Morris Minor’s. In the case of the city-driving numbers, much lower. And the not-so-Smart car is barely more viable on the highway than the Morris. Its top speed of 90 MPH is only nominally higher  than the Morris’ – and its extremely short wheelbase and tall profile make it much more susceptible to being knocked around – or off the road – by crosswinds.

Meanwhile, the Morris is arguably more suitable as a city car. It’s a sedan, for openers – so it can seat four people – vs. just two in the Smart. And by dint of having a back seat area – and a trunk – it has more usable room to carry groceries and so on than the not-so-Smart car. 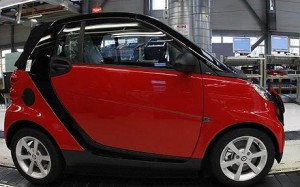 The larger point being: The 40-something-year-old Morris makes more sense – and costs a lot less – than a modern micro-car like the Smart. Which, by the way, also weighs more than 2,300 lbs.

This is absurd – but it’s also an inevitable consequence of the conflict between building cars that meet ever-higher federal crashworthiness requirements that are also expected to meet ever-upticking federal fuel economy requirements. The two objects are to a great extent mutually exclusive. You can either build a lightweight, very economical to operate car that’s more vulnerable to the physics of an impact – or you can build a car that insulates the occupants from these forces, but at the cost of building it heavier and so less economical to operate. 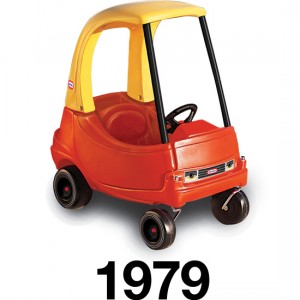 There’s really no way around this. Or rather, no way to get both things  in the same car. At least, not at a price point within the range of economic reason.

But the government continues to insist on both things anyhow.

It has gotten “safety” – because new cars are much more sturdily built than the cars of the past. No question, a car like the Smart car would do better – that is, its occupants would fare better – in a crash than our friends’ old Morris. 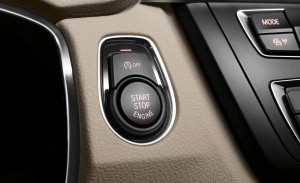 But modern cars are all much heavier than the Morris – and thus, thirstier – as a result.  To get the mileage demanded by Uncle, the automakers have turned to technology – including (latest thing) a system that shuts off the engine when the car’s not moving, just like a hybrid. I recently tested a new BMW 3 series – a luxury-sport sedan – that had this feature. I expect to see this sort of equipment become standard equipment in more and more new cars, including even basic transportation cars. Only they’ll be increasingly less basic in terms of their sticker price – as well as the cost to maintain/repair them as they age.

Meanwhile, there’s our friends’ little Morris. It gets about the same gas mileage knocking around town as a new Prius hybrid. But the Morris only cost our friends $3,000 – the cost of a few options in a new Prius, which starts at $24,000.

And mind: The Morris is capable of 40-50 MPG with 1970s-era (1960s-era, actually)  technology. It does not have an overdrive transmission, like all modern cars.  It has a carburetor – controlled by a pull-cable attached to the gas pedal. Not direct gas-injection and drive-by-wire. I’d love to see what a car like the Morris could do, MPG-wise, with a few well-chosen updates. Maybe goose the performance of the engine a little to make the car highway viable. Fit it with a throttle body fuel-injection system (much more efficient than a carburetor but still simple and inexpensive and doesn’t require a computer-controlled engine) and an overdrive transmission. None of these things would add appreciably to the curb weight of the Morris – but would probably result in 50-plus MPG, average – which would be 15 MPG better than the 2016 “Obama car.”

And a helluva lot less hassle, too.