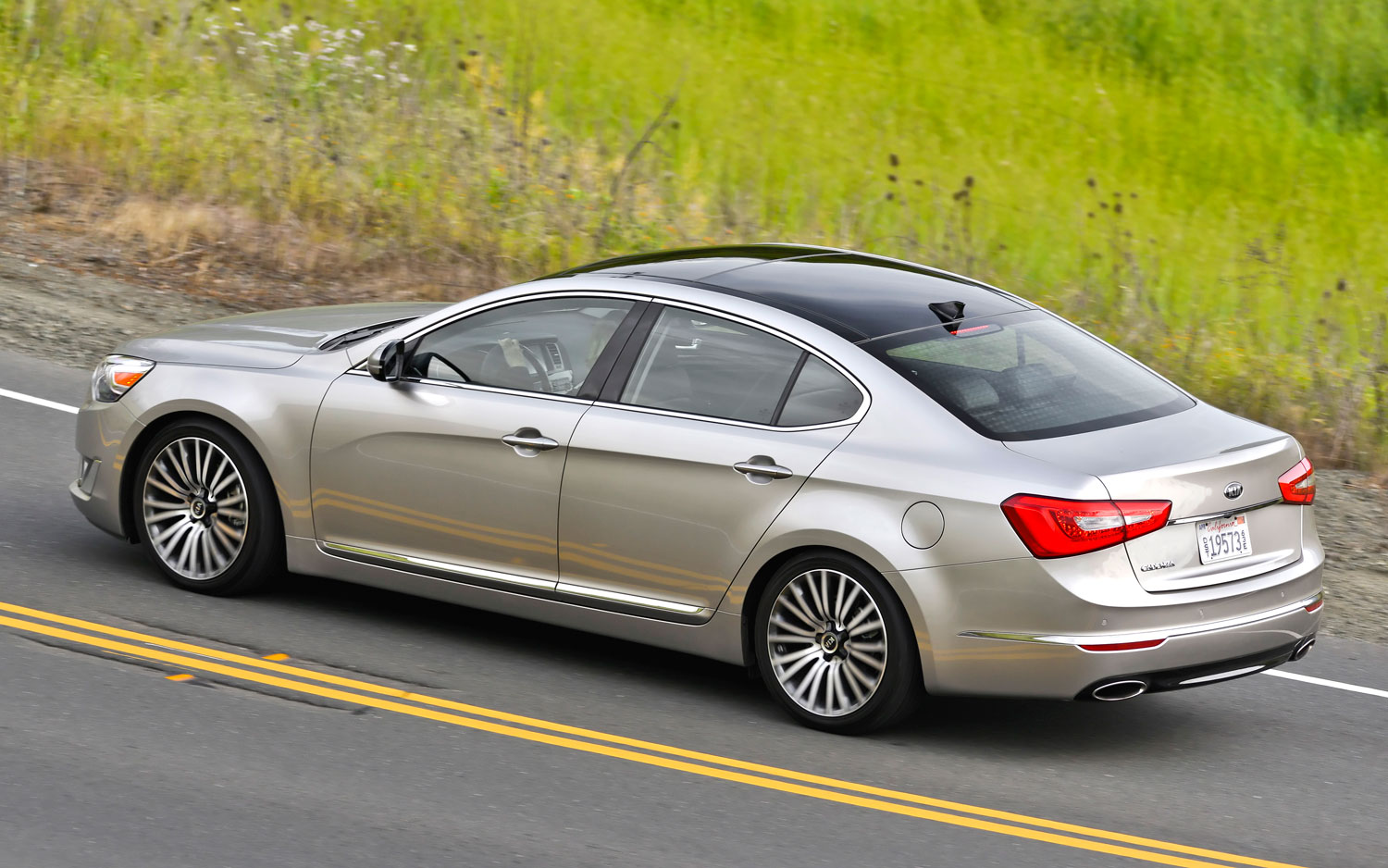 The Kia Cadenza and Hyundai Azera are fraternal rather than identical twins. They both spring from the same corporate loins (Kia is a subsidiary of Korean mega-conglomerate Hyundai) and both share a lot of “DNA” – including identical powertrains. 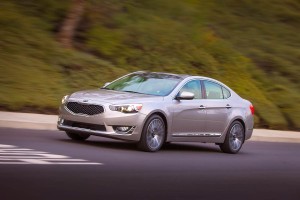 But, there are significant functional as well as cosmetic differences between these two that give each car its own distinct personality – and appeal. In this respect, the Cadenza and the Azera remind me of the ’70s-era Chevy Camaros and Pontiac Firebirds I have a thing for.

They were related, too. 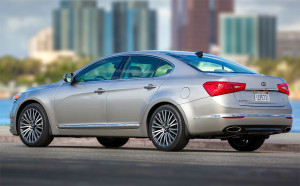 The Cadenza is a full-size, entry-luxury sedan from Kia.

It is actually a bit more full-size than its corporate cousin, the Hyundai Azera – being about two inches longer overall (though the same size inside). The Cadenza is also a bit more luxurious – and a bit sportier in looks and feel.

Kia – like Hyundai – has positioned the Cadenza to, on the one hand, undermine established luxury brands like BMW, Audi, Lexus and Mercedes – which charge about the same money for their smaller (mid-sized and even compact-sized) entry-luxury sedans – while tempting would-be buyers of Toyota Avalons and Chevy Impalas, which are also full-sized cars with reasonable price tags – but which aren’t quite as swanky – or as sporty – as the Cadenza and Azera. 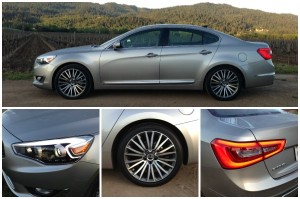 Like the Azera, the Cadenza is a lot of car – literally – for the money. Full-sized luxury for about what you’d pay to get into a base trim  – and mid-sized or even compact-sized – brand-name luxury car.

Non-fussy controls – a welcome (and rare) treat in a luxury car.

Slightly sportier handling feel than Azera (the result of tweaks to the suspension; more on this below). 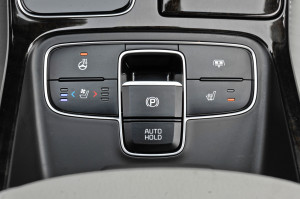 Some desirable features are only available in the Azera – and vice versa.

No engine options. V-6 is powerful – but thirsty.

Like the Azera, the Cadenza comes standard with a 3.3 liter, 293 hp V-6 with direct injection (GDI) and variable valve timing. A six-speed automatic with manual shift mode sends the power to the front wheels. 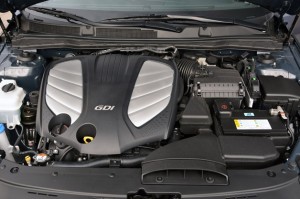 Because the Cadenza is so new, official EPA stats were not available when this review was written in early November, 2013. Kia estimates 19 city, 28 highway – just a wee bit less than the Hyundai Azera’s 20 city, 29 highway EPA rating.

Why the disparity, given identical drivetrains? It probably has to do with the fact that the Cadenza – being a slightly larger car – is also a slightly heavier car: 3,668 lbs. vs. 3,605 for the Hyundai.

The Cadenza’s gas mileage isn’t bad for a full-sized car with a near-300 hp engine under its hood. Indeed, compared with name-brand luxury cars – several of which are smaller cars – it is pretty good.

As a for-instance, a Mercedes E-Class sedan – which starts at $51,905 and which is a less roomy on the inside car than the Cadenza – only manages 20 city, 30 highway with its standard gas V-6. 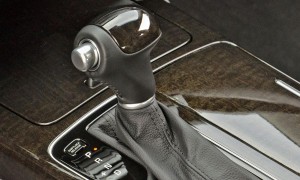 Kia does fit the Cadenza with a driver-selectable “Active Eco” mode (there’s a button on the dash to the left of the steering wheel) that when activated is supposed to optimize the fuel economy potential of the car’s drivetrain by such artifices as having the transmission shift into overdrive as soon as possible – provided your right foot doesn’t over-ride this. 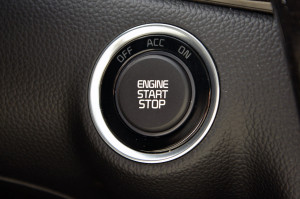 The problem is a nearly 300 hp V-6 is inherently thirsty, Active Eco engaged or not. BMW has done great things with turbo fours that deliver the on-demand power of a larger V-6 but with much better mileage (34 highway in the 5 Series; 36 MPG in the 3 Series) the rest of the time. BMW, of course, also offers hybrid and diesel options in these models.

I think it’s a good bet that next year – that is, model year 2015 – either Hyundai or Kia (and maybe both) will address this deficit by slotting a hybrid powertrain option into the Cadenza/Azera lineup. Kia already offers a hybrid version of the big-selling Optima sedan that touts a very impressive 36 city, 40 highway rating wrapped up in that extremely attractive bodywork.

The same ought to be applied to this also-handsome car – and the sooner, the better. 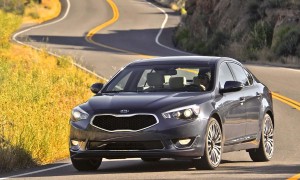 There are some differences, suspension-wise, between the Cadenza and the Azera that manifest in slightly different road feel. Both cars ride on the same 112 inch wheelbase, but the Cadenza’s track (the distance, side to side, between each pair of wheels) is slightly less than the Azera’s: 63 inches (front and rear) for the Cadenza vs. 63.2 (front) and 63.3 (rear) for the Azera.

The Azera’s wider track – and probably, some other tuning factors such as spring rates and so on – endows the Hyundai with a somewhat more luxurious (that is, softer/plusher) ride while the Cadenza feels a tad sportier (see here for my road test of the Azera).

Part of this may be due to the Cadenza’s electric-assist power steering – which you can adjust for more effort and feedback just by pushing a button. But it may also be a function of the not-as-wide-track. Both cars come standard with 18 inch wheels – and can be ordered with a more aggressive 19 inch wheel/tire package, which with the Cadenza also gets you adaptive cruise control (not yet available with the Azera) and water-repellent glass. 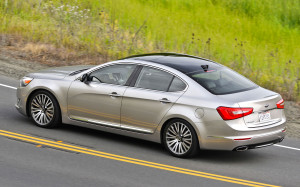 Even with the optional 19 inch rims (the tested Cadenza had ’em) neither the ride nor the handling is BMW-sporty. But it’s a bit sportier than the Avalon (and also the Chevy Impala) and that’s probably the sweet spot Kia was aiming for.

The V-6 is what it ought to be in a car of this type – unobtrusive. You push the accelerator and the car accelerates. Not brutally, but authoritatively. It’s not a high-RPM puller like the BMW 3 and 5’s turbo fours – but that’s not what Kia (and Hyundai) were aiming for. People who buy big cruisers – and that’s really what both these cars are, despite the nominally sportier appearance/handling of the Cadenza – like a car that sort of flows forward. That’s calm and quiet and doesn’t jump or jostle – yet gets the car up to speed without apparent effort (much less struggle).

Exciting, it isn’t. But that’s precisely the point. 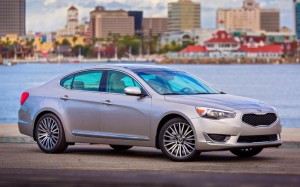 The Camaro-Firebird thing comes to mind again – with the Cadenza being more like the Firebird was relative to the Camaro, back in the day. The ‘Bird was always the more aggressive-looking car, but aggressively elegant – if that makes any sense. Same here. The Kia’s side glass is more fluid and rounded (especially the rear quarter glass, which tapers to a point in the Azera but is more gently elliptical in the Cadenza). The Cadenza’s “hungry W” grille is wider opening, with a lattice-mesh insert – and no badge at all. It looks meaner than the Azera’s  more pacific tapered, downward “v” grille. The Cadenza’s twin projector beam “eyes” seem fiercer, too. 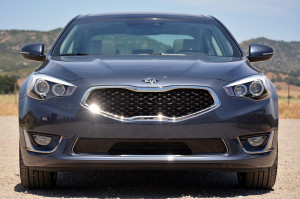 Both cars have scalloped side panels and Lexus-esque lower sills with a chrome accent strip. The Hyundai’s Jaguar- style thin-line, full-width tail-lights and twin exhaust tips molded into the lower valance panel look prettier to me than the Cadenza’s almost VW Jetta-ish separate tail-lamps and blockier/heavier-looking lower panel. But rest-of-the-car-wise, I prefer the Cadenza’s aesthetics. It has more visual verve – like the Optima does relative to the Sonata. 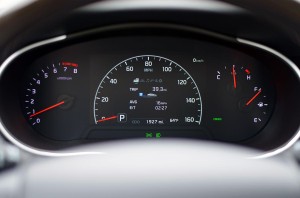 Same goes for the inside.

The Kia comes with an LCD digital dash; the Hyundai has a more conventional set of analog gauges. Echoes of the Firebird vs. Camaro, the KIa has a more breadboxy shaped dash while the Hyundai’s is more cockpit-style. One of the obvious layout (and functional) differences between the two is the Azera’s over-sized central control knob for the audio system and other functions vs. the Kia’s array of smaller individual buttons. This is a subjective ergonomic toss-up. Neither approach is necessarily better; it depends on your preference. 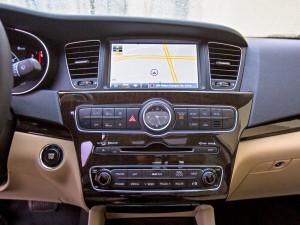 I like the Cadenza’s old-school analog-style clock. I don’t like that Kia elected not to emulate Hyundai – and have the controls for the driver’s and front passenger’s power seats mounted up high on the door panels, Mercedes-style –  where they are easy to see and access.

Both cars have identical front and rear seat legroom, but the Kia has slightly less front seat headroom (40 inches vs. 40.3 for the Azera. Surprisingly, rear seat headroom in the Cadenza is slightly better (37.8 inches vs. 37.6 in the Hyundai). It’s not a big enough difference to notice – just interesting to note how slightly different rooflines affect interior space. 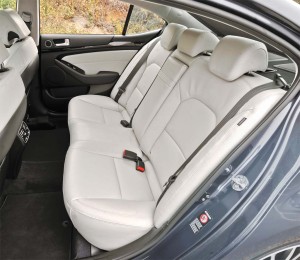 What is noticeable – and weird – is that the smaller overall Azera has a bigger trunk: 16.3 cubic feet vs. 15.9 for the Cadenza. Turns out the extra couple inches of car (the Cadenza is 195.5 inches long overall vs. 193.3 for the Azera) doesn’t translate into more trunk or interior space.

But how does the Azera compare to its immediate competitors?

But, the Cadenza and its Hyundai sibling are still very roomy cars – especially relative to the entry luxury name-brand stuff. The new (and compact-sized) Benz CLA, for instance, has only 27.1 inches of second row legroom. That’s almost a foot less than in either the Cadenza or the Azera. The mid-sized (and $51k to start) Benz E only gives you 35.8 inches of second row legroom. To get more second row legroom in a Benz (or BMW or most other name-brand luxury stuff) you pretty much have to ascend the food chain to their top-of-the-line full-size models. And these typically carry base prices that would buy two Cadenzas. 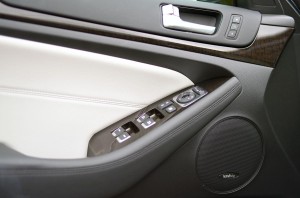 THE REST
In addition to its sportier (overall) looks, the Cadenza also offers some goods its Hyundai stablemate either doesn’t – or which cost extra. The Kia comes standard with 10-way power seats, for example. The Azera’s standard seats are eight-way. You also get a standard heated and ventilated driver’s seat in the Cadenza. Adaptive cruise control is also available. It’s not offered – even optionally – in the Azera (not yet). You can also tack on a Lane Departure Warning system and rain-repellent glass, both included as part of the Technology Package. The Azera doesn’t offer this equipment, either – not yet, anyway. 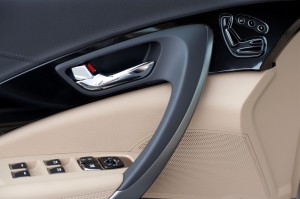 This may be frustrating to some buyers – for example, those who prefer the looks (and slightly sportier driving characteristics) of the Cadenza, but want Azera-only features like the beverage cooler and prefer the ergonomics of the Hyundai’s seat controls and all-in-one center stack controls. Back in the day, GM pulled this trick, too. The Pontiac Firebird could be ordered with four-wheel-disc brakes and 15×8 aluminum wheels; the ’70-81 Chevy Camaro never offered factory four-wheel-disc brakes or 15×8 wheels. 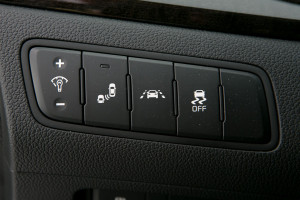 The Cadenza’s Lane Departure Warning system is a hassle.

In theory, it is supposed to alert addled drivers who have failed to notice they’re wandering off the road – or across the double yellow. The system can “see” painted lines – and if you get too close, a warning tone will sound to rouse you from your torpor in time (hopefully) to avoid running off the road. The problem is it also sounds when you cross lanes to pass – and so on. That gets annoying. Also that you must turn the system off every time you go for a drive.

Luckily, it’s not standard equipment – and so can be avoided.

I’m also not a big fan of adaptive cruise control – the concept of it, not this particular system – which works exactly as it should. It automatically brakes if traffic up ahead slows, then resumes your pre-set speed – again, automatically. The issue I have with that is it arguably encourages people to not pay attention to their driving – because they count on the car to do the driving for them. Adaptive cruise control (and automatic collision avoidance systems) are forms of idiot-proofing that try to end-run the underlying problem of people who’d rather text or daydream than focus on controlling their car. 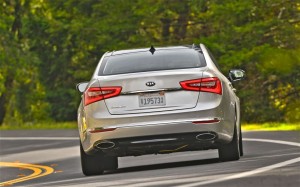 THE BOTTOM LINE
You’ll want to cross shop both the Cadenza and the Azera before settling on which one’s right for you. As with the old Camaro and Firebird, they’re not badge-engineered replicants. The Cadenza will probably appeal a bit more to the would-be BMW/Audi/Lexus buyer – while the Azera is a car that will almost certainly pull in a bushel (and then) some of would-be Avalon and Impala prospects.