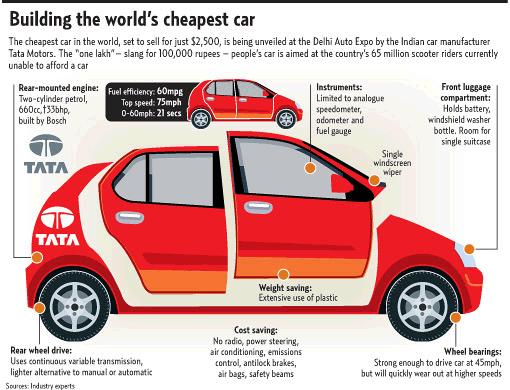 In this economy, can anyone seriously doubt that there is a market for simple, reliable – and inexpensive – transportation? 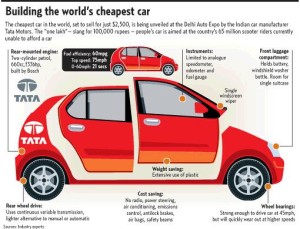 In any case, why not let the market operate? Why not allow (god, how I hate that term) Tata or Cherry (or whomever) to offer their basic, low-cost cars for sale here – and see whether people are interested?

You and I know why this will not be allowed, of course. Precisely because people would buy such cars – and that would impose pressure on the industry at large to simplify their offerings, too – and reduce the cost.

It is critical to keep people perpetually in debt. Why allow them to buy a new $6,000 car outright – or pay it off in two or three years (as was common once – and within living memory of any person older than 40) when you can effectively force them to buy a $30,000 car (the average price paid for a new vehicle as of last year) and sign them up for 5 or 6 years of payments? And force them to spend $1,000 annually to insure it, too?

That’s the truth of the thing.

It’s not about “safety” – or any other such altruistic palaver.

It is about power – control.

And, of course, money.

I’ve written about air bags before. Classic example, so worth repeating. They were first put on the market – in the early-mid 1970s by both GM and Chrysler – as optional equipment that people could buy. Or not.

Most people chose not to buy.

Not because they were cavalier risk junkies – as people such as myself are often characterized by the Air Bag Nazis. But simply because the cost of the air bags was prohibitive. They added as much to the bottom line price of a car (this is back in the ’70s) as air conditioning did – and AC was just about the most expensive option you could buy in those days.

So, they failed in the marketplace. Which is why the car companies worked with the government to see them made mandatory. Now you cannot say no to air bags. And to many other “features” you may not want in a car. These features are not  necessarily bad. The question is – or ought to be: Can you afford them? Many people cannot. Hence the now-common six-year payment plan. Soon – count on it – to be expanded to seven years. 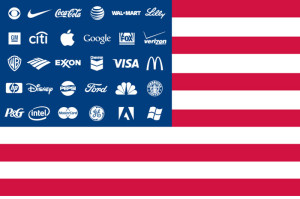 Government – the people who run it – have this blind spot about economics. Because for them, economic laws don’t apply. Cost-benefit considerations that normal people must entertain are, at most, abstractions for those who wield political power. That is, people who wield organized violence.

Thus, Obama (or whomever; the particular personage of the Dear Leader at any given moment is incidental)  can simply decree that – for example – all new cars will be able to withstand a rear-impact by a car traveling 40 MPH or be able to barrel roll a dozen times and not have the roof crush, or average 35.5 MPG. Let the engineers figure it out.

And let you and me pay for it.

The giant cartels that produce cars are just as bad. They want money as much as the government wants power. Which is why they now anticipate the next new government mandate – or even trot out “new ideas” (examples include Volvo and its hood air bags – ostensibly to “keep pedestrians safe” – and the current trend, cars that stop themselves automatically) and practically beg the government to make them mandatory. 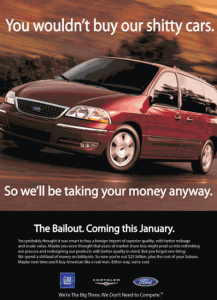 This serves two purposes. It makes them money – and it makes it more and more expensive and thus harder and harder for anyone else to break into the car business. This curtails competition – and encourages consolidation, which leads to even greater degrees of cartelization. This trend – the disappearance of smaller brands or their absorption by the handful  of big Kahunas. . . the ever-greater degree of homogeneity . .  is obvious to even casual observers. Cost goes up – and choice (real choice, as in something actually different in a meaningful, functional way) diminishes.

But, by what right do they burden us with these costs – or limit our choices? Why should allegedly “free” people not be free both to choose whatever type of car meets their needs – and budget?

It is an outrage that we’re not “allowed” to choose. That we do not have the option to buy a $3,000 Tata that might be just the ticket for in-city A to B driving. Or a Mahindra compact diesel truck. Or a Land Rover Defender 4×4 without air bags, or much in the way of power anything. 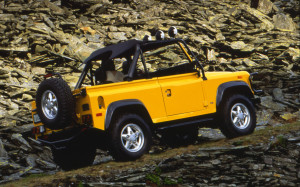 The problem is most people are not outraged about this. They don’t seem to mind being told what they’ll buy – nor how much they’ll pay for it. They’d probably be annoyed if their next door neighbor marched over one day and told them they had to drive this type of car – and weren’t going to be allowed to drive that type of car. Their first reaction would be open-mouthed bewilderment. Their second reaction would be: Who the hell do you think you are? And then: Get the hell off my property – and mind your own business.

And yet, most people will accept the same damn thing when it’s done at once or twice remove, by “regulation” and in a city, far, far away.

It’s bizarre, when you think about. 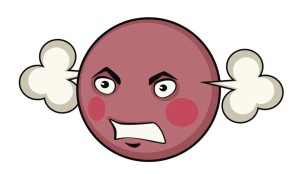 An example of cognitive dissonance – and what we Libertarians call (among ourselves) the myth of authority. It is the idea that it’s ok for some people (or some groups of people) to dictate to other people (and groups of people) what they can and cannot do.

Now, to be clear, we’re not saying people ought to be able to do anything they want to. The line in the sand is “so long as you don’t cause harm.” Otherwise, yes, each of us has an absolute right to do exactly as we please – without someone else telling us (and threatening us) that we cannot do it.

That includes buying whatever car we’d like to buy – equipped as we’d like it to be equipped. The idea that some other person – whether individually or claiming to represent the Great Collective – has the right to interpose, to dictate to us what we’ll buy and how much we’ll pay is something earlier generations would never have taken lying down.

I see no reason why we ought to take it, either.