Be grateful she wasn’t raped by my officers he says; and with that we get a glimpse at the true nature of the copfuk.  There is no accountability, they are nothing more than the blunt instrument of our owners, other than the few remaining peace officers they not only do not deserve respect or praise, they should be publicly humiliated, ostracized and accurately labeled as thugs and gangsters.

The Art Acevedo Defense: At Least My Minions Didn’t Rape Her 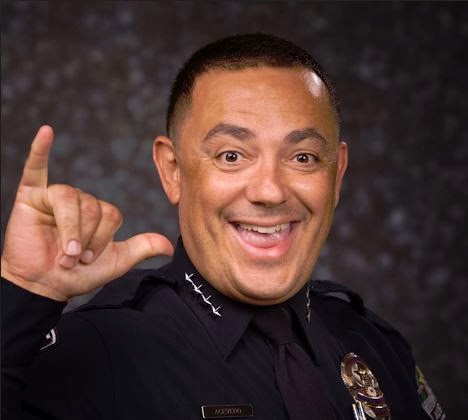 Chief Art Acedevo of the Austin Police Department is like a figure from Roman history – in one of the worst ways imaginable. To be specific, his view of the privileges of the coercive elite, and the deferential gratitude they’re supposedly owed by the plebian class, summon memories of Cicero’s description of the aspiring ruler Marcus Antonius. In fact, Acevedo’s dismissive comments about the unjustified arrest and abuse of a female jogger displayed a tyrannical insouciance that Antonius might have considered a bit excessive.

After Cicero delivered the first of fourteen philippicsagainst Antonius in the Senate, the general invited public applause for the forbearance he displayed by allowing the orator to live. Cicero devoted a lengthy section of his second philippic to demolishing the would-be dictator’s pretense of magnanimity:

“That, senators, is what a favor from gangsters amounts to – they refrain from murdering someone, and then they boast of their kindness…. What sort of kindness is it, to have abstained from committing a horrible evil? To me, it doesn’t appear so much a favor as a burden, to know that it was within your power to do such a thing with impunity. But I grant that it was a favor, such no greater kindness can be expected from a robber.”

Like every other notable municipal police chief, Acevedo presides over a department that is notorious for committing acts of capricious violence against innocent people –and almost without exception he defends such crimes as suitable exercises of discretion by the punitive caste.

Women tend to be preferred targets in the ongoing APD crime wave. One suitable example was the case of Vanessa Price, who was unlawfully “detained” outside her home by Officer Jermaine Hopkins, and then brutally assaulted by him after she used her cell phone to call her husband for help. Hopkins then charged the victim – who had been observing a police encounter with an unruly house guest from a distance of roughly thirty feet — with “interference” and “resisting arrest.” The charges were dropped, and Hopkins – rather than being prosecuted for aggravated armed assault – was given a trivial suspension. Mrs. Price had to endure two months of expensive physical therapy to recover from the unprovoked attack.

Insisting that his conduct was exemplary, Hopkins appealed his suspension. He had the support of the local police union, the Austin Police Association. Sgt. Wayne Vincent, the APA’s spokesliar, insisted that Mrs. Price’s refusal to put down the phone constituted an impermissible threat to the “safety of the officer,” before which all considerations must yield.

Viewed in the context of the Austin PD’s established standards, the actions of the officers who assaulted and abducted jogger Amanda Jo Stephen as summary punishment for “contempt of cop” were comparatively mild. This is an indictment of the state-licensed gang over which Acedevo presides, not an endorsement of the behavior of this specific group of costumed kidnappers.

Blogger Chris Quintero, who captured the abduction on video, reports that the female victim had been jogging when members of the local slave patrol detained her and demanded that she present a “pass” from her master. The officers were carrying out a tax-farming operation at a busy intersection to mulct students for the supposed offense of “jaywalking,” and were feasting heartily on their victims when Stephen – who was listening to music while exercising — happened by.

When one of the officers laid hands on Stephen, the young woman — not knowing that corpulent stranger was a cop — jerked her arm away. After Stephen, who wasn’t operating a motor vehicle and wasn’t under arrest, refused to give her name, her captors illegally arrested her for the supposed offense of “failure to identify.” She was then shackled and hauled off screaming by a phalanx of well-nourished tax-feeders.

The public reaction to this crime was sufficiently vehement to provoke an effort at damage control by Acevedo, who used that opportunity to put on a display of contemptuous hostility toward the offended public. Indulging in the kind of stilted sarcasm we would expect from a spoiled adolescent, Acevedo suggested that Stephen should be abjectly grateful that she was spared being raped or killed by her uniformed betters:

“Thank you, Lord, that it’s a controversy in Austin Texas that we had the audacity to touch somebody by the arm and tell them, `Oh, my goodness, Austin Police – we’re trying to get your attention.’ In other cities, cops are actually committing sexual assaults on duty.”

Of course, if a Mundane “had the audacity to touch” a cop on the arm, this act of desecration would be described as “aggravated assault on an officer,” and the offender would most likely be tasered and beaten bloody. In this case, from Acedevo’s perspective, the female Mundane committed a crime when she shrugged off a physical advance from a member of the exalted brotherhood of official coercion: “Quite frankly, she wasn’t charged with resisting and she’s lucky I wasn’t the arresting officer because I wouldn’t have been as generous.”

A very similar view was expressed by Officer Adam Skweres of the Pittsburgh Police Department, a serial predator who was arrested and prosecuted for sexually assaulting a woman in her home. Skweres, who had attempted to violate at least three other victims, told one of them that if she put up a struggle, he could arrest her for “resisting.” That point of view isn’t limited to obvious sociopaths like Skweres. During oral arguments before the Michigan supreme court in October 2011, Gregory J. Babbitt, an assistant DA for Michigan’s Ottawa County, acknowledged that a woman who fought off a sexual assault committed by a state-privileged attacker could be prosecuted under the state’s “resisting and obstructing” statute.

Magdalena Mol, a young wife and mother, was detained without cause in the incongruously named village of Justice, Illinois on the night of May 5, 2012 by Officer Carmen Scardine.

At the time, Mol was waiting for a taxi to take her home after visiting a friend.

Scardine invited her into his car and demanded identification. When the cab arrived, the officer ordered the driver to leave. Scardine then drove Mol to a secluded spot and raped her. The assailant didn’t charge Mol with an offense – a gesture Chief Acevedo would probably treat as an act of regal generosity.

Acevedo was eventually compelled to issue an apology for his remarks, which he described as a “poor analogy.” In fact, Acevedo committed a “gaffe,” as that term was defined by Michael Kinsley – that is, the unwitting disclosure of an uncomfortable truth by a public official. Acevedo’s apology most likely reflected his regret for offending his comrades, rather than any remorse for mocking Amanda Jo Stephen and the outraged public.

Writing of the era in which Rome succumbed to undisguised tyranny, historian Edward Gibbon observed: “A nation of slaves is always prepared to applaud the clemency of their master who, in the abuse of absolute power, does not proceed to the last extremes of injustice and oppression.”

Strangely enough, that was the same message Chief Acevedo sent, even if it wasn’t the one he had intended. If it were received and properly understood, Acevedo not only would lose his job, he would be run out of town – unless the population he addressed is worthy of the contempt he expressed.

Article reprinted with the permission of the author Will Grigg, more can be found on his blog http://freedominourtime.blogspot.com/.