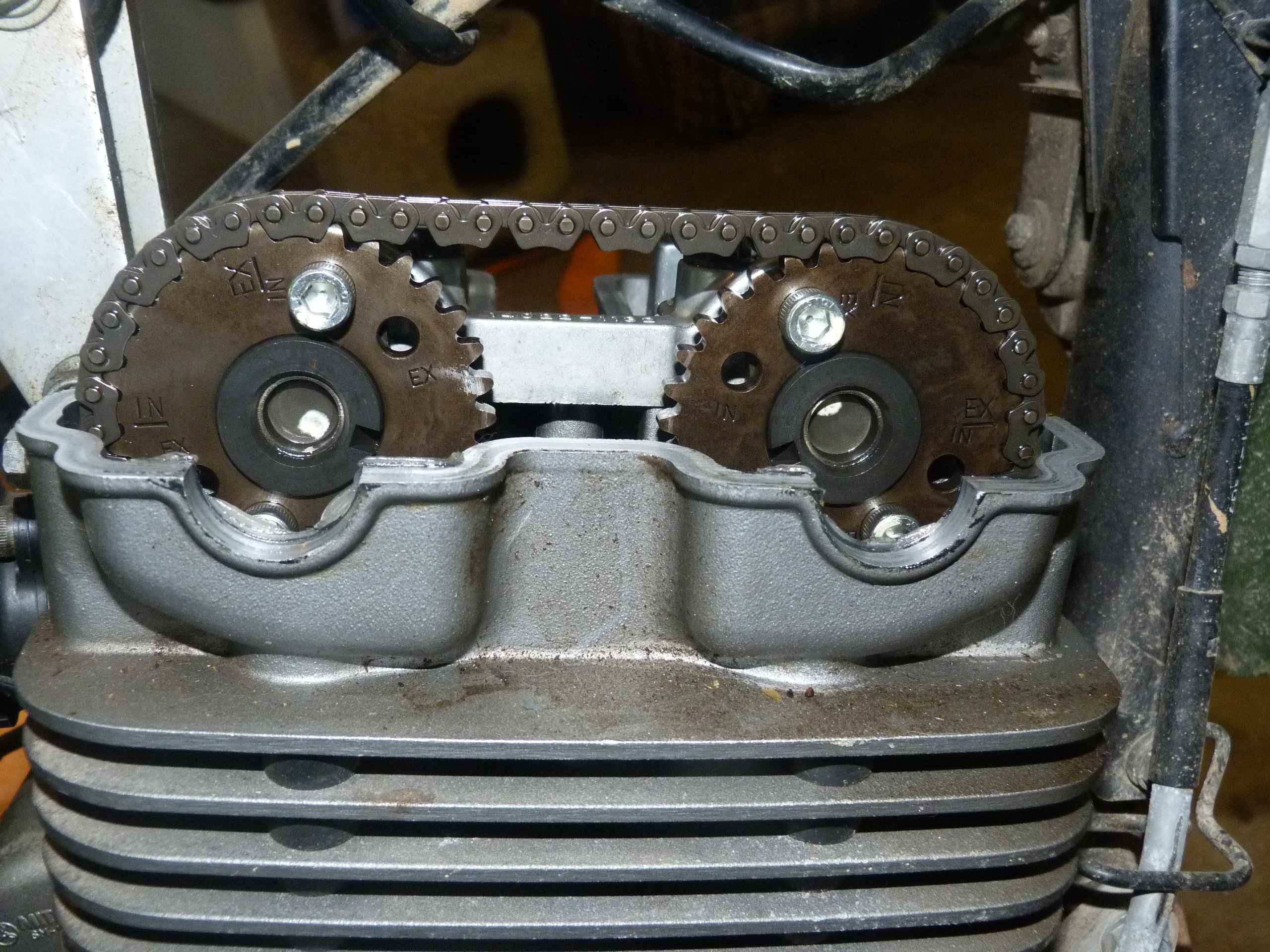 Last week, I posted an article about my 2000 Kawasaki KL250 Super Sherpa. It’s a fun little dual-sport that was jetted lean from the factory to keep Uncle off of Kawasaki’s back. Result? A sometimes frustratingly hard-starting bike. 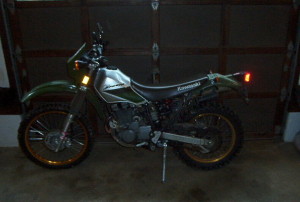 Hard on the battery, too. (This bike hasn’t got a kick-starter.)

Fuel injection has fixed this issue with new bikes – but if you have an older model like my Sherpa, the only fix for the Hard Startin’ Blues (excepting ether) is to re-jet the carb.

The new jets – number 20 pilot and 32.5 main – arrived the other day. I had already cleaned the Sherpa’s carb – and bought four hex-head screws to replace the chewed up factory screws for the float bowl housing. It was a quick 5 minutes’ work to put the new jets in and button the carb up. It takes a little longer to reinstall the carb on the engine. Not because of the cables and hoses – they’re easy. But getting the snorkel that connects the carb to the air box back on takes some time.

You could install the snorkel on the air box first – and then install the carb. But the clearance in that case is super tight. I find it’s easier to first install the air box (if it was removed from the bike), then install the carb onto the engine, then work the snorkel into place. If it is still pliable, this is not too hard to do. Bend it in the middle, squeeze it in between the two connect points. The end that goes into the air box is pretty easy as it’s slip-on. The other end – that connects to the carb – is a bit tricker. You’ll have to work it around the carb throat.

If the snorkel is not pliable, you can make it pliable by briefly immersing it in hot water on the stovetop.

Be sure the little positioning notches are lined up correctly, then tighten the clamps. Check your push-pull cables and be sure the choke cable is re-installed correctly and adjusted properly. 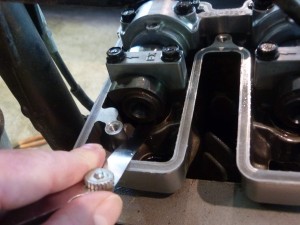 While I had the tank off, I decided to check the valve clearance. My bike only has 4,300 miles on it – and the owner’s manual says a check is only needed once every 7,500 miles – but given the bike’s 14 years old and given I was already in its guts, I figured – why not? It turned out to be a good move as the exhaust valves were a little tight. The minimum specified clearance is .006 in – and mine were just slightly tighter than that. I could have left them, but I wanted the bike to be right.

Checking is easy. Adjusting a bit less so.

First, be sure the bike is dead cold. Next, remove the cam cover. Three bolts hold it in place. Set it aside. 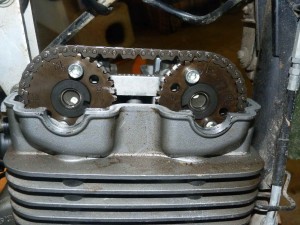 Next remove the two slotted covers located on the lower left-side engine case. The smaller upper one hides the timing mark/notch; the lower one, the 17 mm bolt you’ll attach a socket to in order to manually rotate the engine to line up the notches at top dead center (TDC). You want both cams – intake and exhaust – on their base circle. Nose (“pointy” end) not pushing down on the valve. An easy way to confirm that the piston is at TDC is to remove the spark plug and – as you rotate the engine manually – watch the piston come up. When it has reached the top of its travel, you should be at – or very near – TDC. If the timing mark in the inspection hole also lines up, you should be good to go.

A third way to confirm is to check the timing marks on the camshaft sprockets. When the piston is at TDC, the intake cam’s underlined “IN” mark should be lined up almost exactly with the left edge of the cylinder head casting, as in the picture above.  The exhaust cam’s underlined “EX” mark should be similarly lined up with the right edge of the cylinder head casting.

If all is kopacetic – double check, if you’re unsure – you can now check the clearances using a feeler gauge. The clearance range for the intake valves is .004-.007 inches and .006-.009 for the exhaust. If they fall within this range, you’re done. Reinstall the cam cover, the two slotted covers – and motor on.

If any of the valves are tight, brace yourself. To get at the shims you’re gonna have to remove the cams. It’s not a hard job – just annoying that it’s necessary to do it. Usually, it’s possible to shim a bike – remove/install larger or smaller shims to get to the specified clearance – without disassembling the valvetrain.

First step, take the tension off the cam tensioner – so that there will be slack enough on the cam sprockets to allow you to lift them up and out of the way. The tensioner is located on the right-hand side of the engine case, adjacent to the exhaust pipe. You’re gonna need to pull the exhaust pipe – the header – off, too. Otherwise, you won’t be able to remove the tensioner – which you’ll need to do in order to re-set it once you’ve finished shimming and have the cams re-installed.

The shims are located under the metal cups that the cam lobes push down on as they rotate. They’re also very slick – and not magnetic. With dry, clean hands, you can work them out of their bores. The baby aspirin-sized shim will be underneath. If the valve you’re working on is tight, you’ll want to go down to the next smallest shim (and so on) until you’re back within the specified clearance. You can buy a kit full o’ shims – but it’s cheaper to just buy ’em individually at your local bike shop.

Once clearance is back in spec, it’s time to reinstall the cams. You want everything lined up as in the pic above. I strongly recommend buying a copy of the Kawasaki KL250 shop manual (they’re available for about $50 on ebay) because it provides many small details I haven’t got space for here, as well as diagrams showing what you need to know. The book will also tell you how to re-install the cam tensioner once you’re ready to do that – and it’s very important to get that step right.

If it all looks right, put the covers, etc. back on and – fingers crossed – fire ‘er up!

The jetting change (and carb cleaning ad valve clearance adjustment) made a huge difference in the operating characteristics of my Sherpa. It now starts easily – even when cold – and does not take forever to warm up. It feels stronger, too. If you have one of these cold-natured bikes, I recommend doing what I did. The bike will be happier – and so will you!