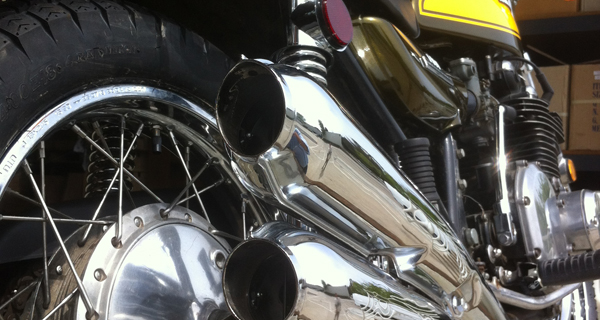 If you’re into naval history, you probably know the story – and the significance of – HMS Dreadnought. The first big gun battleship, launched in 1906. She mounted 12 inch guns in two main turrets – giving her massive firepower compared with her contemporaries, which were thus rendered immediately obsolete and thereafter referred to as “pre-dreadnoughts.” Dreadnought became synonymous with the big-gun battleships that came after her – all of which emulated her design. 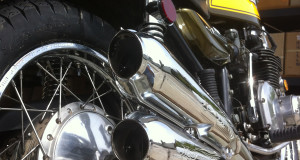 Kawasaki’s Z1 900 likewise changed everything when it was launched in 1973. It was the first mass-market superbike. Its 903 cc dual overhead cam four outclassed everything else on the road. It ran a 12 second quarter mile – and topped out close to 140 MPH. Today, that may not sound all that impressive. But in the early ’70s, it made you King of the Road.

The big Zed also kept you on the road – in contrast to Kawasaki’s quick but temperamental (and outrageously thirsty) two-stroke triples. It was reliable, maintenance-light (no oil to add or mix, just one set of points for its four cylinders as opposed to three sets for the triples, one for each cylinder)  and it ran about twice as far on the same quantity of gas.

Here was a machine that could be ridden cross country – and which could (and did) run for 100,000 miles before teardown time. This was unheard of. But Kawasaki over-built the Z1, with a massive crankshaft riding on roller bearings that was hard to hurt; geared rather than chain-driven primary drive and direct-actuation of the valvetrain (rather than via rocker arms, as in the single overhead cam Honda CB750). The engine’s strength was such that chain technology of the era could not keep up. Kawasaki tried to crutch this with an automatic oiler that made a mess more than anything else; luckily, chain technology quickly improved and the automatic oiler was no longer necessary and, accordingly, dropped in ’76. 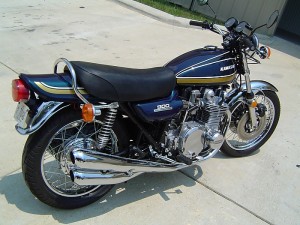 This year, the Z1900 became the Kz900 – but it’s the same bike where it counts. Same engine, same jaunty 4-4 pipes that play the “music” made by the big air-cooled four; at start-up, you can watch the individual exhaust pulses erupt in mechanical syncopation. The chief differences are plusses – a beefed-up frame, no more chain oiler. Revised front forks (the ’76 does not have reflectors built into the lowers, the Z1 does). Revised – slightly – side covers that sport more succinct “Kz900” badges rather than the “900 double overhead cams” of the ’73-’75.

My bike’s tank is painted in ’75 Z1900 colors – and stripes – which I prefer over the factory ’76 palette. Deep Kaw green with gold/white striping. The engine has been muscled up some, too. Big bore (and high-compression) pistons, so it’s now a 1015 cc’er. I nixed the stock air box – which in ’76 was made a bit more restrictive to stifle noise and placate the Feds – and fitted individual K&N pods to each of the carbs, which have also been jetted up to assure proper fuel flow to sate the increased appetite of the enlarged and toned-up engine. Now you can hear the thing breathe – as it ought to be. 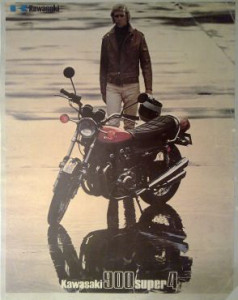 Otherwise, she’s stock – down to the NOS spoked rims, flat seat and single disc front/drum brake rear. It’s easy to update the latter with dual discs – a factory option in ’76 on the Kz900 LTD. Both fork lowers have mounting holes; it’s a 30 minute bolt-in job. But I like the uncluttered looks of the single disc set-up, even if the braking performance is both pitiful and uneven.

But otherwise, the old Zed feels remarkably modern for an almost 40-year-old machine. It starts easily and immediately – whether you use the electric starter or the kicker (these bikes have both). The engine idles smoothly and its power delivery is as smooth as Barry White. It’s as happy being short-shifted in traffic as it is being rung out to its 9,000-plus RPM redline on the open road. Quick and fast in stock trim, these bikes can be made very quick – and very fast – with a few modifications, as described above. But, be advised: The engine was far ahead of chassis (and brake) design, even in ’73. Wick it up to 120 or so hp – which is probably about what my bike’s engine now produces – and you can get in Too Deep  . . . Real Quick. You must constantly recite the mantra: This is a 40-year-old bike, sporting 40-year-old brakes and suspension technology… with an engine that pulls like current liter class bike’s.

Respect that – and you’ll be ok.

Sure, I could update the chassis. Some guys replace the stamped/tubular steel swing-arm with a modern aluminum unit from another (modern) sport bike – which lets you run a modern (wider) rim (and tire) among other advantages. And modern multi-piston calipers fore and aft. Good shocks (the stockers are crap) and modern (adjustable) forks. 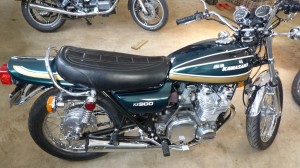 But, no. I won’t do that to my bike. Because this bike is my time machine. My antidote to an often-enervating modernity of implacable, incomprehensible computer-controlled everything. When I am riding the old Kaw, it is easy to feel the mid-’70s and not just reminisce about them. To get that vibe, to re-vivify that world and experience, once more, how good it was – despite the not-so-great brakes, et al.

Jimmy Carter’s benign ineptitude. Worship of the army (no “troops” back then) considered weird. Helmets – if you wanted ’em. Police in blue shirts with six-shooters, as opposed to black-clad goons packing Glocks and Sigs. Sure, the speed limit was 55 – but they didn’t put you in the ground for trivia such as “speeding.” You could get away with things. Not the Big Things (no one should favor that). I mean the petty – silly – technicalities. The stuff they crucify you for today.

Luckily, I can go for a ride down memory lane pretty much anytime.