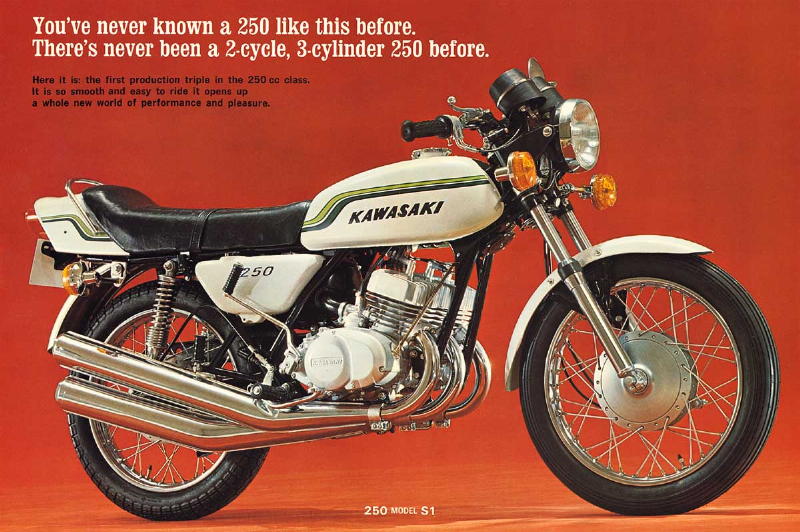 Weird little bikes are hard to find new. A bleak homogeneity has settled in. Small bikes are safe bikes; conventionally styled, with mild engines. Made, in brief, for beginners. To be thrown away once mastered and their owner moves on to something more interesting. 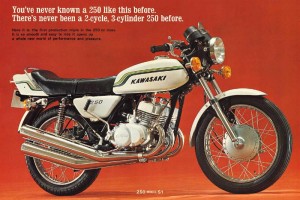 Kawasaki’s littlest triple – the S1 250 Mach I – was not like these modern milquetoasts. It was a savage bitch, with the same crackling and spitting and zing zing zinging! two-stroke oil-burner as its sister bikes, the scary H1500 (first factory mass produced bike to deliver a 12 second quarter mile back in 1969) and the even scarier H2 750, on which Hunter Thompson heard the song of the Sausage Creature.

The same sick powerband. Nothing below 3,000 RPM. You had to roll the thing out, feathering the clutch and throttle to keep from stalling it. What a dog, you’d think! Especially if you’re new to old triples and used to modern bikes, with their easy – their safe –  power delivery. But then the tach would clear 4,000 and – like the deadly snap of a copperhead you didn’t see in time – the little bastard would let loose with piston ported fury. If you weren’t ready for it, sliding off the bike’s flat seat was a definite risk, especially if the front wheel got air. And – though just a 250 – that S1 was fully capable of that. From about 4,000 RPM to about 8,000 RPM the thing became an M80 with a quarter-inch lit fuse. Not much time to think. Better do something right now. 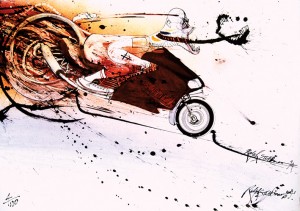 The S1 is among the few – and perhaps, the only – small CC street bikes capable of throttle wheelies. And the sound, the glorious sound.

There is nothing on this side of hell that sounds like an angry Kawasaki two-stroke triple. It spits, it crackles – each individual cylinder firing through its own individual pipe, two one side, one on the other. It’s a death organ concatenation of combustion. The Germans, in WWII, fitted the Stuka dive-bomber with a screaming siren intended to scare the crap out of the civilian populace in the crosshairs below, even before the bomb actually hit. The menacing sound of a Kawasaki triple – even a small one, like the S1 – achieves the same effect. With chambered pipes – as essential an accoutrement for a bike like this as a piss-and-vomit-and-blood-stained leather vest is for a member of the Hell’s Angels – this bike can be heard coming (and going) for miles. No Harley can match it, not even with four times the displacement.

It is not, however, an easy bike to ride. Which is as it ought to be – and was. 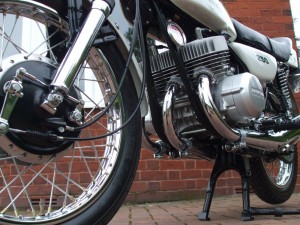 There is no electric starter. That’s for pussies and this is a man’s bike. Men kick-start their bikes. But first, the fuel must flow. Two strokes don’t have chokes per se. They have an enrichment  toggle on the left grip. Use your thumb to push it all the way to the right. Now, kick the sumbitch in the guts. If the points are set right and the plugs not fouled, a triple will usually light on the first or second try. Once it does, you must keep the revs up – to avoid fouling the plugs while feathering the enrichment toggle until the engine settles into a steady (for a triple) idle.

Now, point it where you intend to go and – using your feet, give ‘er a rolling start as you feed it power while gradually releasing the clutch. If you did it right, you’ll hear the song of the Sausage Creature, as Hunter did. 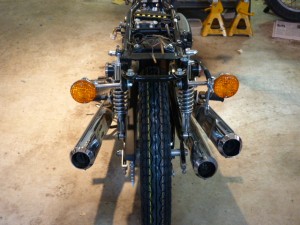 The five-speed box is Soviet and needs a firm touch. This is a bike you must work. No leaving it in third or fourth and letting the powerband carry you through. There is no powerband. There is a power spot – a slice of the rev range in which the full-throated banshee scream comes online. But you must keep the throttle fully open during the moment to keep things going. Kawasaki triples like wide open and not much in between.

Stopping the thing? The brakes – such as they are – are treacherous. Never trust them. The H2 (and the S3 400) at least got a single disc (solid) up front. The S1 got mechanical drum brakes on both ends. Grab a handful of fade and pray.

Luckily, the littlest triple did not have a deep-end-of-the-pool top speed. In good tune, tucked in, you might crest 100 MPH but 90 was more realistic. But getting there – and back – on the S1 feels as hairy as running a turbo-goosed Hayabusa up to 200 and back. It’s a full time and attention situation. Easy to go all kinds of wrong if you don’t. The tube-steel frame was heavy and prone to evil flexing; there were loose BBs in grease in lieu of proper bearings in races in the steering head. That plus pretty but easily (and often) out-of-round spoked rims made for sudden onset high-speed wobbles that could work themselves into unrecoverable tank slappers. They did not call these bikes widowmakers for nothing. 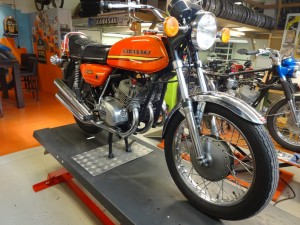 Like all the early Kaws – two-stroke and four – the triples (small and large) were two-wheeled analogs of the muscle cars of the same era. They were all about engine and attitude. Canned adrenaline, without the safety net of proper medical administration. You took a shot – and took your chances.

But – hot damn! (as Hunter would have put it) it was fun. 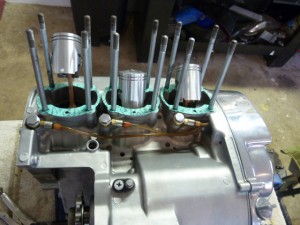 * Though the S1 looks (at a glance) to be the same bike as the H2 (albeit with a smaller engine) the frames and critical diminishes (such as wheelbase) are different. Parts – including engines – do interchange between the S1 and the S2 (350 cc) and S3 (400 cc) though those bikes also have subtle differences unique to each model.

* The S1 succeeded the Samurai, which was also a two-stroke-powered, but more conventionally styled. The S1’s waspish fuel tank (which held 3.2 gallons of fuel) and body-colored tail piece (very radical at the time, though completely common now) defined the new bike’s look.

* A well-tuned S1 with aftermarket chambered pipes was capable of high 14 second quarter miles, if ridden by someone who knew how to launch a triple correctly. 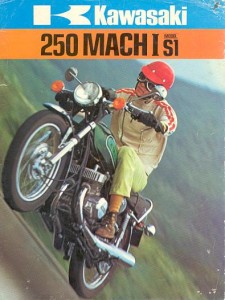 * Like the H1 and H2 (and S3 and S4) the S1 featured an automatic oil-injection system that eliminated the need to pre-mix oil with gas in the tank. An extra set of three plugs was carried in a special rack under the seat, in the event the ones in the engine became fouled.

Excerpted from Eric’s book-in-process on weird/cool/collectible old bikes; due out whenever he finishes it – and whenever he can find a publisher for it.