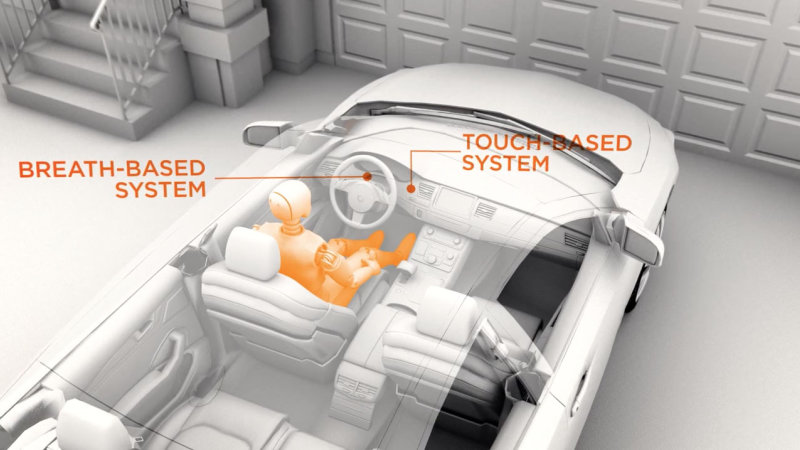 Drunk driving checkpoints presume you’re drunk until you demonstrate otherwise to the satisfaction of a cop.

In about five years – maybe sooner – your car may take over that job.

NHTSA – the federal agency that brought you shrapnel-spewing airbags you’re not allowed to say no to – has revealed its next decision-made-for-you in the name of “safety”:

In-car Breathalyzers… for everyone.

Not just people actually convicted of drunk driving, as is sometimes ordered by the court as a precondition for getting behind the wheel again. You know… as a consequence of their actually having done something to justify it.

For everyone – including people who never drink at all.

Well, for every new car.

By around 2020, if they sort the technology out.

Oh, they say it will be voluntary; merely an “available option.” If you buy that, I’d like to talk with you about some Florida real estate I have for sale… . When you hear them warble about “safety,” bet your bippie the next thing you hear will be mandatory. (See: seat belts, air bags, back-up cameras.)

And an ordinary Breathalyzer this isn’t. 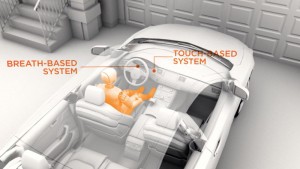 You wouldn’t have to blow into a machine. Just breathe. “Passive” air samplers built into the dashboard would do the trick. Or, merely touch the ignition button, steering wheel or gearshift lever. The Driver Alcohol Detection System For Safety – or DADSS (and no, I am not making this up; see here) will “passively sample” your body’s chemical composition using infrared spectroscopy to measure your blood alcohol content by reading the light reflected through blood vessels just below the skin.

If the system detects alcohol, the car won’t start.

All the major automakers are on board. Because there’s money to be made – in addition to control to be had.

One of the creepier aspects of DADDs (other than the bile-bubbling acronym) is that the “drunk” threshold could be adjusted – downward – and not by you. The professional termagants – male and female – at Mothers Against Drunk Driving (who are “partnered” with NHTSA on this project) have long been on record for zero tolerance as the ultimate goal. Any whiff of alcohol whatsoever would trigger the shutdown.

And they are drooling with eagerness to make it so. 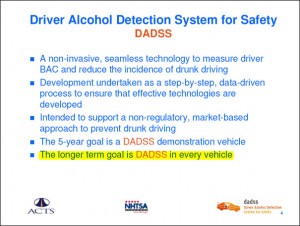 Conceivably, DADDs could narc you out in real time. Send a text to the nearest cop. Along with the make/model of your car, its tags – and where you are at the moment.

Your insurance company will be CC’d on all of this.

And once new cars are so rigged, what about old cars not so rigged? Will they be characterized as “unsafe”? Retrofitting required?

But isn’t all of this a good thing? Don’t we want “dangerous drunks” to not drive?

Twenty years ago, it was defined as having a BAC of .10 or higher. If you had a BAC of .08 in those days, you were not a “dangerous drunk” – legally speaking, at least – and free to go.

Today, of course, you are a “dangerous drunk” if you drive with a .08 BAC. And in many states, .06 BAC is sufficient to charge you with the offense. For teens, it is any blood-alcohol concentration whatever.

Are they “dangerous drunks”? Or victims of a latter-day witch hunt?

Also – need it be said? – technology is not infallible. Ask the people mauled by shrapnel-spewing air bags about this. Or the people charged by cops with “drunk” driving who were driving but as it turned out (many lawyer bills later) actually not “drunk.” Cops are not infallible, either.

Expect DADDs to err as well.

What if the driver is “designated” and imbibed nothing – but his three passengers are pickled? Will the dashboard sensors be sensitive enough to separate out the driver’s exhalations from those of his soused passengers? Will he have to prove to the cops – and the insurance mafia – that he wasn’t the one who’d been drinking?

How accurate are the skin-sampling spectrographic scanners? Presumably, less than 100 percent. And however many percent turns out to be the margin of error, the consequences of that will be on us – not the regulators (and “moms” over at MADD) who sicced DADDs on us.

So much for “if it saves even one life,” it’s worth it.

And what about this business of treating people as presumptively guilty of things – and requiring them to prove otherwise before being allowed to go about their business. Is it not – what did they used to call it? – unAmerican?

And, of course, forcing them to pay for the privilege.

DADDs is not going to be provided gratis, or via grants from Mothers Against Drunk Driving. Like air bags, like back-up cameras, whatever it costs to build DADDs into every new car will be added to the sticker price – plus a certain profit margin. This is why every major automaker is on board.

“Safety” can make you a lot of money.

This seems to be the new American Way.

Find some thing that’s (so they say) bad – something people might do. Then assume everyone does it and pass legislation requiring them to demonstrate that they’re not doing it, or imposing technology to “assist” or “help” them, for “safety.”

And make them pay for it.

It all began with drunk driving checkpoints. Drunk driving sensors in your next new car is the logical next step. Well, one of them.

There are so many things people might do; so many possibilities to preemptively act to keep them “safe.”

What a wonderful world they’re creating.