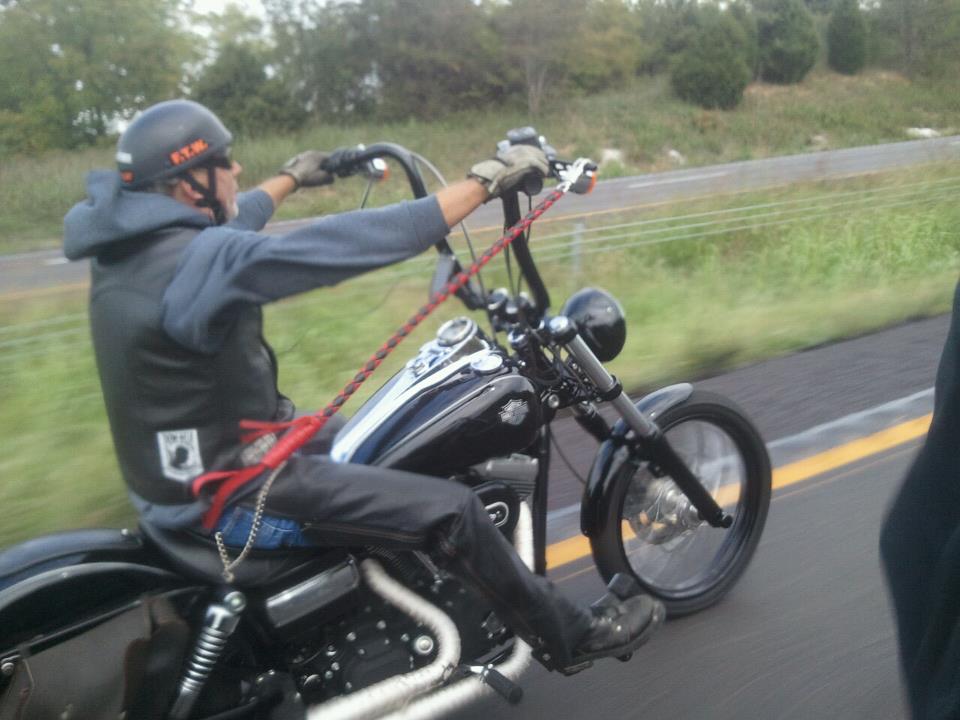 Now that the starter issue has been fixed, the regulator is billowing smoke – god knows why. It didn’t before. But mechanical issues are secondary only to electrical issues with this bike. The harness has been cut and spliced beyond fixing – all I could do was bypass the bad grounds, the sometimes-it-works starter solenoid circuit, with a pair of jumper cables. Positive connected directly to the nut on the solenoid and negative grounded on the bike’s frame.

That’ll start her. With a shot of ether, if it’s cold.

But let her run for more than a couple of minutes and ominous electrical smoke begins to huff out from the generator area (yeah, this bike has a generator… remember, it’s a Harley). So I shut her down and wonder and marvel… why anyone would find one of these carbuncled, always-leaking, never-quite-running-right (no matter what you do or how much you spend) underpowered/overheavy, burn-your-leg-if-you’re-not-careful and keep-a-fire-extinguisher-handy Lurches of the motorcycle world compelling.

This bike is not mine. I it were, I’d have put it out of my misery a long time ago.

I will concede that the ironhead engine is pretty in an ugly way… like a drooling, farting bulldog whose smell and sounds you’ve grown used to. But its merits as a machine – as a better way to get where you’re going than walking – are sorely lacking. I have bikes 20 years older that I’d not hesitate to ride across the country… without a guy following me in a truck with lots of tools and spare parts and whiskey, too. This thing I’m reluctant to take farther down the road than I can walk back home in 10 or 15 minutes to get the truck, tools and whiskey.

Fix one thing – the carburetor, for instance – and something else (starter) craps out. Fix that and then the regulator or some other thing has a meltdown. Ever play whack-a-mole at the county fair?

The bike leaks constantly. Not the usual drippage one accepts from an ancient machine. I am talking puddles. Gas, oil, gear lube. It is said that Harleys bleed.

This one has hemophilia.

Nothing can be done to correct it, either. The cases are poorly machined; all the RTV in the world won’t help. And then you have iron heads and an aluminum block and the seepage that inevitably occurs as a result of the differing expansion and contraction rates.

It is a 1980 model bike that was technologically obsolete in 1965. Pushrods. A four-speed transmission. Points. The previously mentioned generator. It doesn’t even have fuses.

The startling thing is that the country which produced this thing – that’s us – managed to beat the Japanese (let alone the Germans) in World War II. How did the nation that built Iowa-class battleships derange itself to… this?

I used to wonder why Harley riders were all fat, old and tired-looking.

Now I know why!

PS: I will be a guest on Bill Meyers’ radio show tomorrow at 11:10 East Coast time discussing vehicle-to-vehicle communications and probably also this hideous business that’s brewing in Arizona (see the lead article, here). Hope you can tune in, but if you miss it, don’t worry – the audio will be posted here later in the day.

PS PS: We’re a little low on the dipstick at the moment. Please remember that EPautos.com depends on you to keep the wheels turning!