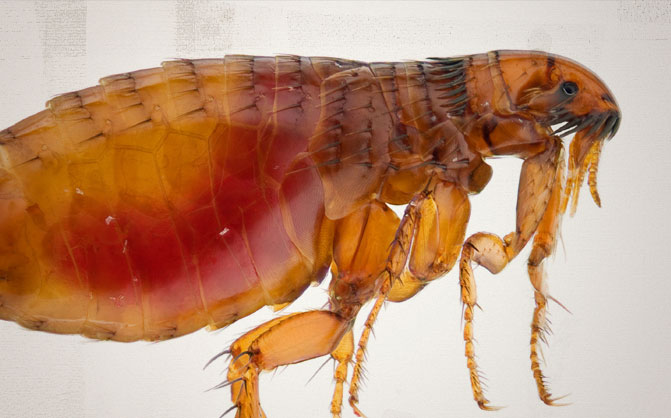 I haven’t posted here in a few days – chiefly because in between writing the rants (and responding to your comments) I’ve been playing the role of Marshall Zhukov vs. a Wehrmacht-like swarm of fleas that invaded my house as suddenly and relentlessly as the German swarm back in June of ’41. 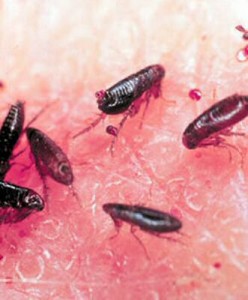 One day, my wife noticed a few – a few! – fleas on one of our many cats. Within 48 hours, there were fleas… everywhere. Upstairs, downstairs. In the garage. On the concrete pad outside the garage. If you walked outside, you’d have fleas peppering you calves. I went to the basement and found thousands of them.

Apparently, a single flea can lay 50 eggs in 24 hours. Do the math.

We hit each cat with Revolution, which is a topical applied to the high back of the cat’s neck area (where they can’t lick it off). This stuff kills the fleas that bite the cat and also render infertile any eggs such a flea lays. This step – treating your beast – is the essential first step, like holding off Von Bock and Army Group Center on the outskirts of Moscow. Then, brush each cat several times a day using a fine-toothed flea comb. I kept a paper towel at the ready, to wipe off the comb – and the fleas. Then put the paper towel in a sealed plastic bag. Get rid of it, immediately. 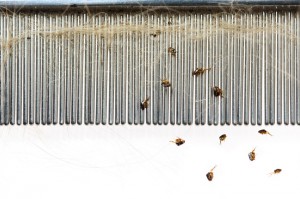 But you are still in for it, because for every flea on a cat, there are  – so I gather (and found out) at least ten more not on the cat. Those fleas are nesting in rugs, on the floor. Laying eggs in the cracks and crevices and sofas and bedsheets and every other imaginable place.

You have to kill them all to be rid of this plague.

This means – minimally – removing every removable cover/sheet and running it through the wash and then – even more important – a hot cycle through the dryer. It is heat, above all (even insecticide) that is fatal to these horrible little bastards. Every pet bed that can be washed and dried must be washed and dried. Or thrown out – and start over. All fixed furniture must be vacuumed meticulously, then treated with something that will kill the bugs but not you – nor render your future progeny Zika-like. My vet – the Richard Sorge of this odyssey – hooked me up with a product not available in stores called Siphotrol. It does to bugs what behind-the-lines Russian partisans and mobile Cossack cavalry did to the occupying Wehrmacht. 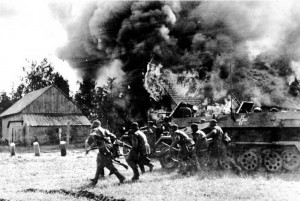 But it was not sufficient. Stronger measures were necessary. Also, economic ones. The Siphotrol is not cheap and comes in small spray bottles. You will go broke – or down in defeat, fleas feasting on your dessicated corpse – if you try to fight a serious invasion this way.

I opted for regular unleaded.

After removing the Trans Am and bikes and every other thing not bolted down from the garage, I washed the whole place out with five gallons of E10 and put Archer Daniels Midland’s finest to good use. Nothing biological that’s of this earth can survive a gas bath. Use it generously. Just remember to leave the garage door open. Or the fumes will do to you what the liquid does to the bugs. 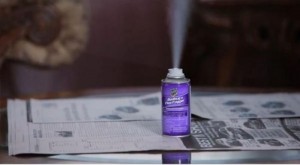 The basement was a tougher nut. Washing it out with E10 wasn’t an option. I bombed it instead. This entails buying the bombs – that’s what they are called – and setting them off and then clearing out. This phase of the operation was more like Ypres than Kursk. The bombs do not explode. They gas the jumpy little bloodsuckers. You put each can down, pull the top tab – kind of like opening an old-school can of soda – then get the hell out of there. The bombs release a cloud of death that saturates the area, then settles to the floor – where it (best part) slowly kills off the enemy and renders his (her?) already laid eggs dead. If you have yet to experience fleas – or the invasion of your homeland – you have yet to know the pleasure that comes with killing. 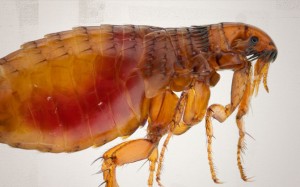 But the bombs won’t kill them all. Some – like Mengele, like Eichmann – will scatter and find refuge. You must be as relentless as the Mossad. Repeated bombings, followed by vacuuming, will be necessary. You must not stop – ever – until you are sure, absolutely certain, that every last filthy horrible one of them is dead.

And them bomb again. Just to be sure.

Keep in mind, also, that flea eggs can remain viable for months – apparently, as long as a year. If any – if even one – survived, you could be in for another round. Which is why you must continue to treat all your beasts with Revolution or some other product. Even if – like our cats – your cats are 100 percent “inside” cats. I probably brought the fleas inside the house, you see.  Either I tracked in eggs – or a flea hitched a ride on me and then transferred to a cat (fleas prefer cats to humans). 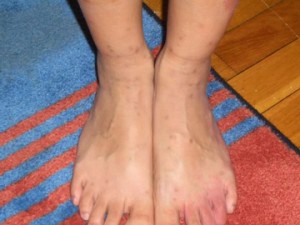 If you have fleas – or want to avoid having them – avoid wearing outside shoes inside.  Take them off before you enter the premises. I am now so fearful of the micro-hordes that I keep a bottle of Siphotrol by the steps where I take off my “outside” shoes. I take them off – and spray them down, just in case.

Also, be careful about tube socks, especially off-white ones. A flea will jump on you, burrow into the fabric and you will never see the inglorious basterd you are shuttling inside your home. But you will see his/her descendants in a few days’ time.

If, like me, you have fleas outside, you will also want to Zyklon B your yard, or at least, the perimeter around your house. Otherwise, you risk being the Host every single time you walk outside. Until you know they are all very dead, I recommend not wearing socks at all. It is much easier to see the pepper-like fleas on your calves and ankles – this is their go-to area on humans. You can then use a wettened-with-Siphotrol paper towel to wipe them off you before you take them inside with you. 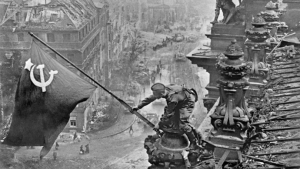 At first, you will feel like the Russians must have felt that late summer. Overwhelmed, despairing. Perhaps even ready to cut some kind of deal. Don’t despair. If you have treated your beasts, turning the tables on the invaders is a matter of determination superior to theirs. You must endure. Continue with the gassing, the spraying. The liberal use of gasoline (diesel and kerosene work also but are messier). Vacuum and then vacuum some more. Be sure to keep the vacuum – and its contents – away from not-infested areas or you will have another infestation. Throw the bag away immediately. Far away. If the vacuum lacks a bag, clean the works violently with very hot water. I didn’t even risk bringing the vacuum back into the house before I had soaked it down with Siphotrol.

Keep at it, as I did, and soon you will have the enemy by the throat. You will feel gratified, like Zhukov looking through his field glasses at the Seelow Heights in early ’45.

Ach! I almost forgot… T shirts. I’ve had several people request they be resurrected. Here’s the deaI: In order for it to be economically viable, I will need to place a fairly big order. Otherwise, it costs too much per shirt (plus postage) to be doable. How many of you would be seriously interested in an EPautos “Throw it in the Woods” T shirt? Please raise your hands! 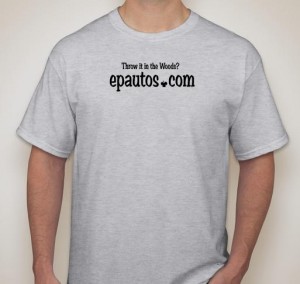 The rest: As you know, this site – like most and probably all contrarian publications – depends almost entirely on your financial support to be viable. And – more than just viable – to be a serious threat to MSM publications, which can afford the staff and other things I can’t at the moment. It would be a Great Leap Forward if I could afford to hire a tech support person, at the very least.