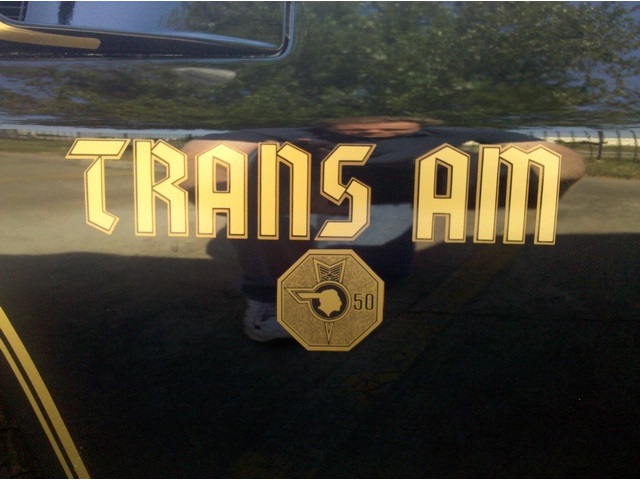 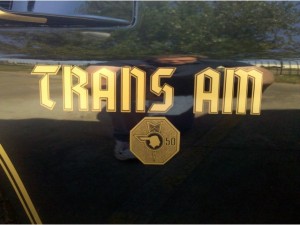 And for the Trans-Am, which by 1976 had become Pontiac’s signature muscle car.

The GTO, which had been the muscle car – and not just Pontiac’s – petered out in 1974 as a hastily thrown-together package available as an option on the Ventura, a much smaller car, both in terms of its size and its curb appeal.

It wasn’t a bad car, in retrospect. 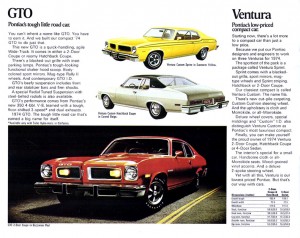 But the Trans-Am not only lingered, it prospered.

Largely – arguably – because it was still basically intact.

It had not been downsized. Or de-engined. 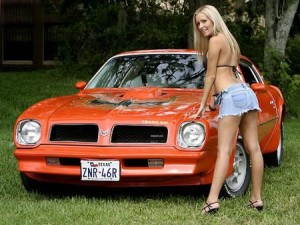 Pontiac (like everyone else making cars) had had to make some changes to accommodate the Feds – such as redesigning the front and rear bumpers to meet the new “5 MPH” impact standards. But had done so artfully – without ruining the car’s good-looks.

Pontiac – which pioneered the use of plastic-urethane and body-colored bumper covers (the late ’60s GTO got them first) applied the same technique to the Trans-Am, which resulted in a sleek-beaked front clip that was much more stylish than the awkward-looking metal bumpers grafted onto pretty much every other car.

Including the Trans-Am’s corporate cousin, the Chevrolet Camaro Z28.

Which, by the way, was no longer available. 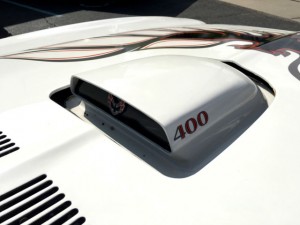 Chevy cancelled the Z28 after the 1974 model year, deciding that the muscle car market was dead or soon would be. This proved to be a big mistake – one that Chevy would spend the rest of the ’70s regretting.

Because it left the Trans-Am as the only player still on the field. It had the market – which still existed – entirely to itself.

Whether it was accidental good fortune or savvy strategic thinking will likely never be known, but the fact remains: Pontiac kept its powder dry. 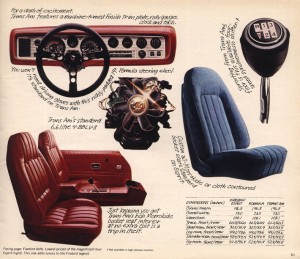 You could still get a really big V8, arguably the defining attribute of a true muscle car. Even more so than horsepower.

Truly, the ’76 TA was the last of the Mohicans. 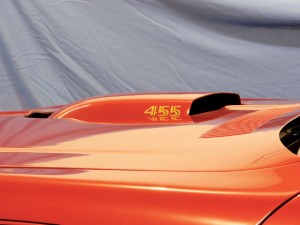 Like the Trans-Am itself, the basics were still there.

A weekend spent undoing the damage done by Uncle (especially the Y pipe single exhaust that fed both banks of the V8’s exhaust through a single, hugely restrictive catalytic converter) and the factory-delivered 200 hp 455 could be revived to a very credible facsimile of a 455 HO or even an SD 455.

And the rest was still there, too. 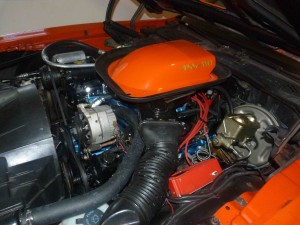 The Borg Warner Super T-10 four speed, a box that made the same sweet music in ’76 as it had in prior years. The shaker scoop – which Pontiac thoughtfully left fundamentally intact as well. A “block off” plate – there to appease Uncle – had been placed to render it temporarily non-functional.

Three bolts undone and the scoop once again scooped. 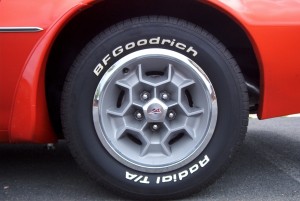 And it would be the last time you could order Pontiac’s unique Honeycomb wheels – which looked aluminum but weren’t. A Pontiac engineer named Bill Porter designed them, developing what Pontiac later called “Polycast” technology to manufacturer them. Rather than cast out of aluminum – which Porter had originally intended – a urethane composite material was injection-molded onto a steel rim, giving the appearance of aluminum.

They looked great but were – unfortunately – very heavy. They were replaced beginning in ’77 with a new (and actually aluminum) Snowflake wheel, which was offered in both 15×7 and (later) 15×8 sizes – the latter another first for an American car (other than Corvette).

The ’76s also still had the 8,000 RPM tach  – with 5,400 RPM redline – which was a relic of the Trans-Am’s earlier ’70s high-RPM engine days. This tach would be replaced by a more functionally realistic (for the late ’70s) 6,000 RPM tach while the 160 speedometer that had been standard since 1970 would likewise disappear in favor of a more politically correct 100 MPH unit. 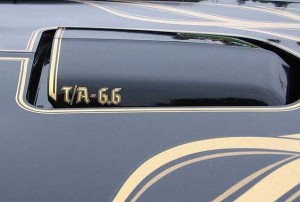 1976 was also the last year for the single (and round) headlight front end. In ’77, Pontiac restyled the car with a new quad rectangular headlight front clip – along with a new flat hood and a revised (smaller) shaker scoop that was no longer made easily functional. It was molded out of a single piece of fiberglass and to make it actually scoop air, it was necessary to cut out the rear section – permanently altering it.

Also, the engine ID callouts on either side of the shaker now made their proclamations in metric – “6.6” liters rather than “400” cubes. 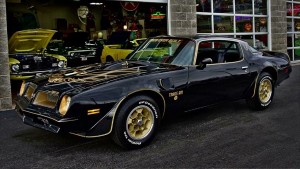 Pontiac – working with the film company – has agreed to provide new ’76 TAs for the movie, which was to have helped promote Pontiac’s jubilee year by featuring a Limited Edition ’76 TA. These Limited Edition/50th Anniversary cars were the first Trans-Ams to come painted black and gold and also had gold Honeycomb wheels (the first – and only – time Pontiac ever offered these) and also cool-looking German-style fraktur script for the “Trans-Am” decals and other badges. 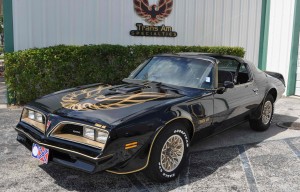 But production delays intervened and rather than put out a new film (Smokey would reach theaters in 1977) featuring an old (1976) car, the ’76s Pontiac had donated for use in the movie were fitted with ’77 front clips and the new aluminum snowflake wheels.

Several of these cars gave their lives for the cause. 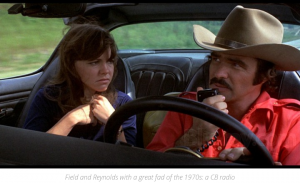 Also, that there were 455 (not 400) engines under the shakers of the stunt cars.

But it was no less glorious.