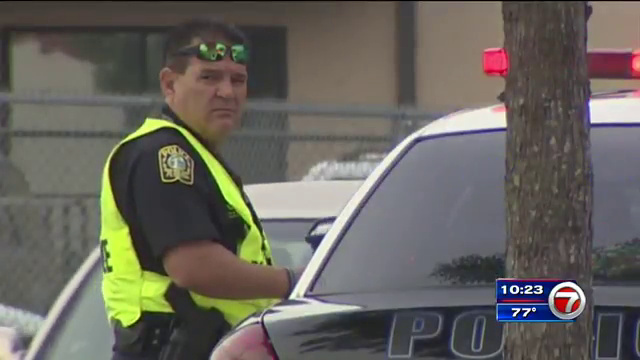 A mother from South Florida says she received five citations, including a felony charge, from a police officer who retaliated against her for simply telling him she didn’t appreciated the way he was blocking traffic.

According to Kristy Hernandez, she was attempting to drop her son off at Ben Sheppard Elementary School in Hialeah, but had to wait 20 minutes on Miami-Dade Schools police officer Ismael Castilla to ticket another driver.

The woman says the “oblivious” officer made her son and other students late for school while various parents honked their car horns at him and told him to get out of the way.

On dash-cam video recorded from inside Hernandez’s vehicle, she can be heard telling the officer as she passes him, “The students are late to school because of you. I’m going to be sending this to your supervisor.”

Hernandez was pulled over only a few seconds later for an “obstructed” license plate because “MyFlorida.com” could not be seen at the top of her tag. The dash-cam video recorder captured what happened next.

In addition to receiving a ticket for the tag frame, officer Castilla ticketed Hernandez for failing to show him the car’s registration and proof of insurance, even though she maintains both were in the car.

She was then ticketed for having the dash-cam recorder because Castilla said it was “obstructing” her view. It was the next charge however, that made Hernandez hysterical.

Having first pulled over in a manner that left Castilla’s patrol car sticking out into the road, Hernandez can be seen on the dash-cam video pulling up so that he could park without blocking traffic again.

For doing so, Hernandez was charged with fleeing and eluding, a third degree felony that carries penalties of up to five years in prison or five years probation, a $5,000 fine and a mandatory driver’s license revocation that can last between one and five years.

“Everyone was beeping at him, and all because I said, ‘You are not doing your job properly.’ He signaled me out,” Hernandez said. “I felt violated. I felt victimized. It’s clear to see that he did it in retaliation.”

According to a legal expert, Hernandez “can say she does not like the way the officer is doing his job, but he cannot retaliate and charge her with a felony.”

“By the way, [Castilla] wrote the felony charge incorrectly, and it’s not valid at all,” the legal expert added. “As for the other four citations, a judge will see what happened here and throw them all out.”

A Miami-Dade Schools police spokesperson said if Hernandez “believes she is innocent of the citations, she has the right to address her concerns during the judicial process.”