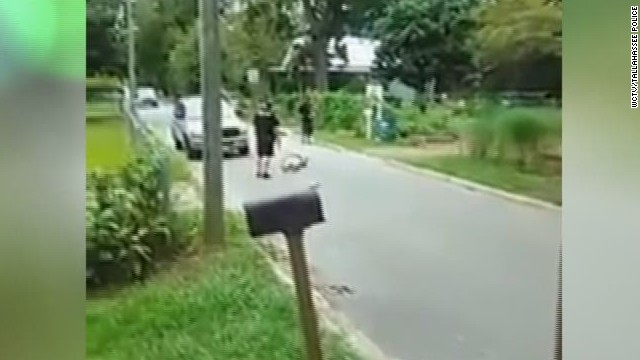 (CNN) — A Florida police department is investigating one of its officers after he shot a 62-year-old woman in the back with a Taser on Tuesday afternoon.

The incident was captured on videotape by a nearby witness.

Officer Terry Mahan of the Tallahassee Police Department and other officers responded to complaints about open-air drug sales in the area, the police department said in a statement Wednesday.

Probable-cause affidavits paint a scene in which officers feared for their safety because of angry residents berating police and calling others to the scene.

Police had detained three people when Viola Young “approached the police car inquiring about one of the individuals arrested,” the statement said.

“An officer advised her to stay back, and a second officer approached Young and attempted to place her under arrest.”

In the video, Young can be seen yanking her arm out of Mahan’s grasp before turning and walking in the opposite direction.

She takes only a few steps before the officer fires a Taser cartridge into Young’s back.

The woman collapses face-down on the pavement, then rolls over onto her back. Another police officer approaches Young and arrests her.

In a narrative included in a probable-cause affidavit, Mahan wrote that he went to the scene after officers there called for backup.

We he got there, he saw two officers engaged with two suspects on the ground, and “there was a crowd of people that had gathered around them and were yelling at the officers,” he wrote.

As Mahan put one arrested suspect in the back of a patrol car, Young pulled up, forcing Mahan “to take [his] focus off of one of the arrestees and engage her,” Mahan said in his report.

“Young’s actions obstructed officers while in the course of completing their legal duties,” he wrote.

Mahan told Young to leave. She responded that she wanted to know what was going, but Mahan told her, “now was not the time for that,” and instructed her to leave again. She refused, he wrote.

“I informed Viola Young that she was under arrest and reached out and took her left arm. Young yanked away, turned and began to move away from me in an attempt to defeat her lawful arrest,” Mahan wrote. “I deployed my Taser, and fired one cartridge striking Young in the back. Young was incapacitated and fell to the ground.”

Mahan took Young into custody “without any further resistance,” he wrote in his report.

From another officer’s narrative, it appears police had to leave soon after the arrests “due to the hostility of the individuals remaining at the scene.”

Young was medically cleared by Leon County Emergency Medical Services before being sent to the Leon County Jail, along with the other three individuals arrested, police said.

None of the four faces drug-related charges.

They all were charged with resisting an officer without violence, and Laguna Young was charged with a probation violation that Leon County Jail records indicate stems from a previous conviction on cocaine and drug paraphernalia charges.

Laguna Young was the only one of the four who had not been released as of Wednesday afternoon.

It’s not clear if Laguna Young, 41, is related to Viola Young.

After reviewing the video of the tasing incident, Tallahassee Police Chief Michael DeLeo called for an internal investigation, he said.

“We will conduct a thorough investigation into this incident. We want to be transparent with the community by sharing what we can at this point, including the video,” DeLeo said in a statement.

Mahan has been placed on administrative leave with pay while the investigation is being conducted, DeLeo said.

Because the case is now part of an internal affairs investigation, “this will preclude us from making any other statements, other than what is in our release, in regards to this case until the full investigation is complete,” police spokesman Officer David Northway said.

Night in jail for fleeing from aggressive non-uniformed cops.