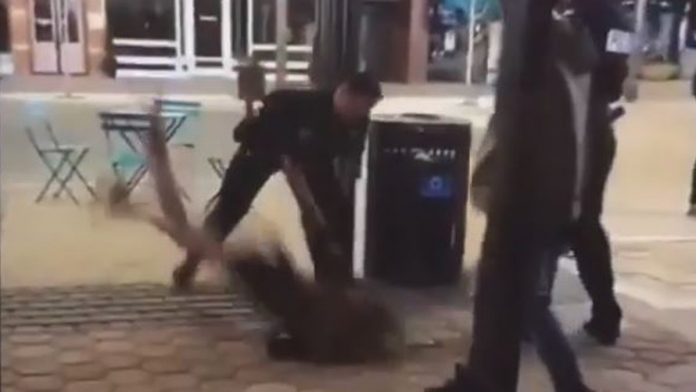 Have you noticed that it’s become common – if not practice – for armed government workers to force people to the ground, knee in the back – guns trained on them – as part of seemingly every arrest?

Violent men, okay. They are potentially a “threat” to the “safety” of armed government workers. But what about men not violent? Women not “resisting”? Junior high kids?

They are being “taken down” just the same.

It is apparently part of the new protocols. Armed government workers have been trained to use what amounts to Shock and Awe (remember?) techniques against any indig – whoops, citizen – who even questions their authority – let alone resists it.

Here’s an example I found after all of 6 seconds of searching on YouTube. Yes, I timed it.

The video shows the “takedown” of a motorist who, having been stopped by armed government workers – apparently was found to be motoring on a suspended license. It’s a whole ‘nother thing as to whether we – allegedly free people – ought to have to beg the government’s permission for a license to travel freely by car. The government having made it all-but-impossible to travel without a car.

In pre-car days, one did not have to have a permission slip to operate a horse – or a horse and buggy. The roads were common right-of-ways and it was taken as self-evident that free people had the natural right to travel upon them without begging permission or needing “papers” to do so. The idea that “public safety” demands that people carry around government permission slips is as risible now as it was then. A horse and buggy could run you over just as easily as a car and could be driven recklessly and by a “dangerous drunk,” too. The difference now vs. then is that people back then valued their liberty while today’s masses tremble in fear of risks which have always existed but are now neurotically obsessed over. And of course, value liberty as much as a fish pines for the desert. 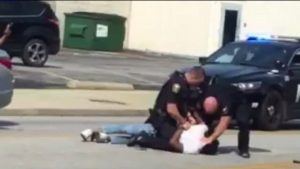 But that is not the meat of the video.

The truly marbled portion comes after the male motorist disappears under a scrum of armed government workers. And as his girlfriend/wife becomes the object of their attentions. 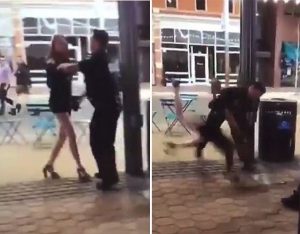 And yet, a bullet-headed one of them rushes her very aggressively, wrenches her arms backward and then gratuitously – but likely procedurally – face-plants the woman on the tarmac.

It’s a brutal tactic – intended to brutalize. To degrade and show who is boss. To be thrown onto the pavement, face-first, is humiliating. Which is precisely the purpose of this tactic. There can be no question of this when the object of the face-plant is not “resisting” or violent and when the armed government workers haven’t even asked the person to “turn around put their hands behind their back” and give them the opportunity to comply without being face-planted – as used to be procedure and protocol.

Face-planting and bullet-heads barking to “get on the ground, now!” are recent developments, part of the transformation of police into law enforcers. Emphasis on enforcement.

Even when contrary to law.

It is not an exaggeration, much less hysterical, to state that armed government workers are degenerating into a beer-bellied American SA, the once-infamous but increasingly less famous to government “schooled” Americans street thugs deployed by the National Socialist Workers Party (most Americans are similarly ignorant of the socialist component of “Nazi,” for the same reason) to bash heads in. 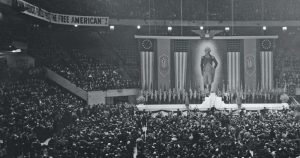 Encouraged to do so by the leadership.

The leader – it sounds better in German – Herr Trump (whose real name is apparently the more Germanic-sounding Drumpf) recently did exactly that, publicly egging on today’s SA to not be overly “gentle” with the hoi polloi.

He also just rescinded the previous semi-ban on equipping civilian law enforcers with military hardware, including armored (and heavily armed) vehicles meant to deal with IED-deploying indigs, which are now us, too.

It is a measure of just how far we are down a very dark road that both of these ugly eructations passed like a minor blip on the radar screen. No Big Deal. We grow used to such things.

There were a few negative comments here and there – almost exclusively in the liberal press and only because the to call to thuggery as policy was made by a right-winger (Herr Drumpf). Very much of a piece with the Rote Kampf Bund communists’ harangues about the abuses of their national socialist adversaries, that long time ago. 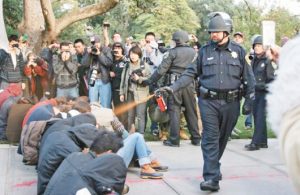 The same liberal (left-wing) press would cheer the same call to thuggery if urged by one of their own against those not of their own.

Very precious few Americans appear to be appalled by thuggery in principle.

Most appear to want more – and so will get it.