I stumbled on this video and it cheered me almost as much as that scene in Independence Day, when the Aliens give an electric enema to the White House. It was taken by a heroic  Dodge Challenger driver, who decided not to stop when an armed government worker – a law enforcer/”hero” – lit up his tax collecting Christmas lights. I think it will make you smile, too:

Reader Question: Headers Worth the Hassle? 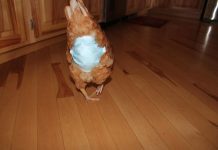